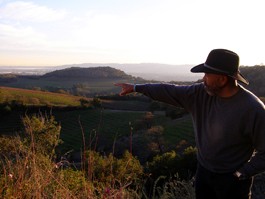 This Shouldn’t Even Be a Story

When it comes to wine, there are only two colors: red and white

The way Vance Sharp III tells it, he and Mac McDonald couldn’t help but strike up a conversation when they found themselves walking toward each other at a wine auction. “There aren’t many people like us around here,” says Sharp, with characteristic understatement. The two men also discovered that both were getting started in second careers in wine. That conversation led to the founding of the Association of African American Vintners (AAAV), now a 10-member group that seeks to promote awareness of minority-owned wineries and help educate consumers. ~

Taking a casual look around, anyone will discover that there exists a singular lack of African Americans in the wine business. Let’s crunch a few numbers. The latest research finds that at least 10 percent of the nation’s wine drinkers are African American, similar to the group’s share of the population. Out of more than 5,600 U.S. wineries, however, fewer than a dozen wineries—a few tenths of 1 percent—are actually African American&–owned. That they exist at all is a continuing source of surprise—not least of all to African American sommeliers and wine enthusiasts.

Despite these findings, some say that industry interest remains surprisingly lax. In bringing these issues to light, AAAV members can help the wine business generally to connect with this diverse population of 39 million Americans. Their mission is to increase their visibility as a trade group; to help open up new wine careers through scholarships; and to encourage others to develop their own appreciation for wine. Being for the most part successful boutique wineries, they could scarcely sell more wine anyway—no matter who demands it.

The AAAV’s first meeting was a barbecue at McDonald’s house in Windsor; the fourth annual meeting and winetasting was a COPIA event also celebrating the Juneteenth anniversary of slave freedom. During a panel discussion of winemakers, Daniel Bryant of Running Tigers Wines spoke to the audience at large when he stated, “Our goal is to create a day when it’s not a surprise if the sommelier is a person who looks like you.” Indeed, the hundreds of attendees bucked the trend of the typical Napa wine event, a demographic reversal.

During the question-and-answer session, someone noted that cognac brands such as Courvoisier have teamed up with hip-hop artists—might they try a similar marketing approach? But the vintners rejected the idea of being associated with the blingerati. Judging from the audience reaction, it was universally unpopular. “We’re in this for the long run,” explained Bryant. “We must produce nothing but the best—and I think you know why that is,” he intoned.

Some AAAV members’ wines are rapidly becoming stars of the trade, earning high points from critics and in competitions. Negotiating between recognition both of otherness and excellence is the tricky part of their task. Ultimately, in wine there are two colors: red and white. Nevertheless, making reference to their heritage is an important consideration for some. Mac McDonald’s Vision Cellars sports an iconic African ceremonial mask on the label, making it really pop amid a shelf of $60 Pinot Noirs. McDonald says he initially thought of an elephant for his label, then considered a hippo and a variety of other designs. But it turns out that hippos are bad-tempered, so eventually he came back to the jaunty little elephant, in part because of its connotation of memory. “A wine has to be memorable,” Vance Sharp of Sharp Cellars says. “Otherwise, it’s lost in the sea.”

Their stories share a thread with those of many vintners who, smitten with wine earlier in life, are able to realize their deferred winemaking dreams after other careers. McDonald remembers the fruit wines his family made in his childhood in East Texas, where his father was an accomplished distiller of moonshine. But he didn’t care for spirits, until he had a palate-altering experience with a sip of Burgundy in 1955.

After a career as a PG&E supervisor (and a few trips to France), he has realized the “vision” that had captivated him all those years back. Usually seen wearing his trademark straw hat, McDonald’s charismatic manner makes him a natural spokesman for the group, and he spreads the word across the nation. In the Monticello region of Virginia, he discovered Sugarleaf Vineyards, apparently the only African American&–owned winery on the East Coast, and encouraged them to join the organization.

Sharp came to California by way of a 20-year detour in Europe. While serving in the Air Force, he met his wife Monika in Germany, and stayed on. He worked there as a shipping executive, and then operated a car dealership in tony Wiesbaden. When he moved to Sonoma in 1997, Sharp initially looked out over his property and thought that a vineyard would make great landscaping. One of his neighbors was Phil Coturri, who was interested in buying the grapes.

Sharp took viticulture classes at SRJC, and by 1999 had planted an estate vineyard at home as well as one in the Skaggs Island area, each named for his grandchildren. “But the more involved I got in it, the more I wanted to be identified with it,” Sharp says. Before long, he was releasing wine under his own label, with Coturri as consulting winemaker.

Sharp has an easygoing, personable manner. Wearing a black western hat, he gestures toward his rambling villa and jokes, “You want 5,000 square feet? I’ve got more than I need.” In his cellar, he keeps vintage Rieslings from his life in Germany, and admits a weakness for buying amusing special edition salmanazars—those oversized bottles that improbably hold some 12 times as much wine as an ordinary vessel—at auctions, such as John Lasseter’s Toy Story edition.

There is no public tasting bar, so Sharp lays out several vintages for a guest on his black felt pool table. Although he calls the pop of the cork “the most beautiful sound in the world,” he’s switching to Stelvin enclosures (screw-top) with his next vintage. Sharp tuned his palate in Europe, so perhaps he was thinking of the wine of Alsace when he planned the Sonoma Coast vineyard. His 2003 Pinot Blanc has the taste of rich pineapple, subtle acidity with vanilla and honeysuckle on the nose, and was served at a White House dinner that celebrated Black Music Month.

A flight of his Pinot Noir shows a trend toward earthy bouquets of hay on layers of bright candied fruit. But it’s the Zinfandel that originally had people asking Sharp, “Where can I get more of this?” The 2003 Hailey’s Creek Zinfandel is crafted in the Coturri way, with natural yeast fermentation leaving a bit of residual sweetness that carries the intense fruit over the tannin, yet the alcohol is moderate, and it plays its own uniquely intoxicating blackberry melody on the palate. The Sonoma Mission Inn does good trade in this Zin at $25 a glass.

Sharp remembers one day when he was pouring next to Gary Farrell’s booth at an event. At first people crowded around Farrell, anxious to get a taste of the big name Pinot. But as word got out about Sharp’s wine, “by the end of the day it was a little different story,” he chuckles. Even Farrell employees were eagerly trading him bottles. People will find their way to the good stuff.

Back at last year’s COPIA discussion, one young man posed a rather technical question involving the relative merits of single varietals versus blends, and so on. McDonald paused significantly before joking, “We are just now getting people out of Ripple.” The audience roared. Of course, that fortified wine brand of the 1970s is long gone, and it won’t be long before no one even understands the joke.