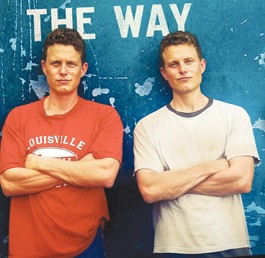 Filmmakers Logan and Noah Miller create their own luck

With a tender film and a rollicking memoir under their belts, Logan and Noah Miller are lucky guys. Or are they? “I think luck happens when you work your tail off and you put yourself in a position where, if you see the opportunity, you can jump on it,” Noah declares.

“And you have to be prepared,” adds his softer-spoken twin brother, Logan.

For these bright and charismatic Fairfax natives, who between them seem to carry the force of the sun, success has been especially hard-won—and, yes, has involved plenty of preparation. Let’s just say the odds were against them.

The Miller brothers’ turbulent working-class upbringing, marked by a lovable but alcoholic father, drove them to the sanctity of the baseball field. “We couldn’t have played any more baseball than we did growing up unless God had made more hours in the day,” they recount in their memoir Either You’re In or You’re in the Way: Two Brothers, Twelve Months, and One Filmmaking Hell-Ride to Keep a Promise to Their Father (Harper; $26.99). The discipline of athletic practice, paired with a fierce work ethic, would become the seed of their creative success.

The twins left West Marin to attempt careers in the minor leagues, only to return at the devastating news that their dad had passed away. Local roofer Dan Miller spent the last 15 years of his life homeless, camping out in Samuel P. Taylor Park, and died in the Marin County Jail in 2006.

The average person wouldn’t have responded to such tragedy with a screenplay, much less a beautifully produced film starring the award-winning likes of Ed Harris. But there’s nothing average about the Miller brothers.

By all accounts, their film Touching Home never should have been made. When the Miller brothers set out to make the movie as tribute to their father, they had no money, no industry connections and no experience.

“You probably can’t start any lower in the business than we did, if you just want to put that down on paper,” Noah instructs.

They were not only new to the film biz, but to the practice of writing. Too busy playing catch and laying shingles with their dad to be star students, they’d never bothered learning to type. Even after a reckoning with instructional typing software, Noah remains averse.

“I will not touch a keyboard,” he says defiantly. “That will just ruin it.” Creative flow is apparently a delicate thing, even for a burly baseball player.

“Noah will write freehand and I’ll type, and then we’ll blend what we wrote,” Logan explains.

Such an intimate mind-meld is only to be expected; the twins share almost everything (even their underwear, as they willingly point out).

Their process resulted in the screenplay for the 2008 release of Touching Home, which, after hundreds of rejections, won them the Panavision New Filmmaker Grant. Though prestigious, the grant wouldn’t begin to cover the cost of the film. So the twins began taking out credit cards—17, to be exact. The “hell ride” so well chronicled in Either You’re In had begun.

The soaring triumph echoed throughout the book is that the Millers, in search of the perfect lead actor to play their father, cornered Ed Harris in an alley behind the Castro Theater in San Francisco. After they propped their laptop on a metal Dumpster and showed their two-minute film trailer, Harris agreed by handshake to do the film. The cavalier strategy will likely go down as indie film legend—and was no dumb luck.

“It’s not like we walked down the street and found a million dollars, ” Logan remarks wryly. “There were so many steps along the way that had to be accomplished before we could get in front of Ed Harris.”

Recalling the attitude that drove them to the Castro Theater and beyond, Noah reflects, “We’ve always kept this hope and optimism that, OK, this is just short-term. But long-term, there‘s where we’re gonna go!”

Indomitable in spirit, the Miller brothers radiate a graciousness and positivity that, for all their hard work, make it clear they feel lucky indeed.

“We appreciate a challenge,” Logan says. “It’s just something that helps kinda give a richness to life.”