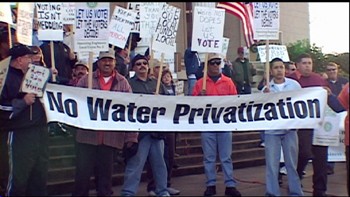 And Not a Drop To Drink: ‘Thirst’ examines whether water is a commodity or a right.

‘Thirst’ is a frightening forecast of water wars to come

No Californian should need a reminder of the importance of water. But the documentary Thirst by Bay Area filmmakers Alan Snitow and Deborah Kaufman (Secrets of Silicon Valley) should scare even locals used to the cycle of flood and drought. The 62-minute-long work focuses on the struggle over water rights between private and public ownership.

Visiting the 2003 Third World Water Forum in Kyoto, the filmmakers record outbursts between activists and the representatives of the World Bank, who endorse the privatization of national water supplies. John Briscoe, the World Bank’s senior water adviser, claims that free water for all is an activist’s fantasy; he even dismisses the idea of water as a universal human right.

Briscoe is opposed by Maude Barlow, chair of the Council of Canadians. She decries the rounding up of the world water supply as “a theft of the commons,” referring to the enclosure of common pasturage in England at the dawn of the Industrial Revolution (or the fencing-off of the prairie that’s always the first sign of trouble in a cowboy movie). What once was everybody’s property becomes privileged and billable.

Elsewhere, Thirst shows how, in India’s parched Rajasthan, the charismatic leader Rajendra Singh tries to find a medium between the government-owned water schemes and the backbreaking village method of carrying jugs from a water hole. Singh also protests the local branches of Pepsi and Coca-Cola for draining the aquifer to make sodas and bottled water.

Some of the material here overlaps with the documentary The Corporation, such as the scenes of riots in Cochabamba, Bolivia, triggered by the Bechtel Corporation’s water privatization contract.

But the most in-depth section of Thirst is quite local. Snitow and Kaufman cover the political fight between Stockton mayor Gary Podesto and a grass-roots group pushing a referendum against selling off Stockton’s water contracting to the overseas Thames Water.

Podesto and his partners spent a lot of money trying to head off a vote against a much smaller volunteer group. Still, the mayor has a point. Budget cutbacks make it attractive for a city to sell their waterworks. The best argument against de-municipalizing services is one I heard when interviewing with Mark Achbar, co-director of The Corporation.

“These days, you hear about public-private partnerships,” Achbar said. “But a partnership is a relationship between equals. Corporations want the general public to think of them as an equal to government, not subservient to it. Yet government is an institution that we have every right to speak back to, to protest against. The corporation has no such accountability, yet it wants to be perceived as having that power and that role that government serves.”

Thirst is an admirable account of the struggle over Stockton’s water, a struggle that may soon be repeated in other cities. But it has missed opportunities. Though Briscoe’s little sound-bite is chilling, more of him would have been informative. Because it’s partisan, Thirst‘s footage of the Kyoto conference gives the impression of a clash between droning bureaucrats and outraged activists. Was there any middle ground?

Thirst also touches upon what happened when Atlanta privatized. Again, more would have been helpful. In 2003, without much public comment, Atlanta broke its contract with United Water, the U.S. subsidiary of Suez Water, 16 years (!) before the contract was supposed to run out. Accusations of brown water and lousy service were rife. The film leaves open rich material for follow-ups.

Thirst has an urgent message to an unguarded public that won’t miss its water until the well runs dry.

‘Thirst’ shows at the Smith Rafael Film Center on Wednesday, July 7, at 7pm only. Filmmakers Alan Snitow and Deborah Kaufman will be in attendance for a post-film discussion. 1118 Fourth St., San Rafael. 415.454.1222.