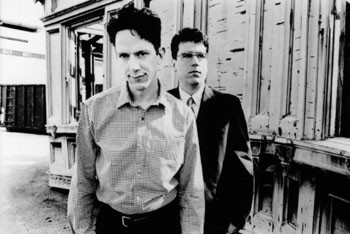 Their songs often had a certain childlike charm, so when the college-radio hits dried up for They Might Be Giants, the quirky alt-pop band made a natural shift in strategy–they recorded a straight-ahead album of children’s music.

The resulting enhanced CD, No! (Rounder), is a family-oriented disc that features special interactive sequences allowing fans of all ages to both listen to the music and play along to animated segments. The songs are a kooky and contagious mix of infectious melodies, skewed humor, and all-around goofiness (reminiscent of the Eels but without the social angst) and include such science-obsessed ditties as “Where Do They Make Balloons?”, “The Edison Museum,” and an ode to those rare souls blessed with supertasting taste buds. There’s even a song written from the point of view of a grocery bag.

No!, which marks the band’s 20th anniversary, is a career move that hasn’t surprised longtime fans. After all, TMBG picked up a Grammy Award earlier this year for the sweetly defiant “Boss of Me,” the theme song to the hit Fox-TV comedy Malcolm in the Middle.

Originally a duo, the band hails from Brooklyn. In the beginning, cofounders John Linnell and John Flansburgh played all the instruments in the studio themselves–an eclectic blend that ranged from keyboards and accordion to guitar and woodwinds. On the road, they were backed by synthesizers, drum machines, and tapes.

In 1986, the duo enlisted the help of band mates and released an eponymous debut. The album generated the surprise college-radio hit “Don’t Let’s Start,” which made waves on MTV thanks to an experimental music video. Two years later, the band matched its success with the song “Ana Ng” from the Lincoln album, capturing the attention of major labels.

In 1990, TMBG signed with Elektra Records and released the quintessentially quirky alt-rock album Flood, which produced the hits “Birdhouse in Your Soul” and “Istanbul (Not Constantinople),” the latter being a remake of the 1953 hit by the Four Lads.

During the ’90s, interest by MTV and mainstream rock radio fell off, especially after the release of 1994’s experimental John Henry album, but the band continued to tour on the college circuit and consolidated a core of cult fans.

Having made the world safe for such campy bands as Weezer and the Bare Naked Ladies, TMBG are so comfortable with their status that the band has no qualms about putting the following warning label on their latest CD: “The end of the album’s song sequence is specially designed to expedite slumber, so listeners should not operate machinery or plush animals while listening to the last three songs.”

Can you imagine Smash Mouth making that statement?

When the North Bay club and concert scene is good, it’s very good, and when it’s bad . . . ah, who even wants to contemplate that? Jamaican dancehall legend Yellowman and the Sagittarius Band bring their crucial dance riddims to the Last Day Saloon in Santa Rosa on July 21. The show is part of a scintillating series of top reggae acts hosted by DJ Sister Yasmin (try and catch Rasta troubadour Prezident Brown and the Orchestra of Judah at the Last Day Saloon on July 24) . . . Folk and blues great Geoff Muldaur comes to the Powerhouse Brewing Co. on July 21 . . . Brazilian rock guitar sensation José Neto, inspired by Hendrix and Santana, rocks the house July 27 at 19 Broadway in Fairfax. Meanwhile, this tiny venue has landed the world-music coup of the year: the Mighty Sparrow, the undisputed calypso king of the world, shakes it up there on July 27 . . . Telecaster master Bill Kirchen, who has recorded with the likes of Nick Lowe and Commander Cody and His Lost Planet Airmen, rides the steel breeze into Sweetwater on July 27 . . . And Cuban jazz piano great Gonzalo Rubalcaba headlines the Green Music Festival on Aug. 4 at Sonoma State University.