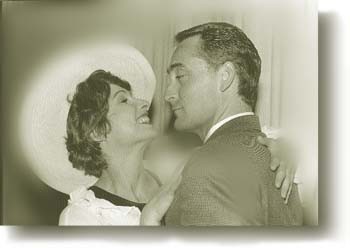 On Stage: Rebecca Dines and Joseph Lustig in ‘The Philadelphia Story.’

The year in theater sat well

WHILE THE THEATER season pays no attention to the swings of the solar and lunar calendars, beginning instead like an inverted almanac with those seasons that start with the harvest and end with the sowing, reviewers must doggedly define the year by the 3-6-5 that ends in December and begins the next day with a headachy jump to Jan. 1.

Thus, in addition to the fashioning of twiggy photo frames to shamefacedly give as gifts, reviewers must frown over a year’s worth of columns (surely one is a better writer than that!) and make some sense of the Year That Was.

In Sonoma County theater it was a remarkably good year, with several companies doing some exceptional work. As with all things, changes have been wrought over the year, most notably at Actors Theater, where artistic directors Eric Engdahl and Theresa Gianotti have left, citing the “amicable differences” phrase that means so little to so many.

AT had a tough year with plenty of misses and only one solid show, playwright Steven Dietz’s Lonely Planet, a serious comedy about the AIDS epidemic, superbly acted by Michael Fontaine and Dwayne Stincelli. Another small good thing was their Parallel Lives: The Kathy and Mo Show. Fresh, feminist, and funny, this overly indulgent piece was nonetheless innovative in direction and scope.

Actors J. Eric Cook–formerly of Sebastopol’s Main Street Theatre–and Argo Thompson are working with AT chair Tom Harris on the scheduling and vision for the new season, as well as adding their thoughts to the revamping of what’s left of the current roster. No news yet on what the inaugural show will bring.

Administrator Ross Hagee has announced his resignation at the Santa Rosa Players, effective as soon as he can be replaced. “I may be here until June,” he laughs. Hagee hopes to leave his office duties in mid-January, though he’ll still be seen pounding SRP’s boards. “This organization and I have very different goals,” he says tactfully. “But I still plan to be here as a director and an actor.” Hagee, who was recently seen in Sonoma County Repertory Theatre’s excellent production of A Sondheim Affair, will make good on that promise by directing January’s production of Dangerous Liaisons and performing in the subsequent mounting of Carnival.

The Players had their usual year: when they’re good they’re very, very good, and when they’re bad, well. . . . Of note was Hagee’s early-year direction of a joyous production of Pippin. This fall’s The Wizard of Oz was also a delight, and although this reviewer missed Brigadoon, the buzz is that–with its ambitious sets and live music–there was much to miss.

The Pacific Alliance Stage Company over at Spreckels had two outstanding shows, both featuring the remarkable actress Rebecca Dines. PASCO started the year with the absorbing dramedy Lake No Bottom, a wicked chuckle that places a writer on an isolated weekend with his toughest critic and the woman they both love. Sort of. Dines was next seen in a frothy Katherine Hepburn tribute in The Philadelphia Story, a sumptuous, big-stage setting of Philip Barry’s jocularly wise play. Dines, a working professional, is a sure indicator as to why PASCO shells out the small bucks for Equity actors.

Main Street Theatre and its companion stage, the Sonoma County Repertory Theatre, continue to mount the most reliably entertaining productions in the county. One of the thrilling moments of the year came on the stormy opening night of MST’s Blithe Spirit, a Noel Coward send-up of the afterlife, smartly directed by Jim dePriest. When shortly into the performance the power blew in Sebastopol, actress Priscilla Sanford–who was, after all, preparing onstage for a séance–missed nary a beat, calmly chatting into the dark while theater staff secured enough candles to light the action.

Sanford also shone in Playboy of the Western World, Main Street’s contribution to the Sebastopol Celtic Festival. Putting more sensuality into the phrase “shearing sheep” than a lonely shepherd on a solitary hill, Sanford and actor Jennifer King had a ball with this patricidal comedy about a foolish young man who becomes a town hero when he claims to have bashed his Da over the head.

Sonoma County Rep flared beautifully with Moss Hart’s affectionate send-up of the theatrical world, Light up the Sky, and ended the year with the joyous revue A Sondheim Affair. Though overly reverential of Stephen Sondheim’s genius (and this is a criticism?), Affair was so tightly rehearsed by creator and director Mary J. Gorak, was delivered with such passion by the cast, and featured costumes so beautifully wrought by Holly O’Hara, that it deserves special note.

Actor Guenevere Wolfe stole every stage she stepped on, featured in both Light up the Sky and Affair. Robin Downward earns a nod for his naive gaiety in Pippin and for the overall professionalism and beauty of his voice. And Jim Sampietro didn’t get proper notice from this paper for his performance in Affair, in which he sang the starkly beautiful ending tunes from Sweeney Todd.

Indeed, it was a fine year to sit in the dark.