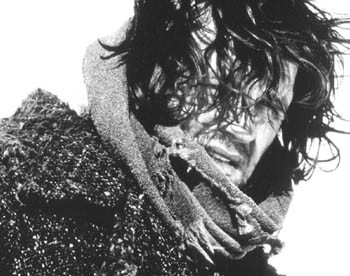 ‘The Widow of Saint-Pierre’

Death takes a holiday in ‘The Widow of Saint-Pierre’

“MEN CAN be bad one day and good the next. I’m sure of it.” So says Madame La, the indefatigable heroine of The Widow of Saint-Pierre. Played with typical effortless grace by Juliette Binoche, Madame La is a woman propelled by the courage of her convictions–even if her ideology places all that she holds dear in jeopardy.

Cloaked in cardinal red, the energetic beauty cuts a fiery figure in the provincial island village of Saint-Pierre, off the coast of Newfoundland, where she is stationed with her equally formidable husband, Le Capitaine (Daniel Auteuil), a well-respected but unorthodox captain in the French army. The couple’s intense passion for each other, paired with their modern attitudes, sets them apart–both from the community’s haughty ruling class and the from beaten-down islanders.

When a local man kills another in a drunken rage, it becomes the talk of the town. The controversy multiplies when the killer, Neel Auguste (Yugoslav director Emir Kusturica), is sentenced to die for his crime. In 1849, capital punishment was meted out in perfunctory fashion with no hope of appeals. The method of choice was the guillotine, (nicknamed “the widow,” hence the film’s title).

Only one problem: Saint-Pierre has no guillotine, forcing the town elders to demand one from France, a bureaucratic process that takes many months. Until its arrival, the convict is to be kept under lock and key by Le Capitaine in a prison adjoining his living quarters.

When Neel, a burly, rag-clad giant, is delivered to the prison, he immediately attracts the attention of Madame La. A humanist to the core, she feels that keeping the man in darkness and isolation for many months would be cruel and unusual punishment.

Her solution is to enlist his aid in the construction of a greenhouse. The structure is designed to shelter a collection of plants as strange and exotic as she–species that are having a similar difficulty adapting to Saint-Pierre’s dank and chilly clime.

To his credit, director Patrice Leconte (The Girl on the Bridge, Ridicule) creates a suitable tension in these early interactions–it’s a Beauty and the Beast scenario, to be sure, and Madame La (shot lovingly by Eduardo Serra) is certainly ravishing to behold. We know too little about Neel to gauge whether he, too, is be trusted. This ambiguity allows us to see Madame La as most would–as a bit of a flake, initially, but soon her logic and compassion are too compelling to resist.

As the months pass, Madame La extends Neel’s activities to doing odd jobs in the village. One day he performs an act of such heroism that no one (except a few politicos who fear losing face) can support his execution. This dilemma centers the film’s argument for rehabilitation. Unlike the much-ballyhooed Green Mile, which depicted an innocent man being sent to an unjust death, The Widow of Saint-Pierre adds many more shades to its anti-death penalty stance by choosing to tell the story of a basically good man who made a single fatal mistake.

With The Widow of Saint-Pierre, Leconte delivers a riveting, provocative film with big themes, extraordinary performances, and a visual elegance that defines it as one of the finest films to hit American screens this year. And considering the pro-capital punishment stance of the current leader of the free world, its timing just couldn’t be better.