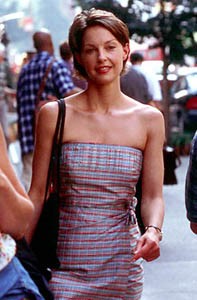 Livestock doc examines cow theory of ‘Someone Like You’

COW THEORY. Perhaps you’ve heard of it. First proposed by Laura Zigman in her comic novel Animal Husbandry, Cow Theory has just gone Hollywood–and is suddenly on the lips of moviegoers across the country. A lot of those lips are laughing. Some are bellowing in protest. But Dr. Jeff Pelton is laughing, because he knows a thing or two about cows.

In Someone Like You, the film version of Zigman’s book, Ashley Judd plays a jilted woman who authors a magazine column in which the no-good, cheatin’ nature of all men is compared to the sexual behavior of bulls.

All this is based on the shocking scientific discovery that a bull will never mate with the same cow twice. Which is bull. But I’ll get to that.

Once copulated with, goes the theory, a New Cow becomes an Old Cow, and a bull would rather end up on a bun at McDonald’s than touch her again. In the movie, scientists slather an old cow with the scent of a new cow, but the bull won’t buy it. He knows where he’s been, and he ain’t going back. That’s why men have trouble with commitment, why men cheat, why men are scumbags. Because sooner or later, a man wants a new cow.

Now, I’m not here to defend men. I mean, who could? Anyway, the ones getting the bad rap in this movie are the bulls.

AFTER GOING over a few sexual terms–estrus refers to a female in heat–Pelton quotes from one of his textbooks: “Bulls may serve an estrus female a number of times (1 to 10 or more) depending on his sex-drive, the stimulus pressure, and the female–who often terminates sexual contact at some point with evasive tactics.”

Hmmm. Sounds right. Pelton adds that some bulls will service a single female up to three times in a half hour. “Same bull, same cow. Boom, boom, boom,” he remarks. Now wait a minute. Three times in 30 minutes? Hell, based on the lag time the average human male needs between procreative episodes, it sounds like most guys could take a few pointers from the bulls of the world.

It gets better. “If you throw a bull into a pen with a number of cows in heat–and we’ve never been able to come up with a better ‘heat detector’ than a bull: it’s like freaking radar–a bull will go to the cow that is in the best heat,” Pelton explains.

“If you want to get even more psychological,” he adds, “it’s been shown that if you put two bulls in one pen with a lot of cows in estrus, the breeding goes up. There’s a competition. It’s always a good idea to put two bulls in the pen, because they kind of get jacked up seeing each other breed.”

I’m sure there’s a human parallel to that phenomenon, but who wants to go there?

“I heard another theory once, from a woman who was studying psychology,” Pelton says. “She said that women actually gravitate toward different kinds of men at different times during the month.

“When they’re getting ready to ovulate, they have a tendency toward being drawn to guys who are just, you know, out cruising the bars. But during the off periods, when their hormones are quiet, they are generally drawn to men who are more stable.

“I don’t know if that’s true or not,” the doctor says, laughing. “That’s just something I picked up in a bar.”