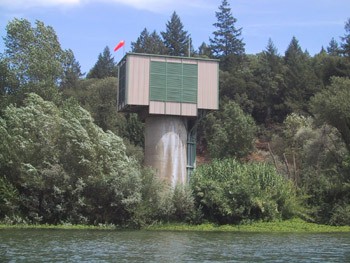 Suck It Up: In one low flow scenario, Water Agency collectors could become obsolete.

Earlier this year, the Sonoma County Water Agency (SCWA) came up with an elegant new moniker for its ungainly named Water Supply and Transmission System Project. Since February, when the agency notified local water users that it was preparing a new environmental impact report (EIR) for the system, it’s become known simply as the Water Project.

The agency’s mission is to expand the Water Project–the labyrinth of pumps, pipes and storage reservoirs that stretches from Potter Valley to Northern Marin County–to provide 600,000-plus people in the region with enough water through 2035. That mission may be in serious jeopardy, thanks to ongoing challenges from environmental activists and various government regulatory agencies.

To address those challenges, the agency held several “scoping sessions” this spring permitting activists, scientists and law firms involved in numerous disputes with the agency a chance to have their positions included in the Water Project’s EIR, scheduled to be completed in late 2006.

A common criticism in many of the scoping comments submitted to the agency concerns the fact that the “new” Water Project doesn’t incorporate much in the way of new knowledge and technologies learned during the past decade.

“The need for the project and project description should be updated to account for 10 years of progress in water-conservation technologies and strategies and changes in development plans throughout the county,” notes Ellison Folk, an attorney for Shute, Mihaly & Weinberger, which represents Friends of the Eel River (FOER). “Most importantly, the project description should not rely on increased diversions from the Russian River, but should evaluate methods to reduce, or at a minimum maintain, existing water-supply diversions over the lifespan of the project.”

However, the SCWA continues to insist that it needs a 35 percent increase in water taken from the Russian River in order to meet the projected growth in Sonoma County’s general plan. Geologist Jane Nielson says that’s way more water than the agency needs.

“The only possible rationale for increasing water supply by 35 percent when the population will only increase by 27 percent is not to serve the projected growth, but to stimulate it,” Neilson says in her comments.

Moreover, the only way the agency can achieve the increase is by continued dependence on the Eel River diversion at Potter Valley. Yet that formulation completely ignores the First District Court of Appeal’s landmark 2003 decision in favor of the FOER, which found that the water agency had failed to consider how the 180,000 acre feet per year diverted from the Eel River into the Russian River watershed might be affecting the Eel’s depleted salmon fishery.

“The water agency continues to focus on the Russian River watershed and accord scant attention to impacts on the Eel River,” notes attorney Stephan Volker, who represents numerous conservation groups. “It does not appear that the water agency has gotten the court of appeal’s message.”

The Eel River diversion has already been reduced by 15 percent during the crucial summer months, and most observers predict further reductions are coming. The water agency will have no choice but to turn to the water in Lake Sonoma for its planned 35 percent increase. That presents a logistical problem, since the water can’t be released directly from Warm Springs Dam into Dry Creek and then into the Russian River, because it could destroy endangered salmonid populations in those areas. A special pipeline would have to be constructed. Yet as Brenda Adelman, chair of the Russian River Watershed Protection Committee, notes in her scoping comments, the report doesn’t mention “the probable need for a pipeline to get the Lake Sonoma water supply down to the diversion facility.”

The diversion facility, the system of “collectors” near Forestville that draws Russian River water through gravel beds into the agency’s transmission system, is threatened by the National Marine Fisheries Service’s so-called low-flow proposal, which in one scenario calls for removal of the rubber dam that creates the infiltration ponds for the collectors.

With Russian River water seemingly blocked at every turn, the SCWA may have no choice but increase groundwater pumping. Yet here, too, substantial obstacles present themselves. For one, as geologist Nielson notes, the definitive United State Geological Survey (USGS) study of Santa Rosa Plain groundwater will not be completed until 2009. In the meantime, the SCWA has no groundwater management plan.

“It is irresponsible to propose additional municipal reliance on wells . . . without a groundwater management plan,” she charges. “It is unconscionable to do so before the USGS Santa Rosa Plain groundwater studies are complete. The result could be greater depletion of both surface and groundwater supplies.”

The agency’s water conservation efforts remain controversial. Although it insists it’s doing a good job, last November the State Water Resource Control Board warned the SCWA not to request any more Russian River water until conservation efforts have been demonstrably improved. Yet conservation is barely mentioned in the notice for the new EIR.

Neither are changes in climate due to global warming, an omission the Occidental Arts and Ecology Center’s Brock Dolman finds disturbing, given the region’s propensity for droughts. “With projected increases in the average annual temperature . . . it is highly likely that climate conditions will increase in variability and uncertainty,” he suggests.

Can the water agency adapt to global warming, not to mention the demands of environmentalists? Perhaps. Sonoma County Water Agency spokeswoman Emmett says that’s the essence of the scoping process. “The purpose of the comments is just like it sounds–to determine the scope of the project,” she says. “It’s a public process, and we’ll make all of the necessary modifications.”