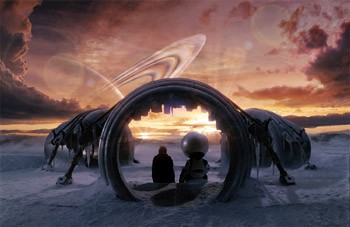 ‘The Hitchhiker’s Guide to the Galaxy’

Apocalypse Now!: Comedian Geoff Bolt registers some professional disappointment that the earth didn’t explode as well as it could have in ‘Hitchhiker’s Guide.’

On the combustive impact of ‘Guide’

Having acquired large cups of strong coffee to chase the taste of artificially buttered popcorn from our aggrieved palates, comedian Geoff Bolt and I have located a secluded spot in which to discuss the film we’ve just seen, The Hitchhiker’s Guide to the Galaxy. Based on the popular books by the late Douglas Adams, the new film features ugly aliens, two-headed politicians, singing dolphins and the complete and total destruction of planet Earth.

In anticipation of said demolition, I’ve brought along a laptop and a couple of DVDs–Star Wars: A New Hope and Superman–each featuring other prominent planetary explosions. As I’m cueing up the destruction of planet Krypton in Superman, I ask Bolt–a noted comedian and actor, frequent sidekick of Steve Young in an award-winning series of Toyota commercials and the big brain behind Bolt’s Unified Field Theory, a traveling variety/science/comedy/improv show–to tell me what he thought of Hitchhiker’s Guide.

“What’s the best exploding planet you ever saw on film?” I ask.

“That would have to be Star Wars, wouldn’t it?” Bolt replies. “Alderaan blowing up. That was so sad. ‘I’ve felt a great disturbance in the Force, as if millions of voices suddenly cried out in terror and were suddenly silenced.’ It reminded me of my early days in elementary school, though it wasn’t a million voices; it was more like 300 of us, K through six.”

With that, I push “Play” on my laptop, and the planet Krypton neatly explodes in a tremendous blast of combustible confetti-like stuff, enhanced by the eerie, creepy sounds of metallic shards being twisted into unnatural shapes.”Wow! That’s a pretty good one!” Bolt admits. “It’s always a little bonus when a planet explodes in a movie, isn’t it? I think all movies should have exploding planets.”

“It would have improved My Best Friend’s Wedding,” I point out.

We are now ready to watch the granddaddy of all exploding planets, the aforementioned demise of Alderaan in Star Wars.

“Punch it,” Bolt says. I hit “Play.” Surprisingly, for all its dramatic buildup and digitally added impact rings when the planet blows up, the destruction of Alderaan turns out to be much shorter in duration than either of us remembered.

“I think they didn’t linger as long on it as in Superman,” Bolt suggests. “It’s like they cut away too fast out of respect for the dead or something, but that diminished the impact a little. And the sound effects in Superman were better, I think. OK. I change my mind. I’d now have to say that Superman has the better exploding planet.

“And I have to say,” he continues, “and I don’t know about you, but compared to Superman and Star Wars, I was kind of disappointed with the way Earth blew up in Hitchhiker’s Guide to the Galaxy. Earth didn’t really explode so much as implode, and that just felt wrong. I think they chintzed out on us. Of the three, Hitchhiker definitely has the least impressive exploding planet. ‘Here you go, stuck-up humans. You think that the death of your planet should be really big and impressive and dramatic. Well, look at this–all you get is a little poof, and it’s gone.’ Isn’t that ironic?”

“I think it probably was the point,” Bolt agrees. “It’s about the futility of our dreams and the grandiosity and self-aggrandizement of our pathetic little species, the inherent falseness of our own sense of specialness in the universe. Hmm . . . OK, now I’m depressed. Maybe we should watch Krypton blow up again. It seems to help.”