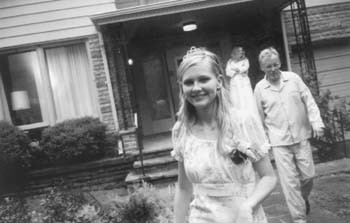 SOPHIA COPPOLA’S debut as a director, The Virgin Suicides, is mannered and occasionally pretty, noteworthy for some tantalizing glimpses of Kirsten Dunst, who plays the second oldest of a tribe of five girls in an upper-middle-class suburb circa 1975.

The narrator (Giovanni Ribisi) explains that these Lisbon sisters–Cecilia, Lux, Bonnie, Mary, and Therese–are the golden hearts of the neighborhood. They are the unaccountably beautiful daughters of the Lisbons–a dull math teacher (James Woods) and his highly overprotective wife (Kathleen Turner). All five girls are, we’re told, doomed, especially the one whom the camera shows the most interest in, she with the tony name of Lux (Dunst), which means “light” in Latin.

The first of these episodes in the life of the Lisbon sisters begins with the suicide of Therese (Leslie Hayman). When a doctor confronts her as someone too young to feel depressed, Therese squelches him: “Obviously, you’ve never been a 13-year-old girl.”

According to Coppola, this logic is unanswerable, and yet you’d love to have it answered. The narrator sums it up: “We knew that they knew everything about us, and that we could not fathom them at all.”

As Coppola presents this quintet of misses, they aren’t fathomed. Coppola takes their yearning with an adolescent’s own sense of drama and just hopes we’ll identify. But the girls are as unknowable to us as they are to the boys. And yet we see so much more of them than their young male suitors do. We see the insides of their house, we hear their private conversations–and note that mostly what they do is lie on the floor and pine.

The turning point of The Virgin Suicides is a prom night during which Lux gets in trouble through a combo of peach schnapps, pot, the music of 10cc’s “I’m Not in Love,” and the attentions of the most charismatic boy in school (Josh Hartnett).

After this night, Lux and the rest of the girls are pulled from school and kept walled up in their house by their furious mother. Lux is the only one who rebels–even in a self-wounding way–by becoming promiscuous.

The clue to the sisters’ ethereal behavior should be in the parents, but Coppola doesn’t find it. There’s redder dirt in Turner’s Southern accent than usual–which could be evidence that she construed this part as a bitter-comic role. Certainly Mrs. Lisbon is the heavy in the film, even if the narrator tries (vainly) to get the mother off the hook for the religious hysteria that undoes her family.

The narrator tells us of the confusing “estrogen haze” in which the father lives. It’s a witty description, and Woods’ lonely father is amusingly underplayed. Yet The Virgin Suicides has such a thick estrogen haze that it almost fogs the lens, a drugged quality that reflects the narrator’s perhaps untrustworthy claims that these girls are unknown and unknowable and, by implication, too good for this world.