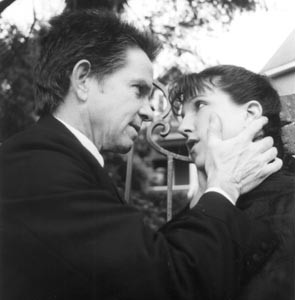 The Turn of the Screw

Turn of the Screw.

REMEMBER that kid in sixth grade who thought he had devised the perfect visual pun when he showed you a cylindrical rod incised with helical threads and asked, “You wanna screw?” That kid now writes theater criticism and cannot forgo the sundry puns and innuendo lurking in the title of Main Street Theatre’s Halloween production, The Turn of the Screw (a gaunt retelling of the Henry James story by playwright Jeffrey Hatcher). Simply put, audiences are advised to “go get screwed.” You’ll like it.

A heap of gothic ballyhoo prime for Halloween consumption, The Turn of the Screw depicts a 19th-century governess (deftly portrayed by Jennifer King) embarking on her first gig at–where else?–a haunted manor. In her charge are the recently orphaned Flora and Miles, two troubled kids who are both apparently receiving tutelage in the black arts from the specters of two deceased domestics.

The new governess fixates on uncovering the manor’s back-story, which chiefly concerns the amorous foibles of a dead valet and the governess’ drowned predecessor. The spirits of these doomed lovers seem dead-set on evicting the children’s souls so that they may inhabit their bodies–a plan the new governess is determined to thwart.

Director Diane Bailey invigorates Hatcher’s bland script by investing the production with an interesting self-consciousness. The players fool subtly with the work’s tendency toward overt melodrama without undermining what is a genuinely freaky work. Campy asides are adeptly interjected throughout (most sound effects are comically produced by an offstage actor, and strobe-lighting abounds), which lightens what might otherwise be a brooding production. Hatcher’s script is the real ghost here, a pale shadow of James’ original work that relies too much on anecdotes, as characters recount events instead of enacting them. So be it. The two-person cast still succeeds in making it creepy.

King’s governess is joined onstage by Scott Phillips, who undertakes the schizoid task of portraying the play’s remaining characters, including a weirdo uncle, a nattering housekeeper, and the demon-child Miles.

Phillips particularly shines in his portrayal of young Miles. It’s no easy task for a grown man to play a little boy, but Phillips is convincing as he prances about the stage, flinging dollops of irreverence at the audience from his silver spoon.

King portrays the governess’ innumerable flights into hysteria with chilling mastery. Her frenzies increase naturally until she’s completely unhinged and flooding the stage with convulsing sobs. Her palpable fear inspires vicarious feeling. This is what makes the show scary: not the ragged thews of Hatcher’s plot, but the contagious horror transmitted by the players.

Beware: The Turn of the Screw will go home with you and weave itself into the fabric of your dreams, inspiring nightmares. To quell these nasty aftereffects, it is suggested audiences take some medicinal spirits. You might try some vodka and orange juice.