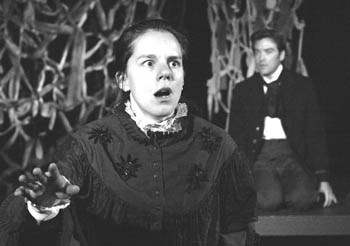 ‘The Turn of the Screw’

Cleaning House: Victoria Rhoades and Steven Abbott, as the governess and her guv’ner, face down evil spirits.

AT delivers chilling ‘Turn of the Screw’

What children want is a mystery,” exclaims one confused adult in The Turn of the Screw, now onstage at Actors Theatre. And the audience, in its heart, wants to shriek, “Amen!” Who hasn’t felt the vertigo that comes from looking into a child’s eyes and suddenly sensing a spooky inscrutability?

The weird unpredictability of kids has launched a thousand plots. But it’s used to particularly good effect in this drama, playwright Jeffrey Hatcher’s adaptation of Henry James’ tale of suspense set in Victorian England. Hatcher has assigned all the story’s roles to two actors: Victoria Rhoades and Steven Abbott in this AT production directed by Sheri Lee Miller.

The plot is a masterpiece of confounded expectations. A naive young governess (Rhoades) stumbles across what seems to be a dream job. She’s hired by a gentleman playboy (Abbott, who also plays every other part here) to take full charge of his orphaned niece and nephew, who live in a remote country mansion.

Alas, the governess quickly discovers that her employer’s job description omitted some important facts, including juvenile delinquency, insanity, a couple of corpses, and possibly an evil spirit or two.

Her young charges are deeply troubled. The four-year-old girl, Flora, will not utter a word. The boy, Miles, has been expelled from boarding school for what the headmaster calls “unspeakable acts.” And then there’s the house itself, which has a dark history. Soon, the governess is spotting lurking figures on the tower and finding bizarre riddles written in her bible.

Eventually, she persuades the only other adult present, a harried housekeeper, to tell the truth: the previous governess perished under mysterious circumstances after getting involved with the mansion’s knavish manservant, who is also now dead. The governess comes to believe that the lovers’ spirits are lingering to exert a malign influence over Miles and Flora.

But that turns out to be the weakest scene in the play, which quickly builds a strong head of steam. Rhoades delivers an excellent performance as the governess, offering a subtle transition from bright-eyed enthusiasm to more complicated emotions.

As the fey Miles, Abbott is simply a wonder. He moves and talks like a 10-year-old boy, and he offers a delicate portrayal of Miles’ mental disturbance. As the governess starts to see evil influences at work in the boy, she talks of seeing “a smile like the glitter of a drawn blade” in his face. Abbott fully delivers on that description, yet still manages to leave his character’s motives open to interpretation.

Indeed, it’s the uncanny chemistry between Rhoades’ governess and Abbott’s Miles that distinguishes this production. That chemistry also focuses attention on an often overlooked theme in the original story: the essential strangeness of kids.

When the lights dim, the audience is left with the distinct impression that there is the adult world and the world of children, and between them a gulf so deep that adults can drop all their preconceptions and idealized notions into it and never hear them hit the bottom.