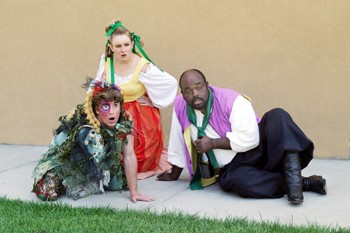 Photograph by Seymour and Macintosh

Shakespeare, like Hollywood, was not a big crafter of spectacular roles for adult women. Go figure–back in the Bard’s day, willowy adolescent boys played the female roles, and it was often easier for them to convincingly pull off virginal maidens than worldly mothers.

So the mother-daughter relationship does not get much service in Shakespeare’s plays; rather, it’s fathers and daughters (e.g., King Lear) that get the lion’s share of attention. In the Napa Valley Shakespeare Festival’s production of The Tempest, the shifting of the sorcerer Prospero to the sorceress Prospera–the thwarted duchess of Milan–alters the focus from father-daughter to mother-daughter, and thus introduces an intriguing new set of dynamics to the play.

Years ago, Prospera’s brother Antonio usurped her dukedom and set her adrift on a decaying boat with her daughter Miranda. They now occupy a tiny, featureless island where Prospera dotes lovingly over Miranda and asserts her magical powers over the shapeshifting servant Ariel and the pathetic half-fish, half-witch creature Caliban.

When a tempest threatens a ship carrying the king of Naples and his party (including Prospera’s wayward brother Antonio), Prospera conjures up winds to draw the ship to the island. The king’s son Ferdinand washes ashore alone–much to Prospera’s design–and soon he stumbles upon the nubile Miranda.

Beth Kellermann’s Prospera isn’t so much a dynamic, all-powerful force on the island as she is a maternally vengeful manipulator. She yearns to preserve Miranda’s youth, yet it’s clear that her daughter’s ambitions are outgrowing the confines of the island.

Nesbyth Rieman and Chester See make fairly tepid young lovers Miranda and Ferdinand. Miranda spends the duration of the play in constant wide-eyed wonder that borders on simpering, while Ferdinand comes across as little more than a Disney cipher.

The comic trio of Caliban, the drunken butler Stephano, and the wenchlike cook Trincula steal the show with their bright, playful costumes and stumbling intoxicated antics. They’re obviously having a blast onstage. Wallace Henderson Ingalls’ wonderfully loathsome Caliban looks like he crawled out of a radioactive swamp, creeping lowly across the periphery of the set and speaking as if the barnacles encrusting his sickly green arm also infested his throat.

As Ariel, Natalie Adona brings a lithe athleticism to the weightless “airy spirit.” She soars across the set, poised and fluttering and unflappable.

Napa Valley Shakespeare Festival artistic director Mary Fullerton (who also directed the play) and costume designer Loran Watkins do a fine job of integrating the costumes, props, and puppetry (courtesy of the Magical Moonshine Puppet Theatre, and a dramatic extended metaphor for Prospera’s control over the island) so that the distinction between real and unreal is blurred into enchanted swirls of fabric, skull-faced phantoms, prancing goddesses, and decaying trails of flotsam. Music and song have always played an important supporting role in The Tempest, and the music and sound effects never fail to chime in just as magical doings stir.

This is the Napa Valley Shakespeare Festival’s second season at the Napa River Mill, and The Tempest is a natural for its outdoor riverside setting. As twilight falls, random seagulls swoop into the set’s rafters, and cool breezes set Prospera’s enchanted cape fluttering. Guests at the very nearby Napa River Inn can sit out on their rooms’ balconies as if they were box seats, and theatergoers can purchase wines and foods for a posh theatergoing experience. Which is nice, but this gender-shuffling Tempest needs no liquid spirits in order to sweep its audience away.