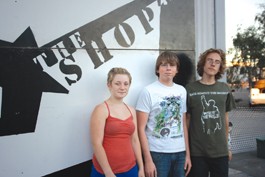 The Shop in Sonoma

To the casual passerby, the Shop doesn’t look like the crown jewel that it is; it’s pretty much a dingy warehouse in the middle of nowhere. But for almost 10 years now, it’s served as a haven for the area’s teenagers, providing a stage for budding young bands and a drug- and alcohol-free hangout on weekend nights. Far from the stifling environment of a city-run, adult-mandated “teen center,” the Shop is run almost entirely by its own teenage volunteers.

For this reason, we honor those known as “the Shop kids”—past, present and future—who work extracurricular hours creating an environment with lasting effects to benefit not just the kids who frequent its corrugated steel walls, but also the entire community at large.

On a recent Saturday night on the outskirts of Sonoma, outside the warehouse before the show, the kids pass the time by reminiscing about the craziest things that have gone down at the Shop.

“This one band—I don’t wanna say the band name—but the drummer is just fuckin’ crazy!” says soundman Will Wedell, 16. “It was their last song, and he was just really riled up, so he started playing the cymbals with his snare drum, and totally just punched over his whole set! And then another time, they came back, and the same guy started to play cymbals with his head, and got a big cut on his head, and there was blood everywhere!”

Other hijinks abound: “I went to sit on the couch once,” adds Jessica Grimm, also 16, working the door, “and about 20 people piled on top of me.” Fifteen-year-old events booker and concession manager Will Doran chimes in. “We had a big rap show once,” he explains, “with a costume contest for whoever could have, like, the most old-school kinda outfit, and there was some 60-year-old lady with a clock around her neck!”

With its emphasis on wine, food, and festivals, Sonoma isn’t exactly the most stimulating city for a teenager; both Doran and Wedell speak the words “wine country” in the same sort of resigned tone that baseball fans reserve for the Yankees. Opportunities to get involved locally usually require serving the adult community, either by volunteering at festivals or working retail jobs for tourists. For the kids, the ability to create their own community is vital.

“A big factor for teenagers,” says Shop co-director Dave Robbins, a bona fide grownup, “is that they have to feel that most of what they’re involved in is theirs, that they’re a part of it.” There’re always older chaperones at the shows, ready to assist if needed, “but there’s not a whole bunch of adults monitoring them,” Robbins stresses. “We just let them be themselves, and generally, that’s the best way to go.”

In addition to the way the Shop has changed local attitudes toward youth in general, the kids of Sonoma themselves are all obviously better off. “I like being able to come out here,” says Doran. “I like music a lot, and now I can get into shows for free, even if I have to work outside all night.”

Perhaps Wedell has seen the most positive change. “Right now,” he testifies, “if I didn’t have the Shop, I would probably be sitting in a corner crying about how there’s nothing to do in Sonoma.

“Because there really is nothing to do in this town.”