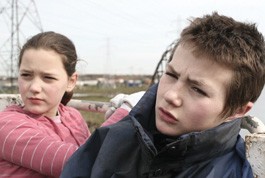 The quiet moments that make up the indie film Kisses, directed by Ireland’s Lance Daly, might be sold on the same shelf as Once, but this tale of young runaways in Dublin is much better and sharper in music, sentiment, tempo, landscaping, use of space and, most importantly, humor. Any story of squalid surroundings and lost kids needs humor among the sadness and disgust, and this comes from the film’s opening shot, a tight close-up of an upside-down goldfish wearing that particularly reproachful look that only a dead goldfish can have. Later, Christmas lights flash the words “Ho Ho Ho” on the side of a truly unhappy house. The humor here, to say the least, is the dry kind.

Dylan (Shane Curry) and Kylie (Kelly O’Neill) are next-door neighbors in a part of Ireland one would prefer to drive through at 65mph, and fortunately there’s a highway so folks can get out fast. A vast, cold and smelly-looking fen faces the two children’s houses. A trickle of little bastards, mini-bike riders and pram-pushers harass the kids every time they go outside in the concrete front yard. But getting outside is a good idea, even in the raw December weather.

From the way Kylie tries to avoid the man, it’s clear that her Uncle Maurice (Sean McDonagh) makes her do things. Dylan, even at age 11, has developed a face like a fist, as well as a fine case of stress-induced asthma caused by living with his volcanic dad. (The man is first seen threatening to punch some sense into a broken toaster.) After a fight breaks out between the two, he and Kylie make a break for it.

Kylie has some pound notes stashed in her shoe, and she and Dylan hitch a ride to Dublin on a barge that dredges the shopping carts out of the local canals. In the city, they spend all their money on new clothes and candy, and end up at night without food or shelter. Dylan’s brother vanished into Dublin’s skid row two years before, and Dylan has half an idea to track the long-missing brother down.

Daly makes this adventure impressionistic, with a focus on the kids’ faces and the city they discover. During their trek, the two runaways are guided by a suite of songs by Bob Dylan; “Shelter from the Storm” gets the most screen time. The only problem is that Kisses starts to look a bit aimless in the center. Until the arrival of an involved action sequence involving a runaway car full of perverts and LED-lit, wheeled sneakers, the film spins its wheels

Additionally, Daly uses the Jim Sheridan trope of always having the nicest people in the film be immigrants, such as the friendly foreign barge operator or the West Indian lady who gives the film its title. This tends to make immigrants look leprechaunish, an unfortunate return to stereotypes of the Irish in American films.

Yet Curry looks right and has all the menace and weakness of a mistreated kid. As an actor, his voice isn’t completely there, and the conviction in the lines he’s saying sometimes wavers. The young Kelly O’Neill, by contrast, leaves nothing to be desired in the part; she has the adroitness and softness that Christina Ricci had when she first became a child actor. All told, Kisses is a winner, a smart, sweet film with gentleness that never devolves into mere softness.