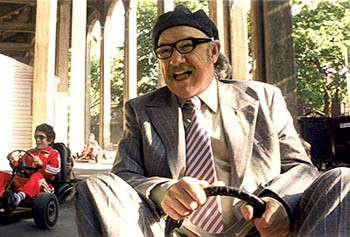 “Wow. Um . . . This could possibly bore me.” Andrew Sean Greer, author and self-described “secret nerd,” has come to a dead stop here at the far end of the Exploratorium, the world-renowned San Francisco museum famous for its whimsical blend of science, technology, and art.

Having worked our way past hundreds of humming, buzzing, spiraling machines, echo tubes, tornado chambers, and circular wave umbrellas, we’ve come to the entrance of a special exhibit. Titled “Mathematica: A World of Numbers . . . and Beyond,” it promises to be a series of displays demonstrating various principles of mathematics.

Admits Greer, “I’m like a kid. I love to watch all the machines and push all the buttons, but I’m kind of too impatient to stand around and read all the explanations.”

Thankfully, “Mathematica” has no shortage of buttons to push and levers to pull. But we’re not really here to learn about minimal surfaces and projection geometry anyway. No, we’re here to discuss The Royal Tenenbaums, the critically lauded oddball of a film starring Gene Hackman, Luke Wilson, Ben Stiller, Gwyneth Paltrow, and Anjelica Huston.

In the movie, which follows a New York family full of one-time geniuses, Hackman and Huston play the long-divorced parents, Royal and Etheline, whose kids were all child prodigies who’ve grown up into outrageously failed adults. Chas (Stiller), a mouse-breeding entrepreneur, is now a paranoid safety addict. Margot (Paltrow), a playwright whose first work was staged at age 12, hasn’t written a word in half a dozen years. And Richie (Wilson), a one-time tennis champ, has been living on a cruise ship since a dramatic meltdown on the court at Wimbledon.

Since The Royal Tenenbaums explores the eccentric underbelly of genius, it only seemed fitting to bring our discussion of the film to the world’s most eccentric science museum. And who better to discuss it with than Andrew Sean Greer, author of the sensational new novel The Path of Minor Planets (Picador, $23). A poetic, surprising story of love, sex, death, and meteors, Greer’s novel features a very large array of brilliant astronomers and hard-driven scientists, none of whom–like the poor Tenenbaums–is all that adept at negotiating everyday life on Earth.

“One of the things I liked about The Royal Tenenbaums,” says Greer, “was the way it shows that smart people, even geniuses, are also very ordinary people with very ordinary problems.”

We’ve stopped to stare at a tall, narrow, glass-fronted box illustrating the concept of the bell curve. We watch as little balls randomly fall from above, bouncing down through a maze of pegs, each coming to rest in one of many slots at the bottom. While a few balls make their way into slots at the far edges of the box, where they sit all alone, the majority end up in a great big pile right in the middle.

“That,” Greer remarks, “is really eerie.” We move on, pausing again at the celestial mechanics display, a giant model of the solar system resembling a misshapen funnel. At the push of a button, a steel ball is released to race around the diameter of the funnel, gradually slipping lower and lower with each revolution down toward the exit hole at the center.

“I read this one book about the sociology of scientists,” says Greer, one eye on the ball as he talks. “It was very moving. It told about the career disappointments of brilliant people, how you could be an academic star in graduate school but then get assigned to a job at a nonresearch university–and then you’re stuck in that position forever, unable to move on to Harvard or somewhere important, because you’re forever viewed as a nonresearch kind of scientist.

“How disappointing that must be,” he continues. “I never thought about that before. I just always assumed that brilliant people got to do whatever they wanted to do.”

This brings him back to the Tenenbaums. “We assume that if, as a kid or a young person, you write a hit play or figure out a way to make a lot of money or establish yourself as a sports prodigy, then you’ll live happily ever after,” he says. “Or at least, that you’ll amount to something. These people didn’t, and they have no idea what went wrong.”

“And still,” I suggest, “everyone, secretly, wants to be a genius. Or at least be thought of as smart.”

“I think most people do think of themselves as smart,” he replies, “whether they are or not, while a lot of smart people think they’re not smart enough. They think they’re frauds, the way Margot Tenenbaum says at one point, ‘I’m not a genius. I never was a genius.'”

Greer now turns his full attention to the metal ball, moving at a ridiculous speed toward the center hole of the funnel, a planet accelerating its orbit as it draws closer to the sun.

“Come on! Come on!” Greer encourages the ball. “Yes! It’s sinking into the sun! The Earth is falling into some sort of gravity well!”

Finally, the ball drops out of sight, and Greer cheers.