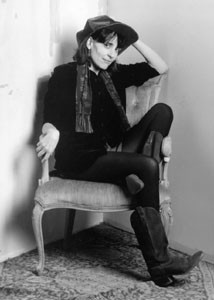 At most church services, prayer is little more than a vehicle to promote often less than inspiring dogma. On Zero Church (Red House)–a newly released collection of contemporary prayers set to music by the acclaimed folk duo the Roches–prayer is reclaimed with Shaker-like purity as an intensely personal experience.

Under the care of the Roches, the singing sister act known for its lush harmonies and quirky songs, these sometimes confessional and even painful petitions are transformed into powerful, life-affirming statements of faith.

The result is a deeply emotional album that, when heard in the context of the background stories that accompany the lyrics, can move you to tears.

This unique work sprang from a project at Harvard University’s Institute on the Arts and Civic Dialogue, founded by playwright, author, and actress Anna Deavere Smith. The institute focuses on artistic collaboration while exploring issues of race, identity, diversity, and community.

But this album is far from an academic study. The Roches–Maggie and Suzzy (joined here by sister Terre and brother David)–set to music 18 prayers by a wide range of people invited by the institute to share their thoughts and feelings about the subject.

Selections include a musical enhancement of the prayer attributed to Mother Teresa and titled “Anyway”; the moving words of a Vietnam veteran and a freed Sudanese slave; a prayer for migrant workers; and, from a woman with AIDS, blessings upon other patients and those who care for them.

The Roches were assisted by Dr. Ysaye Barnwell, a member of the acclaimed gospel group Sweet Honey in the Rock, who also contributed the track “Couldn’t Hear Nobody Pray.” But, for the most part, these are not gospel songs at all; the tracks often forego traditional song structure entirely.

Rather, these are musical meditations on the human condition, sincere pleas for spiritual guidance, or exuberant thank-you notes to some unseen higher power, all delivered with such angelic grace that you expect the singers to be raptured up to the heavens at any moment.

And they come straight from the heart. For instance, Bill Barbeau–a firefighter in Somerville, Mass., who was once recommended for a commendation while serving in the Vietnam war–contributes a heartbreaking prayer asking forgiveness for his actions in battle. “As a young man,” he writes, “I killed a lot of people for no good reason. What became no good reason. I would love to blame someone else, anyone else, for how I feel about what I did, the killing.”

Karen Bashkirew offers “Sounds,” a prayer prompted by recent incidents of gay bashing, including the 1998 murder of Matthew Shephard, the 21-year-old University of Wyoming student who was brutally beaten and left to die after being lashed to a fence. “‘Sounds’ was written in response . . . to hearing the grieving sounds of [Shephard’s] mother in a fragment of television coverage,” Bashkirew writes in the liner notes. “As a mother . . . I felt shattered by the sounds. . . . I began to imagine the place those sounds were coming from and the distant places they might go.”

“New York City” was written by Suzzy Roche, who witnessed the collapse of the World Trade Center twin towers on Sept. 11 while out walking her dog. She later performed the prayer, inspired by an Edna St. Vincent Millay poem, at a benefit for FDNY Squad One, the firehouse at Park Slope that lost 12 men (fathers to 27 children).

“When we started our search for prayers, I wasn’t sure what we were doing,” Suzzy explains in the album’s liner notes. “Now I’m beginning to understand something real about compassion, kindness, and tolerance.”

Indeed, the Roches have created a wonderful gift in these lessons of faith, hope, and endurance that can bolster the spirit in these troubled times.