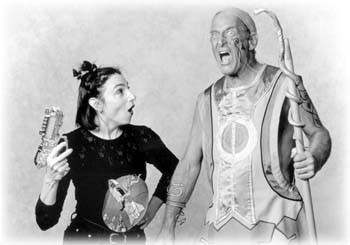 The Riot Grrrl on Mars

What a Riot: Riot Grrrl Julia Perani and King of Mars Richard Goodman square off in Berkeley Opera’s latest adaptation.

LAST YEAR, the Sonoma City Opera went flashing into the past, commissioning an original opera about the life and dreams of Bear Flag Revolt loser General Mariano Vallejo. This year, they’re doing the only natural thing: they’re going to Mars. Via Berkeley. But of course.

Actually, this is easy to figure, given Sonoma City’s long affiliation with the Berkeley Opera, a well-respected company that has brought many summer productions up north.

Never ones for the stodgy, this year they’re putting on a production eloquently entitled The Riot Grrrl on Mars. Yep, in this production, it ain’t over ’til the riot grrrl sings.

Leaping from Gioacchino Rossini’s 1813 score for the commedia dell’arte romp The Italian Girl in Algiers, Berkeley Opera librettist David Scott Marley devised an entirely different story and lyric while disdaining to alter Rossini’s music, save for the addition of a theremin.

A theremin? “It’s a ’50s electronic sound,” explains Marley by phone from his East Bay home. “Oooooooooooh,” he demonstrates. Oh, that sound.

As familiar as the theremin should be the conceit of Riot Grrrl. Taken from the rich loam of 1950s comic book lore, the story is loosely based on Rossini’s original tale of a man who is kidnapped and sold into slavery in Algeria. The Italian Girl of the title travels to that exotic land to find her loved one and restore his freedom. To modern-day audiences, Marley reports, the concept of slavery and the ridiculing of foreigners is actually “not so funny.”

But take the story out of a real-life context, add some cool-looking ray guns and brightly costumed Martians, make the title character a punk-rock singer set to rescue her musician boyfriend from a TV-addled alien king, and you’ve got yourself a comedy.

Marley’s struggle has been to take the broad archetypes of commedia dell’arte, instantly recognizable to the audience of Rossini’s day, and to give this generation of opera-goers the same sense of the absurd and the wondrous.

“What,” Marley asks rhetorically, “is the equivalent of Algeria to a modern audience? We were looking for those things that have the same significance as they would to a period audience.”

When someone suggested that being kidnapped by a UFO had that same “never-neverland quality” to it, the idea was initially pooh-poohed. But the appeal grew, and so did Marley’s perplexities. Take the Italian Girl, for example. In Rossini’s time, the coupling of those two simple words evoked an image of an independent woman with wiles. Today, Marley correctly notes, that just means “a woman who comes from Italy.”

“So,” he continues, “my challenge became to find a typical archetype of a strong woman. I spent,” he sighs, ” a couple of months on that theme alone.” And then he hit upon the riot grrrl phenom of the early ’90s, exemplified by such go-it-alone rockers as Liz Phair and righteous babe Ani DiFranco.

“Some people were concerned that since an opera audience is made up primarily of older people, they might be put off,” says Marley. “But at no point do we expect the audience to come in armed with the finer points of punk rock.”

Keeping it light is the key for this popular rendering, which has received rave reviews in the San Francisco Chronicle during its continuing run at the Julia Morgan Theater.

Marley has a pretty good grasp on why his production is wowing ’em. “I’m concerned with keeping the theatrical values high and not sacrificing them for the musical values solely.

“Opera has had a strange history in America,” he mulls. “Since it was brought over by immigrants, it seems exotic and as though it’s just for rich people. Unfortunately, that’s the best way to fund it, and in order to attract contributors, you have to make it look like something that rich people would like. All of this leads to a kind of snobbery, and that,” he says, “is a shame.”