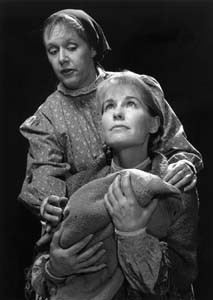 Quilters is nothing but existential bleakness.

WARNING: Pacific Alliance Stage Company’s production of Molly Newman and Barbara Damashek’s Quilters may cause drowsiness. While viewing, avoid consuming sedatives or tranquilizers. After viewing, use caution when driving a motor vehicle or operating heavy machinery. Keep out of reach of theater critics.

Directed by Wendy McGlothlin Wisely, Quilters is the hodgepodge metaphysical travelogue of matriarchal colonist Sara (Elizabeth Benedict) and her progeny. Together, they traipse across a frontier America studded with hardships and sacrifices dutifully recorded in the blocky hieroglyphs of quilt squares. Add music, stir in schmaltzy revelations, give myriad nods to tradition, and Quilters is a joyously American and imminently marketable populist romp.

Yes, quilting is a valuable part of the American cultural milieu, an art form rife with its own symbolic vocabulary and systems that have spanned generations, but a prosaic mosaic of sketches stitched together with a gossamer thin plot line does not constitute an interesting production no matter how clever an analogy it is to its namesake.

Those with a penchant for quilts, sugar-coated American history, or zealot girl-power, however, will forgive this musical’s foibles and appreciate the talents behind it–indubitably doing their best with an inadequate script.

Fresh-faced, Bambi-eyed Hollie Martin plays kid sister Dana with a charming guilelessness apropos of the Brady Bunch’s pigtailed munchkin Cindy. In the course of one act, Dana–who eventually freezes to death–cradles an afflicted-looking cornhusk doll, pleads God to throw the on-switch for her menstruation, and dresses like Shirley Temple whenever “talent scout” is uttered (her tedious character arc warrants this last, trifling embellishment).

Martin’s ability to stave off a self-indemnifying smile while playing the naive Dana betokens a poker face carved from stone, and though she makes a noble attempt to inflate the flat role, her obvious talents only cram in its singular dimension.

The part of elder sister Lisa, admirably endured by Donna Turner, is also an uninspired wax dummy in the shape of a pioneer woman. Turner is one of the lucky ones, however, as she is allowed to drop the hayseed persona during her character’s brief tenure as an officious schoolmarm (throughout the production, the players speak in the grating, rough-hewn dialect of the pioneer era as though they used the Webster’s to jack the wagon ’cause the wheel was broke).

Benedict, Cindy Brillhart-True, Leslie Cook, Susan Lamb, and Kristen Greer also turn in performances that swell against the suture of their characters’ shoddy stitching. They sing and harmonize well and undoubtedly benefit from Wisely’s direction talents– but the show, as written, squanders their abilities.

Set designer Jeremy Hamm and light designer John Kelly forge a play area that so epitomizes existential bleakness that, were The Wasteland scribe T. S. Eliot to see it, he would chuck his Nobel Prize in the furnace from shame. Dominated by a barren, sparsely lit, gray backdrop with a low, jagged horizon line done up in fiery hues, Hamm’s set deftly underscores the alienation early settlers must have felt in America’s virgin terrain.

The wanderlust of Quilters’ characters may prove contagious by the close of the second act such that audience members may pioneer into the parking lot and go westward home.