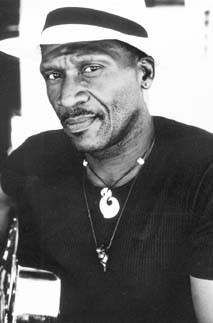 IN 1971, John Fahey released the single LP America that many consider a masterpiece–a classic example of solo acoustic guitar from the man who defined the instrumental folk genre. Unfortunately, only about half of the original work made it onto vinyl because someone convinced the guitarist that a double album wouldn’t sell. Now. thanks to the ability of digital technology to squeeze lots of info onto a single shiny CD, Fahey fans for the first time get to hear this landmark work in its entirety (actually, two minutes were cut since current CDs can hold only about 79 minutes of music).

The reissue is rapturous in its beauty–a majestic, spacious work as grand in its deceptive simplicity as the early American landscape from which it draws inspiration. This new version features nine additional songs that were meant to make up the first LP of the ill-fated two-record set, including inventive recastings of American hymns, gospel, and folk songs; a cover of country blues legend Skip James’ “Special Rider Blues”; a breathtaking arrangement of the third movement from Dvorak’s Eighth Symphony; and the lost masterworks “America” (thought to be the only recording of Fahey playing a 12-string guitar) and the 11-minute mini-opus “Dalhart, Texas, 1967.”

Considering that this brilliant Maryland guitarist rarely records or performs anymore–beset by a deep depression and inner demons–and is seldom able to attain the same level of virtuosity when he does, this release is all the more welcome.
Greg Cahill

Fastball
All The Pain Money Can Buy
(Hollywood)

THE LEAD SONG and modern-rock radio hit “The Way” begins with the static sounds of a radio straining to lock onto a weak broadcast signal while the opening verse unfolds. By the second verse, the band kicks in as you’re transported to rock-radio heaven on this Tex-Mex-styled tale of an older couple who set out in an RV for a family reunion, but never make it. And so it goes throughout this young Texas trio’s sophomore album of quirky, guitar-fueled songs, which achieve both a classic rock and a thoroughly modern vibe at once. With nary a dud among the 13 tunes, influences leap out of the shadows, from Beatle-ish (“Got to Get You into My Life”) horns and Byrdsian guitars to Who-like drum flourishes and alternative legend Big Star-tinged harmonies. A cinch for cruising those upcoming hot summer days and nights.
TERRY HANSEN

SINGER MAX Cavalera may have quit his job as frontman for the champion heavy-metal band Sepultura, but he hasn’t strayed far from their path. His last solo project, Nailbomb, was daring and sample-oriented, but the eponymous debut disc from his new group Soulfly sometimes sounds like a carbon copy of Sepultura’s landmark 1996 disc Roots. That’s good news for fans of that band’s growling, snappy ferocity, as Soulfly echo Sepultura’s embrace of the crisp rhythms and deep tones of their native Brazil. But Cavalera almost misses the very thing that makes Sepultura’s minimalisn work: an undeniable and urgent sense of purpose. Hip-hoppers might say that he is keeping it real, just as rockers say his song remains the same.
KARL BYRN

OVER THE YEARS, singer and songwriter Taj Mahal has gone from blues purist to pop idol to blues purist to… . well, the name of his current outfit says it all. This adventurous tunesmith–and former Hawaii resident–has hitched a ride with veteran members of the International Messengers Band, laying down gentle island rhythms, reggae covers, calypso/blues hybrids, and some of the most scintillating after-hours jazz I’ve heard in ages. Occasionally Taj overreaches on this potpourri of sound–ironically, the album’s only straight-ahead Hawaiian number is a bit of clunker–but name another modern bluesman with his sense of exploration or downright funkiness.
G.C.