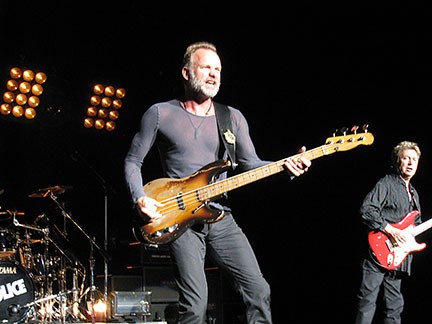 If someone were to emerge from a coma after 25 years under, they may have thought no time had passed considering the lineup at Concord’s Sleep Train Pavilion on Wednesday night. That is if they ignored the grey hair (or disappearance of hair) and the relative pudginess of The Police and Elvis Costello. Surprisingly, both veteran acts provided an effective time warp to the age of New Wave, bringing renewed energy to their respective classics.

Starting a few minutes early, Elvis Costello& the Imposters (comprised of 2/3 of the Attractions, his most celebrated backing band) began with the amphitheatre only half full. But the band was as tight as ever and made the crowd grow fairly quick with a slick set mostly comprised of populous favorites and tracks off Momofuku, his excellent new record. “And I don’t mean that small Frisbee thing,” Costello proudly said of his initially vinyl-only release. “I’m talking about a big piece of plastic.”

The up-tempo numbers went over well, especially “American Gangster Time” (which featured an incendiary organ solo by expert keyboardist/knob-fiddler Steve Nieve) and opener “Stella Hurt,” which seems largely influenced by Costello’s regular live cover of the Beatles’ “Hey Bulldog” from last year. But with such a short set (barely an hour), Costello spent too much time on extended outros, stretching out “Turpentine” and the clap-along “Clown Strike” beyond their inherent charm.

People naturally responded better to the hits, especially a faithful rendition of “Everyday I Write the Book” and a looser, more abrasive version of “Watching the Detectives,” which made scattered groups actually stand up and dance (It also whet our appetite for The Police’s reggae-inflected tunes). Of course everyone got up and went apeshit when a bearded, grizzled Sting strolled out during “Alison,” which seemed tailor-made for his whispery, near-jazzy vocal style. Costello kept the momentum going with high-energy closer “Peace, Love and Understanding.”

I was convinced that Elvis Costello’s set would be the climax, not only because he and his band have been on fire this decade, but also because the Police were simply god-awful when I saw them last June at Oakland’s McAfee Coliseum. Only a few dates into their tour, in a gi-normous stadium best suited for a much louder catalogue of music, the power trio seemed sluggish and out of sync with each other and the audience (to whom Sting barely said shit). Compounding the problem were the Sting-ified song arrangements, showing the band to be completely oblivious that people who loved the Police may actually loathe Sting’s more subdued solo output. I know I do.

Expectations were low for the Police, but what a difference a year (and probably reading reviews of their shows) made. Right from the opener “Message In A Bottle”, they exploded with energy all around the stage. Sting was as exuberant as his ever-youthful physique was, as were Andy Summers and Stewart Copeland, who all went to town on the recently resurrected “Demolition Man”. They finally seem relaxed onstage again, with Sting serenading Copeland for his birthday, bigging up Northern California, and engaging in call-and-response throughout the night, which made the mediocre “Hole In My Life” a highlight of the show. The Sleep Train Pavilion also helped by being the ideal size for such a show: not too big that the lawn dwellers feel completely removed and not too small that the promoters & band think it unworthy of playing.

In general, the songs were tighter, slightly faster than last year, and (thank God!) angular once again, with the signature Police twitch back in full force, making main set closer “Can’t Stand Losing You” pulse with ska magnificence. This made the Specials’ “Ghost Town” video that played in between sets seem less ridiculous. “Driven to Tears” was funky once again and “De Do Do Do, De Da Da Da” jangled, while “When the World is Running Down” rocked in a way not heard since…the recording! And thankfully, Sting didn’t avoid the high notes as much. Too bad they didn’t play “Synchronicity II” this time around.

Their performance was so good, in fact, that I didn’t mind when they butchered “Roxanne” again with an extended quiet-storm middle section and unnecessary recorded backing vocals. Ironically, some of the biggest hits were not the most well-received, with “Don’t Stand So Close to Me” also suffering from a watered-down arrangement. The formerly ornate “Wrapped Around Your Finger” fared better, though, with Copeland’s astounding rhythmic talents on display as he wielded the xylophones and various cymbals n’ shit in a sparser rendition. And with a new, bouncy guitar lick courtesy of Summers, “Every Little Thing She Does is Magic” sounded gorgeous even without the piano.

While the ticket prices were still exorbitant for a simple light show and video setup, and the Police’s set was criminally brief, concertgoers got a high-quality performance this time around. The Police’s enthusiasm and commitment to the material actually DESERVED the thousands singing each word of these now-classic rock gems. The Police tour has officially evolved from the most anticipated to the most improved.—Photos & review by David Sason

Message in a Bottle

Walking on the Moon

Voices in My Head

When the World Is Running Down, You Make the Best of What’s Still Around

Don’t Stand So Close to Me

Hole in My Life

Every Little Thing She Does Is Magic

Wrapped Around Your Finger

Every Breath You Take

Either Side Of The Same Town

Everyday I Write The Book