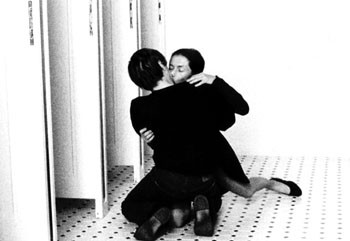 Hot For Teacher: Benoît Magimel and Isabelle Huppert test out the linoleum.

Isabelle Huppert goes cruising for a bruising in ‘The Piano Teacher’

TThe praise heaped upon Cannes Grand Jury Prize-winner The Piano Teacher is deserved, at least to some extent. As Erika, a spectacularly repressed professor of music, Isabelle Huppert shines in the driest kind of comedy–the kind that in moments can suddenly reverse, become poignant. Watched around the clock, her Erika is as mother-smothered as Norman Bates. Both mother (Annie Girardot) and daughter sleep side by side in a small flat; both are expatriates from France, living off the money Erika makes teaching at the Vienna Conservatory.

Unlike most who sacrifice all for music, Erika manifests no pleasure from it–apart from an almost imperceptible flaring of her nostrils. Sometimes the eyes in that Novocained face liquefy. She might flick out her tongue as if probing a cold sore. The muscles at the corner of the mouth twitch in the ghost of a ghost of a smile, so subtle a spectrograph might miss it.

The film is directed by Michael Haneke, whose home-invasion film Funny Games had some local success. Here, he really goes after classical music. Generally, films drink in passion for the classics, though there might be an occasional madman or woman–say, David Helfgott in Shine–driven nuts by the piano keyboard. But Haneke proposes a whole class of teachers at the Conservatory whose blood is so frozen they can’t even register the madness of Erika.

Erika’s the worst-case scenario of a teacher. Her real pleasure lies not in hearing a perfect version of some Schubert piece but in bending the fingers of children to a brutal task, as in the repeated shots of hands cruelly splayed and paused over piano keys. It’s the world of classical music as if seen by a deaf person. All the camera really cares about is the unpleasant contortions of the musicians until S&M becomes the metaphor for the creative discipline of a musician studying.

Walter, a good-looking, young romantic (Benoît Magimel) applies for lessons under this forbidding professor. Since he doesn’t fear her, something in her attitude changes, and she decides that he’s the one who could open the secret masochistic rites lurking in her locked-up heart.

Waiting for Erika to blow a gasket is all there is to The Piano Teacher. Just as in a horror movie, you’re assured that the snooty, picked-on intellectual is going to be the one who gets the gun (in this case, a knife). While The Piano Teacher might be dark comedy for those with a hard enough heart, it’s nigh impossible to take the film seriously. Yes, there’s kinky eroticism and devilish humor in the scene where Erika hands over to Walter a densely worded shopping list of unnatural acts. However, The Piano Teacher‘s Grand Jury Prize at Cannes probably wasn’t for comedy.

An art-house audience that found itself liquefied by Bjork’s Little Match Girl performance in Dancer in the Dark may be devastated by this dated movie that’s ultimately the plight of a woman who didn’t agree on a “safe word” before starting up an act of S&M. (During moments like the one with the razor blade, the audience may wish they had a safe word of their own to shout at the screen.) But is it really possible to be as ignorant of the fundaments of S&M today as it might have been in 1983, when the movie’s source novel by Elfriede Jelinek was written? You can’t tell me that a woman as good looking as Isabelle Huppert couldn’t find someone to mistreat her in a city as large and sophisticated as Vienna. Ultimately, Huppert’s vividness, her essential amusement at the part, breaks out of this coffin Haneke tries to construct for Erika.

The Piano Teacher plays at the Rafael Film Center starting Friday, May 3.