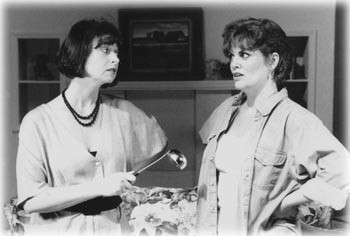 IN 1952, AMERICAN George Jorgensen underwent the world’s first gender-reassignment operation in Denmark, and returned home as Christine Jorgensen. In 1986, with only some minor cuts and reconstruction, playwright Neil Simon successfully reassigned the genders in his famed cohabitation comedy The Odd Couple.

Under the able direction of Gene Abravaya, the Players embark full steam with the retread Freudian case study (nowhere else in dramatic literature have the anal-retentive and -expulsive traits been so illustratively presented) and arrive with a perceptive production about two women who need to be needed.

Like the original Odd Couple, two pals decide to share the shingles after both their spousal ventures have disintegrated. For Florence (Rebecka Pinkham), divorce precipitates homelessness. Post-marriage Olive (Erin Cooney) feels landlocked in lonesomeness and invites Florence to live with her. The two ink a contract of comic codependence and deceive themselves that theirs is a symbiotic relationship: Olive makes messes and Florence cleans them up–they have a purpose. Sure.

Director Abravaya has assembled an excitable, punchy cast that meets Simon’s pithy, though partially antiquated, script (“Fresca, anyone?”) with levity, ease, and limited schmaltz (Simon’s sweet tooth nips most aspects of his oeuvre, but Abravaya smartly underplays the sentimentalism).

Erin Cooney’s Olive is a rumpled, dowdy television news producer, more bawdy than butch, with much of her male predecessor’s braggadocio intact. Olive guffaws, curses, rolls up her shirt sleeves, and litters the apartment like a pug dog clawing newspaper.

Likewise, willowy Pinkham draws Florence as a comic miasma of housewifery and neuroses (Martha Stewart on the dark side of the Force) while admirably sustaining the character arc of the show. Pinkham renders her character’s revelations with an air of credulity despite the work’s unabashedly giddy nature.

On hand for succor and support are the duo’s crew of loyal chums, including policewoman Mickey (wryly performed by Naomi Sample, who makes an art of emotional exasperation) and daffy, well-meaning Vera (a scene-stealing Jennifer Hedgepeth). Jodie Linn and Margaret Lash also turn in fine performances as women-on-the-verge.

Scenic artist Shawn Lux has superbly designed Olive’s apartment, replete with an actual toilet peeking from behind a bathroom door. An expressionistic projection of a metropolitan skyline above the stage counterpoints an otherwise realistic apartment set strewn with the detritus of slovenly living.

The Santa Rosa Players’ production of The Odd Couple is more than “ladies’ night” at the theater–it is real entertainment.