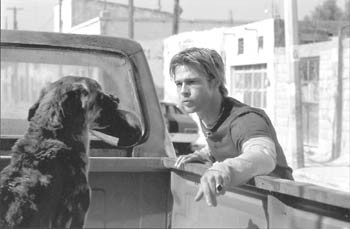 IN THE MOVIES, Mexico often serves as a testing ground, a place where the gringo can hazard his manhood in a dangerous country against wily, ruthless, unwashed, gibbering sadists–a land where even God’s good water can’t be trusted. The Mexican spares us not one of these stereotypes.

Directed by Gore Verbinski (auteur of Mouse Hunt) in the northern deserts, the film tells the story of a pistol called “The Mexican” that falls in and out of the hands of an inept petty hood named Jerry (Brad Pitt). Since he owes a favor to a crime boss (miscast Bob Balaban), Jerry must go to a small town south of the border to pick up the gun.

Unfortunately, he foolishly leaves the pistol in his car, which is promptly stolen, etc., etc. Meanwhile, Jerry’s angry girlfriend, Samantha (Julia Roberts), whose mind is a mulch of pop-psychology advice books about men who can’t love, has left him to go to live in Las Vegas. Since it’s thought that Jerry ran off with the pistol, the crime boss sends a thuggish kidnapper named Leroy (James Gandolfini, better known as crime boss Tony Soprano on HBO), after Samantha.

The script is by actor J. H. Wyman, who wrote and directed a previous movie titled Pale Saints, which has the same elements of people captive in car trunks, vague poetic dreams of relocating to someplace sunny and magical and small-time hoods with sunglasses. The point of this new potboiler is that lovers have to be put in peril to realize the importance of commitment. There’s something especially irritating about films that try to overcome their cheap-jack fatalism with equally cheap romance. Even Gandolfini can’t really sell a speech in which he says he’s learned the importance of love from the people he’s had to whack along the way. The way Verbinski lingers over the scenes, he thinks he’s found another dimension in Gandolfini. Not hardly–this major actor has been exploring the soulful side of a parasitic killer in one brilliant episode of The Sopranos after another.

Pitt and Roberts have never been able to transcend poor direction, and here they have Gore Verbinski. The impression The Mexican leaves is of one scene at the end where the two leads are sitting side by side on a couch in a hotel lobby, waiting for a phone call–oh, those undependable Mexican phones.

The question is whether Pitt and Roberts have reached the level of stardom where even watching them sitting doing nothing is fascinating. As in Hannibal, the stars don’t connect until the last half hour; and there’s too much connivance to keep them apart as Pitt negotiates the bad Mexican hombres, bad Mexican roads, bad Mexican junkyard dogs, and all the other bad jokes in one botch of a film.

Not So Great, Then?