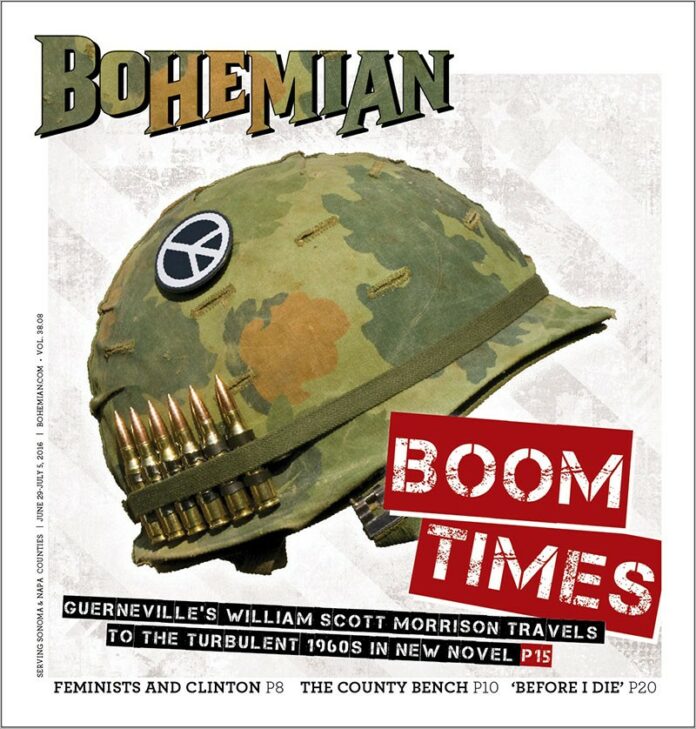 William Scott Morrison’s novel Luck of the Draw was more than 20 years in the making. Morrison, 68, has lived in Sonoma County since 1975, and has created a highly personal work of historical fiction that runs from 1959 to 1973—essentially the 1960s and the years before and after.

The character McGill is a better version of himself, Morrison says. “He is me if I was really cool.”

The central element of the book is the Vietnam War. The book’s title is taken from the lottery system used to induct draftees into the war.

There is no shortage of books on Vietnam and the ’60s, but Scott says his objective in the book was to make sure the main lesson of the war isn’t forgotten: avoid foreign conflicts that don’t serve our national interest

“I wanted to get the truth out about Vietnam as I saw it,” Morrison says. “My goal was to get that into the public consciousness, at least a little bit.”

In this scene, a group of fraternity brothers gather around the TV to see who gets an unlucky number and goes to Vietnam.
—Stett Holbrook

Before the drawing, the Pentagon had been publicizing the Army’s anticipated manpower needs for the coming year, so everybody knew what to expect. The official estimate was that the lucky males in the highest third, from about #240 to #366, were relatively safe and could get on with their lives; those in the middle third, from “about” #125 to #240, were in a sort of limbo and would “probably” not be drafted; and all healthy males in the lowest third who had no deferment were goners. The new system was good for freshmen like Dawkins. If he kept a “gentleman’s C” for the next year, he would be off the hook and not have to worry about the draft unless things got so bad that Viet Cong war canoes came paddling up the Ohio River.

When Nixon’s big show began, the carpet in front of the TV was packed tight with guys sitting on the rug, beers in hand, like at a rock concert. The crowd behind the horseshoe of couches and chairs stood four and five deep, with guys in back standing up on radiators and tables and chairs brought in from the dining room to get a view of the tube.

The soothing voice of Walter Cronkite, America’s most trusted TV newsman, explained how the drawing would work. The camera focused on a clear, cylindrical jar, about three feet high, the same exact one used in the draft lotteries of 1917 and 1940. At the bottom of the jar were 366 blue plastic capsules, about an inch long, each containing a piece of paper with a different day of the year on it. Cronkite held up a sample, and somebody in back yelled, “What’s it look like?”

“Like a fucking horse pill,” came an answer from the front.

The capsules would be picked at random, and the order in which your birthday came up was your very own draft number. Unlike most lotteries, the sooner your number came up, the bigger you lost.

When Nixon’s face appeared on the screen the house rocked to a cacophony of hisses and boos and shouts of “Asshole!” and “Motherfucker!” Just then McGill saw Rotsee Ross come in, carrying his white saucer hat in one hand and brushing snow off the shoulders of his navy blue ROTC overcoat with the other. He grabbed a chair from the dining room and climbed up to be able to see the TV over the crowd in front. When he saw Nixon, he began shaking his white saucer hat at the TV and yelling “Motherfucker” louder than anybody.

The lottery began when a dour Republican congressman nobody had ever heard of stepped up to the jar to pick the first number. The banter stopped, and the house became eerily silent. It must have been like that all across America, as millions of guys and their girlfriends and families gulped and held their collective breaths. The congressman seemed to be enjoying himself as he bent over and shoved his arm into the three-foot-deep jar, right up to his shoulder, to get his hand all the way to the bottom. He fished around for a few seconds, then pulled out a capsule and handed it to an official seated at a table. The official opened the capsule, removed the paper, read it, showed it to other officials sitting around and said, “September 14th.”

“September 14th,” Cronkite repeated in his most stentorian, anchorman tone. “September fourteenth is number one.”

Everybody looked around to see who would claim the first-place money, but no one did. Rhinebecker checked the calendar in case the winner wasn’t present, shook his head and said, “Nobody’s got it.”

A Little Sister wrote “1” next to 14 on the September poster with a marker and put a line through the space where a name would have gone.

After the first pick, instead of an official doing the picking, the remaining numbers were chosen by 365 young men of draft age from every state in the union who had been flown in to do the dirty work. A tall, cheery-faced boy with thick Buddy Holly glasses jumped up and stuck his arm in the jar, picked a capsule, and handed it to the official who announced, “April 24th,” followed by Cronkite who intoned, “Number two is April 24th.”

Rhinebecker checked his calendar. “Nobody’s got it.”

A Little Sister with a black marker wrote “2” next to 24 on the April poster, and another Little Sister used a pink marker to write in the name of the girl who didn’t count.

On the third pull the official said, “December 30th—”

A plaintive “NOOO!” wailed out, and up from a couch jumped Baker, a ladies’ man who always seemed to have a different girl on his arm, just about the last guy you’d expect to see carrying a rifle. Like McGill, Baker was a senior and out of options. He hopped around, shaking his head, tugging at his blonde, Beatlesque hair and screaming, “NOOO! FUCKING NOOOOO!”

The brotherhood offered him its sincerest condolences.

“Your ass is grass, Baker!”

A Little Sister using a red marker put a “3” next to 30 on the December poster, wrote in Baker’s name, drew a fat circle around it and put a big red star next to it.

Rhinebecker took out a 10 and a five to cover the second and third place “winners” and handed Baker the cigar box stuffed with cash. “Congratulations, Brother Baker, sir!”

Baker opened the lid, peered in, then shaking his head in disbelief, slumped down in his seat on the couch and made a goofy show out of counting his winnings, one bill at a time, but his wide-eyed, shit-eating grin betrayed his utter despair.

With the big money out of the way, everybody relaxed, and the race was on for second. For a while it seemed nobody would take it until the official said, “September 26th—”

It was a freshman pledge, Sharrock. “Pledge Sharrock takes second,” Rhinebecker announced, and handed him the $10 prize. McGill thought it unfair for a freshman to be in the money, since if he kept a 2.0 average for a year he would be safe unless Nixon changed the rules again.

It was Zovis, a junior whose GPA hovered dangerously close to 2.0, putting him at high risk if he got less than a “C” in any course. Already overweight from his job as a fry cook at the Char-Pit, he often joked about eating his way into a medical out. He wasted no time, taking his $5 prize and yelling, “Sharrock, call Marino’s for a large pepperoni with mushrooms and extra cheese.”

Next up was fourth place, just out of the prize money, the biggest loser of all—the douchebag of the day. A few numbers went by and the official said, “March 17th,” followed by Cronkite intoning, “Saint Patrick’s Day is number 33.”

McGill was standing in the back, a cigarette in one hand, a beer in the other, totally dazed, an empty chill already sweeping through him as Rhinebecker yelled, “That’s Brother McGill!” and everybody rubbed it in, hooting, “DOOOOSSHH! DOOOOSSHH! DOOOOSSHH!”