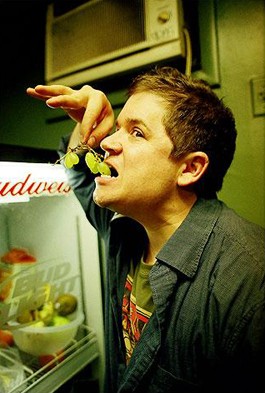 How disgusting is this? KFC's 'dog bowl' gets a vegan makeover

In a bit that has become his trademark, comedian Patton Oswalt described KFC’s bestselling Famous Bowl as “a failure pile in a sadness bowl.” Oswalt clearly has an axe to grind with KFC’s culinary delight, as he recently followed up his rant with a hatchet piece for the Onion AV Club in which he declared, “It’s goddamn horrible, this Famous Bowl.”

I’m unclear when we began receiving gastronomical insight from someone whose claim to fame is a role in The King of Queens, a perennial favorite among people stuck at the laundromat. Regardless, Oswalt has correctly done much to erode the Famous Bowl’s standing in the popular imagination.

Yet for those unlike Oswalt, for that rare breed who enjoy a heightened appreciation of comestibles, the Famous Bowl is junk-food nirvana, an incomparable mélange of so many forms of savory goodness that its succulence seems granted from above.

Admittedly, this is a bowl filled to the brim with fried chicken, mashed potatoes, gravy and corn and topped with a layer of cheese. It clocks in at 870 calories and some 40 grams of fat; its sodium count is at the max for a person’s entire day. Needless to say, my doctor would not endorse the Famous Bowl, and my wife certainly does not.

Not unlike the fried meat-and-cheese abominations that morbidly obese middle-aged white men mow down at the Costco food court, the Famous Bowl is a study in the abject cynicism of the fast-food industry, and places KFC’s corporate owners (the coquettishly named Yum! Foods) one rung lower in hell than the gentlemen at R.J. Reynolds. God may not play dice with the universe, but fast-food company executives don’t hesitate to gamble with their customers’ arteries.

Despite all this, like deep-fried Twinkies and Canadian Club whiskey, the Famous Bowl is a transcendent abomination.

When my vegan wife and I met, she was understandably horrified by my enthusiasm for such food. I continued to eat this way for two years, largely unfazed by her entreaties. After dating vegetarians and vegans nearly exclusively while playing in a band with a vegan whose dietary intake was restricted to toast with nutritional yeast and 40s of Mickey’s, being around non-meat-eaters was a more common experience than the contrary. Why should I change?

But in the past year, I have chosen to give up meat due to my general disgust with the practices and politics of the meat industry, and the troubling implications of bioengineering. It’s a personal ethical choice I choose to make. In short, I’m not here to argue these points; I don’t give a shit what you choose to eat, and I don’t begrudge anyone his cheeseburger.

No, this is the point I am here to express: Giving up meat need not be an exercise in self-flagellation, even though many vegetarians and vegans seem to think it does. To wit, here is a sample vegan dinner from Dr. Joel Fuhrman’s veggie bible Eat to Live: salad with lemon and shredded pear; steamed Swiss chard and zucchini; and something called Acorn Squash Supreme.

I say to Dr. Fuhrman: Nay! We shall enjoy our crap food whether we are omnivores, vegetarians, vegans or even detestable freegans/trust-fund-bums.

To this end, in recent months I’ve used the kitchen as a laboratory to turn out some of the most unhealthy vegan culinary delights known to man. And while I haven’t yet found suitable equivalents for some of my favorite foods from my omnivore days (pork ‘n’ beans may be, by definition, un-veganizable), I chose to turn my studies to the creation of a junk hound’s culinary holy grail: a veganized Famous Bowl. With my better vegan half out of town last weekend, I devoted myself to obtaining this quarry. In honor of vegans’ inexplicable fondness for cutesy wordplay, it is of course called the “Infamous Bowl.”

For this process, I had to consider the many sumptuous flavors that the Famous Bowl brings together, and how to replace each. The Original Famous Bowl has mashed potatoes, fried chicken pieces, shredded cheese, indefinable brown gravy and sweet corn. The Infamous Bowl, therefore, must contain mashed potatoes with soy and Earth Balance, faux chicken parts, soy cheese, vegan gravy and actual corn.

This isn’t a recipe per se; generally, I just cook by what feels like the right amount, allowing common sense to prevail. So instead of a traditional recipe, allow me to offer a general guide.

First, cut and boil four small red potatoes for mashing (using liberal amounts of soy milk, salt and butter substitute). While the potatoes are boiling, heat up some premade vegan gravy of choice or whip some up from your favorite recipe (if in doubt, use my personal recipe book, Google, to search “vegan gravy”—you’ll find great options within the first five results). After the gravy’s ready, it’s time to grill your fried chicken substitute; with cut garlic, a dollop of olive oil and same fake chicken and you’re in business. Brown to satisfaction. Next, microwave half a cup of frozen or canned corn, shred some soy cheese, and preparations are done.

Now it’s time to assemble. Scoop the mashed potatoes into a bowl, add the corn and cover lovingly with the faux fried chicken. Ladle a heaping amount of gravy, cover with a generous helping of grated soy cheese, and culinary delight is at hand. Set up a place setting, pick a beverage (I recommend a stout beer or, even better, Pabst Blue Ribbon), and, baby, it’s time to eat!

The verdict? Decent. Full of the starchy substance absent in many herbivore diets, yet certainly missing a certain je ne sais quoi. The mistake I made was going with the cheap Trader Joe’s faux-chicken strips instead of a true fried-chicken substitute such as Chick Patties. Or perhaps it’s the lack of the mysterious chemicals that keep KFC’s gravy gelid and lumpless all day long.

Nonetheless, it was an auspicious first venture into a brave new world of junk-food vegan dining, one on which I entreat both omnivores and herbivores to join me.

Paul M. Davis is an editor at www.isgreaterthan.net.