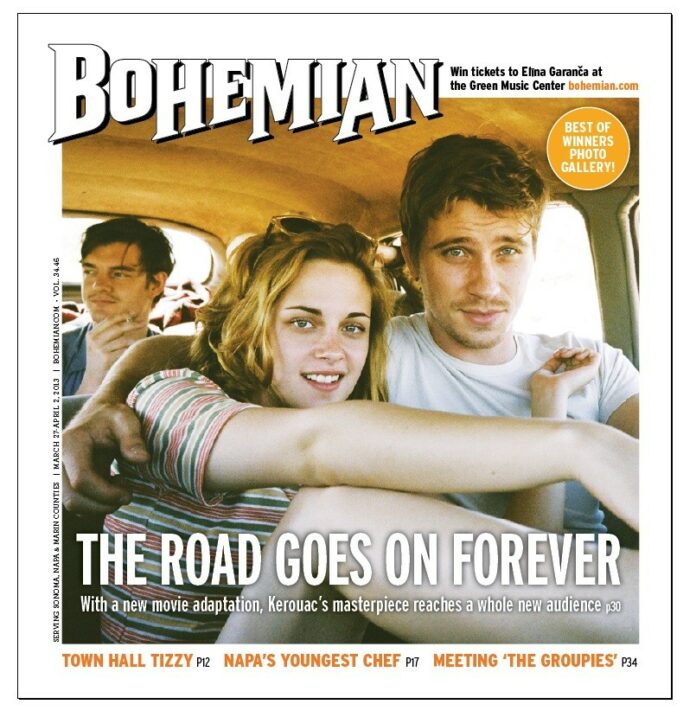 'On the Road' finally makes it to the big screen

The one and only time I met Allen Ginsberg, I wasted the moment talking about the 1991 movie of William Burroughs’ Naked Lunch. Ginsberg started the conversation, though, by asking me what I thought of David Cronenberg’s work. I said I thought it was expurgated. Ginsberg responded in about these many words: “The movie didn’t ruin the book. The book’s still on the shelf. Next customer!”

So Walter Salles’ long-delayed film version of Jack Kerouac’s famed novel On the Road cannot ruin the book, at least by the standards of Ginsberg, who is portrayed in its pages as Carlo Marx (played by Tom Sturridge). Produced by Napa’s own Francis Ford Coppola, this film version has been 50 years in the making, not counting some re-editing and time on the shelf after its debut in May 2012 at the Cannes Film Festival.

It’s been a long road. Right after the novel’s 1957 publication, Kerouac claimed to friends that Marlon Brando was interested. Brando’s people passed, however. Years later, Gus Van Sant was interested—a seeming natural to direct the adaptation, particularly in light of My Own Private Idaho.

Rumors blue-skyed Johnny Depp as the Kerouac figure, Sal Paradise, with Brad Pitt as Kerouac’s solar deity/car thief Dean Moriarty, based on legendary local Monte Sereno character and live wire Neal Cassady. Billy Crudup and Colin Farrell were also proposed as Sal and Dean. Garrett Hedlund, who eventually got the role of Dean, told me that a version with Paul Newman—at about the time Newman starred in Hud—would have been the one he wanted to see.

Director Salles previously made the Great (South) American road movie, The Motorcycle Diaries, clearly influenced by the Kerouac frame of mind. Making On the Road, this seemingly unmakable movie, Salles spent many years and what he claims were 60,000 miles finding the kinds of locations Cassady and Kerouac would have seen from their car windows in the late 1940s.

The filmmakers borrowed and rented cars from collectors of the since-vanished Hudson. The California desert town of Twentynine Palms doubled for Silicon Valley’s Campbell, where Kerouac once did a stint of manual labor loading boxcars back when the region was devoted to orchards instead of chips.

At long last, On the Road—linked with Twain and Whitman as quintessential Yankee literature—has been achieved with an Argentine director, a Puerto Rican–born script writer named José Rivera and a British actor as Sal Paradise (Sam Riley, star of the Ian Curtis biopic Control).

As Moriarty, Minnesota’s Hedlund excels in depicting radiating sexuality and lightninglike motion; he’s introduced in a balletic slamming of cars into the tight spaces of a New York City valet parking lot.

Sometimes, the other characters carry baggage from previous acting work. Kirsten Dunst’s Camille is based on Carolyn Cassady, a former local who has been trying for decades to set the record straight about her years with Kerouac and Cassady. Camille is introduced by Carlo as “Helen of Troy with a fucking brain.” A description like that is hard to live up to, and Dunst must also compete with memories of Sissy Spacek in the 1980 film Heart Beat, with Nick Nolte as Neal and John Heard as Jack.

Kristen Stewart, who filmed this between her two last Twilight movies, is maybe not as naive and sad as the real life LuAnne Henderson, known to posterity as MaryLou, the barely legal Mrs. Moriarty. Decadence is a good look for Stewart—the darker the circles under her eyes, the better she delivers.

Sturridge successfully avoids Jiminy Cricketism as Carlo. He’s a mentor, not a sidekick—the symbol of not just the beatitudes but also the hard work Sal Paradise is going to need to do to become a writer.

The movie won’t please everyone, but it’s made with freshness and unpretentiousness by a director who blends in autobiographical material with the fiction.

Salles deals with perhaps the number one problem with making a movie of On the Road: that is, Sal Paradise’s tendency to adore Dean Moriarty, who, as his fictional name suggests, is both a teacher and a criminal.

The sheltered writer learns from proscribed people—from homosexuals, drug addicts, jazz musicians. Since the film is more intense about Moriarty’s own exploits (including a little hustling with a moist-eyed trick played by Steve Buscemi), the movie is ultimately more broadening and frank, believe it or not, than the book.

No need to revise the standard view of Kerouac as a tragic figure, to ignore the surfeit of drink that diluted a writer’s talent. Whether he liked it or not, Kerouac was the front man for the “Beat Generation”—a marketer’s wet dream of pointy beards, berets and septic (and overpriced) coffeehouses.

Less well-known than the famous thirst is Kerouac’s achievement at being an ESL writer, as he was French-speaking until deep into his childhood Happily, the film emphasizes the serious prose apprenticeship, the love for Thomas Wolfe and Marcel Proust, which proceeded Kerouac’s scatting and bopping in print.

Kerouac’s grim side was worsened by the idea that “the wrong son died,” as the running joke in the movie Walk Hard had it. He was haunted by his brother’s death at an early age. He was a born-again Buddhist who never shook the old-school Catholic worship of (in his words) “little lamby Jesus.”

He dwelt in the shadow of his bigoted French-Canadian mother, a woman as tough as the army boots she used to make in the factory. Kerouac was a football player who dropped out, a macho with a taste for bisexual experimentation.

He was above all, a sufferer of the typical malaise of Depression-era kids who went into the arts: the inner terror that he was, despite all the admiration and all the love, at bottom, a bum. The movie mentions Paradise’s father scorning him on his deathbed for having uncalloused hands.

On The Road covers a small period in the late 1940s when Kerouac crisscrossed the United States by thumb, or more often by bus, or drive-away rental: New York/Bay Area/Mexico City via Denver and New Orleans. These were the freest years in Kerouac’s life, before mad fame, the final crash and the sodden last decade in Florida.

Via phone, Salles says, “You know, this was ultimately an eight-year search. We interviewed the persons who inspired the characters in the book in San Jose and Los Gatos, [including] several members of the Neal Cassady family. And we met with Al Hinkle, who is Ed Dunkel in the book.

“This in-depth research process allowed us to understand the complexity, the social and cultural background of the book. The late 1940s and early 1950s were very hard times to live. A generation was seeking to redefine their future. The book is at once an ode to freedom, an ode to youth, and an ode to literature.”

From the start, this version of On the Road added biographical behavior to Kerouac’s fictional surrogates, Salles says.

“Yes—we were so informed of the real stories that we were able to somehow improvise their logic. The book is so rich and polyphonic that you can actually select the leitmotifs.

“This is a narrative about the transitional years from youth to adulthood. You also have to face pain, and we wanted that to be part of the film.”

Before the filming, Hedlund came to the South Bay to talk to some of the survivors who remember the real men and women behind the fictional alter egos.

It was “a wonderful experience,” says the 28-year-old actor. First in Montreal, which doubled for post-war New York City, Hedlund went through what he described as “Beatnik Boot Camp,” reading and listening to tapes of LuAnne Henderson and Jack and Neal Cassady.

“Then I flew to San Francisco,” he continues. “While I was here, I also got over to Berkeley to meet Michael McClure—that was incredible. I met with John Cassady [Neal’s son, who lives in the Santa Cruz Mountains] and heard a lot of anecdotes. I realized how the Cassady family wanted their father perceived, how great a father he was and how much his family loved him.”

When I interviewed John Cassady last year in connection with the documentary The Magic Bus, I was surprised at his enthusiasm. Commonly, the children of bohemian types grind an axe about how they suffered from the absenteeism and the bad behavior.

Cassady said, “Are you kidding? My upbringing was the complete opposite. I had an idyllic existence. I felt like a rock star—my father was not famous, he was infamous. I loved the attention. To this day, it’s like, don’t get me started.”

“That’s what he told me, too,” Hedlund said, “that he couldn’t wait for his father to get home from work, that all the kids would be hanging on Neal’s biceps.”

Hedlund had read On the Road in high school. “I started with Fitzgerald and Salinger—I moved on to Kerouac, Bukowski and those cats,” he told me. “I was fascinated by the spontaneous prose and the thought process—reading about getting out and living life. Of course, you’re reading it, and you’re still in high school and you have a curfew. You get jealous.”

On the Road spearheads the beginning of a small wave of Kerouac adaptations: Michael Polish’s version of Big Sur—the story of an alcoholic breakdown previously described in Curt Worden’s 2008 documentary One Fast Move or I’m Gone. This new film of Big Sur uses the real names of the characters; Josh Lucas is billed as Neal Cassady.

Daniel “Harry Potter” Radcliffe plays Ginsberg in Kill Your Darlings, a film of a key event in Kerouac’s life: the time the author (played by Jack Huston) was nearly arrested as a accessory after the fact to a murder.

The other day, a fellow fan and I were wondering why The Dharma Bums, one of Kerouac’s best books, never made it to screen. It could be shot for cheap in the Sierra Nevada; moreover, of all Kerouac’s mentors, the poet Gary Snyder (called “Japhy Ryder” in the book) is perhaps the least ambiguously admirable.

Kerouac’s books are still carried by travelers, who can read the rapid prose and marvel at the eye and ear, the ebullience and the sorrows. We’re already nostalgic for the time and space of the pre–Interstate America. The Fort Sumter of the Culture War may have been the 1978 deregulation of airlines, making airfares cheap and making the restless want to go airborne, changing what once was the Heartland into what is now Flyover Country. The film of On the Road, done at last after so many false starts, recovers the beauty of speeding over land, heading no place in particular.