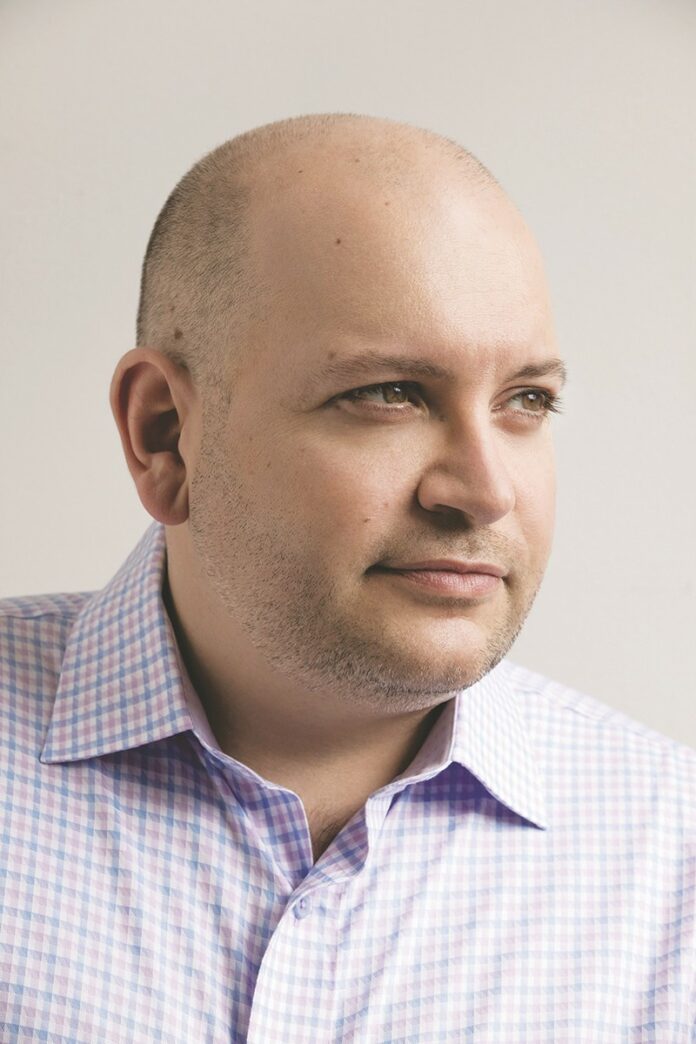 When the chips were really down for Jason Rezaian, the Washington Post reporter and former Iranian hostage says he’d reflect on one of his late father’s Yogi Berra–type malapropisms.

His father, Taghi, an Iranian émigré to Marin County in the 1950s was “filled with jokes,” says Rezaian, “He had these sayings that didn’t make 100 percent sense, but when you thought about it, they did.” His dad, well-known in the community, ran a Persian rug emporium in San Rafael for decades, and Rezaian says he still has lots of relatives in and around the Bay Area, though he hasn’t lived here for years.

While reporting on Iranian life for the Post in 2014, Rezaian and his Iranian wife, Yeganeh Salehi, were arrested by Iranian security forces and accused of espionage.

He spent 544 days in the country’s most notorious prison, known as Evin—around six months of those in solitary confinement. His ordeal is recounted in Prisoner, a memoir just published on the late Anthony Bourdain’s imprint at HarperCollins, Ecco Books. He’s back in his hometown for several readings scheduled around the Bay Area.

The Marin County native, a graduate of Marin Academy High School, is in his early 40s and lives in Washington, D.C., now with his wife. Before their hostage crisis, they’d decided that they’d never have kids—now he says they’re considering it, though with a laugh he adds that the nine-month window has not yet opened.

Rezaian was subjected to intense psychological torture during his ordeal, which ended when he was freed as part of President Barack Obama’s negotiation of the Iran nuclear deal in 2015. His detainment included multiple threats that he’d be executed. He was repeatedly told to sign a confession as a condition of his release but heroically held the line against his captors and only ever admitted to doing his job at the Post, which was to report on Iranian life from the street-side and culturally engaged perspective of a returning son.

He tried to not worry, despite his guards’ numerous threats that they’d cut off his fingers and toes, that he’d be executed. He spent months in a solitary confinement cell in the prison, and even there, he says, his natural optimism helped him to deal with the soul-crushing conditions.

“You have to keep separate sets of mental books,” he says by way of explaining how he survived long periods in solitary. (As his plight unfolded, Rezaian would eventually spend significant time with other inmates in a two-person cell.) “On the one hand, the fear and anxiety is omnipresent. But you learn that if you let that take everything over, it takes everything over. This is not a place where I or anybody wants to be, and I looked at my situation as always: I’m in this prison, considered one of the worst in the world. But just around me, I could see people who were in worse situations, cellmates who were more isolated, who couldn’t speak to the guards.”

Rezaian would come to look forward to his interrogations, he says in his book, because they would at least afford him human contact. He eventually came to appreciate that he was a player in a big unfolding negotiation between the United States and the Rouhani regime. He thought: “This is horrible, but it could be worse and worse and worse. Some days, it did get worse. Other days, there were glimmers of hope. I’m optimistic by nature.”

The first few weeks of Rezaian’s confinement were filled with fear and bewilderment. “I didn’t know what to think,” he says, and in his book writes how he repeatedly claimed his innocence and that this was all a big mistake. That was the first few days, he says. “Then the reality sets in.” His guards told him that the whole world already thought he was dead anyway, that the Washington Post didn’t care, and neither did the Obama Administration.

“Then the fear of influences on your thinking comes in,” he says. The guards would take him out of his “tiny vacuum sealed cell,” and then at least he’d be having interactions with people, even if they were threatening to cut off his fingers. Now Rezaian saw his captors let down their guard a bit. They threatened him with physical violence but never beat him. “Then you start to see—this is a hostage-taking. This particular moment in this country’s trajectory is not going to be served by killing an American.”

Still, he did fear that he’d be left behind in the Iran nuclear deal since scrapped by Donald Trump. Rezaian feared it might be a long time before he was released.

What he could not and did not know while in prison was that his older brother, Ali, his employers at the Post, officials in the Obama Administration—not to mention Marin Congressman Jared Huffman—were working on his release from the day he was arrested. “I can’t say it because I’m a journalist working for the Washington Post,” he says with a laugh, “but vote for Huffman!” He credits the pol for his dogged efforts on his behalf; Huffman was at a German airport to meet Rezaian when he was released.

Upon his release, Rezaian recalls that it was encouraging to him to know, in hindsight, that every time then-Secretary of State John Kerry met with his Iranian counterparts during the nuclear negotiations, Rezaian’s name came up in the negotiation.

That was encouraging. “What’s disheartening,” he says, “is that several [Americans] have been taken hostage since I was released, and there is no conversation going on with the United States and Iran right now, and for those people who are saying, ‘Don’t talk to evil, don’t negotiate with evil,’—well, that’s shortsighted,” and of no comfort to the hostage’s families.

The brutal murder of Rezaian’s colleague, Jamal Khashoggi, hangs over our conversation, as does the gourmet ghost of the late Anthony Bourdain, who filmed Rezaian for his Parts Unknown show in a segment about Persian cuisine, before the hostage-taking, and urged him to write Prisoner after his release.

First, Khashoggi, a Washington Post columnist who was murdered by Saudi Arabian officials last year: “The one thing in which the murder of Jamal and what happened to me are connected, or have in common: both are two instances of authoritarian regimes using extraordinary means to silence journalists who were writing about them. Full stop. Not even writing about them in ways that they didn’t like—in my case it was taking the pen out of my hand, and getting leverage with America. In Jamal’s case, it was simply, we are going to silence this person in an audacious and horrifying way so that other people are silenced too.

“I don’t want to compare and contrast the Iranian and the Saudi regime, they are both terrible,
but I will say that this act by the Saudi regime, along with the war with Yemen, the crackdown on dissent within their own borders—I don’t think this is something that most Americans can wrap their minds around. They routinely behead people.”

He says that the disconnect between the American posture toward Iran and Saudi Arabia is an “incredibly disheartening” thing to behold in Washington, D.C. Trump has reportedly been trying to figure out a way to go to war with Iran for the past two years, instilling fear and propping up the “Death to America” rhetoric that Rezaian says woefully misreads the Iranian mindset toward America. “Juxtapose that with the way that this administration has responded to the death of my colleague, someone I was getting to know.”

“The most noteworthy thing about Iran is its people,” Rezaian adds and highlights an ancient culture with rich musical, literature, poetry, film and food traditions. “My money is always on the Iranian people,” he says. “They are resilient, they are smart, and over time they’ve made it clear that they are dissatisfied, the majority of them, with the rulers of this country.”

He suggests that the United States, as it promotes policies advertised as good for fomenting democracy and good for Iran, should take a look at whether travel bans and crippling sanctions are accomplishing the mission. “How can we say we support your quest for freedom when we’re not going to let you come here?”

Rezaian recalls a time in the 1960s and ’70s, before the Iranian hostage crisis, when Iranian students comprised the highest percent of foreign-born university students in America—many of them receiving their education in the Bay Area, long a destination for Iranian immigrants. “I don’t think there is hatred of America,” he says.

Rezaian’s time spent reporting on the streets of Iran left him with a clear impression that, instead, “Iranians are probably one of the most pro-America populaces” in the Middle East. “People are tired of the ‘Great Satan’ state media stuff.” Despite the longstanding Friday ritual of burning American flags in Tehran, he insists, “there is not rabid anti-Americanism in Iran.”

And then there’s Bourdain. Rezaian says the author and TV host’s 2018 suicide “remains, continues to be, the hardest thing that my wife and I have to grapple with.” He’ll get stopped on the street, he says, by Bourdain fans who saw Rezaian and his wife on his show during an episode filmed in Tehran six weeks before he was arrested. Rezaian says of himself that he’s not a gourmand but is a big lover of food (he lost lots of weight in prison, he recollects in the book), and in an interview, recalls a Marin youth filled with visits to the bustling multi-ethnic food scene on Fourth Street in San Rafael. “It was one of the great culinary destinations that nobody knew about where you could find food from all over the world,” he recalls.

During his ordeal in Iran, Bourdain’s celebrity status, he says, “gave a spotlight to our imprisonment that nothing else could.” The episode aired numerous times during his imprisonment and Rezaian says with obvious emotion that he “had no idea the lengths to which [Bourdain] was advocating for me publicly and privately while we were there.”

A few weeks after their release, Rezaian and his wife met with Bourdain for a meal in New York City. “This is a guy we are meeting for the second time, 20 months after the first time. It was an incredible roller coaster ride for us in the meantime—and it turned out he had been an incredible friend to us while we were in trouble.”

Bourdain encouraged Rezaian to write his story, and he did the “traditional thing,” he says—wrote a proposal, shopped it around to 14 publishers, six of whom made offers, including Bourdain’s Ecco imprint at HarperCollins. Rezaian then got an email from Laos, from Bourdain. “It was more like, whatever you decide, I’m going to be there for you,” Rezaian recalls. Bourdain added, “‘I’ll be a vocal and spirited advocate no matter what. Give my offer some consideration.’ When you get something like that, how can you say no?”

Rezaian sighs and reflects on his interactions with the late Bourdain. “We’re doing this for Tony.”