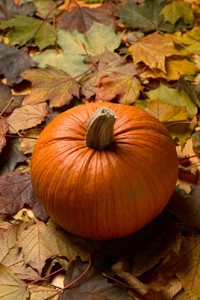 Does fresh pumpkin really make a difference in a pie?

Fresh food–real food, as opposed to canned food–is supposed to be better, right? I’d rather lay into a helping of lardy-good refried beans from the local taqueria than one of those pasty El Paso blobs from the can, and everyone knows that Mom’s chicken soup runs circles around Campbell’s.

This is why, for years, I have cooked and puréed my own winter squash for cooking and baking. After all, it’s not like cooking a squash is hard–it cooks itself, practically–and the results are so much better. In the case of pumpkin pie, I wasn’t so sure.

About seven years ago, back when I was all hopped up on the concept of making every single damn little thing from scratch, I declared to my family that I’d be tackling the Thanksgiving pies that year. After Mom saw me return from the grocery store with two adorable sugar pie pumpkins, she dispensed what she thought was a valuable nugget of motherly advice: “Use a can.”

But no, I did not listen, and instead of smooth and luscious, the pies were rubbery and–if you can imagine it–tough. Was it the pumpkin, was it the recipe or was it me? All of the above, perhaps.

Spurred on by this defeat, I persevered and eventually was able to produce pies of freshly puréed pumpkin that were perfectly edible and sometimes even enjoyable. But the thought that I might be wasting my efforts only grew stronger, and I knew there was only one way to silence it: I would bake two pumpkin pies, one from the canned stuff, the other from pumpkin cooked and puréed at home. Then I would subject them to a taste-off.

I wanted to give each competitor a fighting chance, so I set out to purchase the most spectacular pumpkin in sight. Cooking reference books advise selecting a pumpkin that’s not too big (older pumpkins can be fibrous) but feels dense for its size. My desire was to find either a cheese or sugar pie pumpkin, as both are celebrated for their flavor, but my search turned up no such specimens. At the local farmers market, I found but one smallish whole pumpkin, and when I asked the vendor if she knew what variety it was, she replied in the negative. “Can you cook with it?” I asked. “Um, I don’t see why not,” she said.

Unconvinced, I looked elsewhere. Winter squash abound at the grocery stores, but only one offered pumpkin: Safeway. The Safeway pumpkin carried no pedigree; the only indicator of its identity was a sticker on its side with an unenlightening PLU number. But that’s what I bought, along with a can of Libby’s 100 Percent Pure Pumpkin.

You can actually find out a lot of things from the label of a can of Libby’s 100 Percent Pumpkin. For instance, pumpkin is rich in vitamin A; it is “perfectly safe and acceptable” to enjoy Libby’s 100 Percent Pumpkin “straight from the can”; and pumpkin is an excellent source of fiber. The label also includes the recipe for Libby’s Famous Pumpkin Pie, which, in the world of pumpkin pies, is popularly thought of as the recipe for pumpkin pie. Just as ketchup means Heinz, pumpkin pie means the Libby’s recipe–no matter what brand (or nonbrand) of pumpkin you may be using.

With this in mind, Libby’s Famous Pumpkin Pie became the control recipe of the fresh vs. canned duel. I cooked the fresh pumpkin according to the succinct directions of Farm Journal’s Complete Pie Cookbook. I was able to cobble together both pie shells from various plastic-wrapped parcels of pastry trim that I stockpile in the freezer (this is a good habit, and one that will reward a diligent baker with almost instant pies!). While I put them in the refrigerator to chill and firm up, I opened the Libby’s can and compared the specimens.

The fresh purée was yellow-gold and watery, almost pallid. It smelled vaguely of retirement-home cafeterias; its mouth feel echoed baby food, with a slightly chalky finish. The flavor? Bland.

The purée from the can, meanwhile, was an alluring, saturated orange-red. Its aroma was familiar, almost primal, calling to mind everything that is autumn: vibrant leaves crackling under your feet on the sidewalk; the buttery yellow crescent of a moon holding water over a cornfield. Compared to the wan fresh purée, the canned purée was rich, almost spicy, with a subtle sweetness and depth.

It seemed unfair, as if the canned purée had an advantage merely for conjuring up bygone seasons of my childhood because of the Pavlovian allure of its aroma and appearance. I hadn’t cracked open a can of pumpkin purée in years, and it was wonderful.

To level the playing field, I gathered the fresh purée in a cheesecloth and squeezed out some of its liquid (about a cup, actually) until its consistency matched that of its canned counterpart. After mixing each pie filling in a separate bowl, the differences between canned and fresh were not so visually glaring, but still discernable. I slid the pies into the oven at the prescribed 425 degrees F and set about cleaning up.

Ah, cleaning up. There was a gooped-up potato ricer, a tower of Cuisinart attachments, a length of orange-clotted cheesecloth–all that from the fresh purée, while the canned left traces only in a recyclable metal cylinder and the can opener employed to access its contents. Quickly my prejudice listed even harder to the side of convenience.

The recipe called for reducing the temperature to 350 degrees F after 15 minutes of baking. (The reason for this temperature shift is twofold: a longer bake at a lower temperature will leave you with the dreaded soggy crust, while a shorter bake at a higher temperature will compromise the silky texture of the custard.) Once pulled from the oven, the pies were nearly identical, except for the canned pie’s slightly darker hue.

Finally, after cooling, it was time for the taste test. The otherwise faithful Mr. Bir Toujour opted out of the tasting, citing a general aversion to all things pumpkin (loser!), so I was left to tackle this task alone. Both pies were delicious, but Libby’s was one degree more intense in every department: taste, texture, bouquet.

Even so, I realized how inconclusive the test was. What if I had located a genuine heirloom pumpkin, prized for its flavor? What if I used a recipe calling for heavy cream instead of evaporated milk? What if non-Libby’s canned pumpkin carried a strange aftertaste? I could conceivably continue baking pumpkin pies well into spring and come up with different results every time.

But I was generally satisfied. With nearly two whole pies left to consume unaided, I put them in the refrigerator. This brought on an early spurt of snacking on cold pie slivers straight from the fridge, a pleasure typically limited to those few days of post-Thanksgiving fatigue and gluttony. How did the fresh-purée pie stand up to the canned-purée pie during this all-important fridge test? Well, they tasted pretty much exactly the same to me.

Pumpkin-weary, I offer this advice: when contemplating a pumpkin pie, reach for the can. Of course, you are 100 percent free to disregard this nut of wisdom–it’s firsthand experience that makes believers out of skeptics, after all.

Sometimes you’re left with excess pie filling after filling the pie shell. There’s no need to throw it away. Pour it into 6- or 8-ounce ramekins or custard cups, then place the cups in a roasting pan. Fill the pan with enough boiling water to come halfway up the sides of the ramekins and bake at 350 degrees F along with your pie(s). Bake until the filling is mostly set but still jiggly (see below), about half an hour. Since these little pumpkin custard goodies don’t arrive in the carriage of a pastry crust, they have fewer calories and are simpler to prepare.

Recipes always say the pie is done when a knife inserted in the center of the pie comes out clean. What does this mean? It means the knife will be damp but not coated with runny pumpkin pie filling. An undercooked pumpkin pie will, when prodded, ripple; a fully cooked pumpkin pie will jiggle slightly as one unit. Also keep in mind that there will be carryover cooking; as the pie cools, residual heat will continue to set the filling. Nevertheless, when in doubt, it’s best to overcook.

To help that crust get nice and flaky, place the pie on one of the lower racks at the 425 degree stage of baking. Then (carefully, so as not to upset the coagulating proteins in the filling) move the pie to the middle rack at the beginning of the 350 degree stage. Publications such as Cook’s Illustrated advise blind-baking the pie shell before adding a warmed filling to the still-warm crust. While effective, this method may prove too fussy for chefs who are distracted with the thousand other nonpie tasks involved in readying for Thanksgiving.