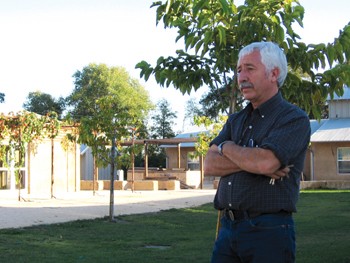 Housing those who labor for our table remains a complex issue

Dressed in well-worn jeans and a work-stained T-shirt, Felipe Calderon sits patiently in the large white tent that serves as a makeshift dining hall, waiting for the arrival of a mobile medical clinic. It is mid-afternoon in October, and the grape harvest is in full swing. Calderon’s day started well before dawn.

“The early work is really tough,” he says in Spanish.

A resident of Modesto, Calderon is with his cuadrilla, a squad of eight who travel around California, Oregon and Washington–wherever harvest work is available.

“Peaches are harder than grapes. Almonds are not so hard,” he says.

While sipping wine on Thanksgiving Day, a toast might be made to the hard work and hard lives of those who made the harvest possible, and to the complex task of finding them a decent place to live.

In the past, migrant workers like Calderon might have crowded together in a run-down apartment or slept in a vehicle, under a bridge or along a creek.

Napa and Sonoma counties have created a number of housing options, from two temporary trailer camps in the Sonoma Valley to vineyard-owned dormitories throughout Sonoma County to community-funded housing camps in Napa Valley. Officials in both counties say far fewer migrant workers now camp outside or in cars, but they aren’t necessarily staying in the housing that’s been provided.

Such facilities are usually well away from town, giving easy access to vineyard work but making residents fairly isolated. There are often strictly enforced rules, such as no alcohol and early lights-out. As a result, this type of housing doesn’t appeal to everyone. Some still choose to find their own places. In addition, an increasing number of workers are hired year-round. Many bring their families and want permanent homes in the community, near schools, stores, churches and other services.

But peak harvest still brings a wave of migrant workers. In October, Calderon spent several nights in one of the two temporary trailer camps in the Sonoma Valley, paying $8 a night. He likes the camp and has no problem with the rules.

The dining tent where Calderon waits is in an open field just south of a wastewater-treatment plant. Between clumps of weeds sprout several light-blue trailers, each a bare-bones bedroom for four men.

Nearby is a shower and bathroom trailer, including a washing machine. There is also an Internet-connected computer in one of the trailers, and a television in a corner of the dining tent. Medical and dental vans visit weekly. Calderon stays in a smaller camp a little farther north in Sonoma Valley, but he comes to the southern camp for medical appointments.

“The objective is to try to help these guys, and to help them as much as we can,” says Rick Uribe, community coordinator for Vineyard Workers Services, which oversees the trailer camps.

Capacity is 52; on this day in October, the two sites house 34. If farmworkers show up broke, they’re can stay free for up to three days while looking for work.

Several neighbors initially objected to placing a camp on church property on Auga Caliente Road, saying the presence of the migrants would create problems, including more crime.

“This is our third year that we’ve had the site on Auga Caliente, and the only incident we’ve had is that someone broke into some of the campsite residents’ cars and stole the radios,” Uribe says.

“The voluntary program here has added a significant number of beds,” says Nick Frey, executive director of the Sonoma County Grape Growers Association. “And of course there are other houses and facilities that predate the ordinance.”

More needs to be built, he says, but the main roadblocks are government regulations and neighborhood opposition–the “not in my backyard” syndrome.

“We don’t want to make all farmworker housing out away from resources so that people aren’t accessible to things you need everyday, whether it’s a grocery store or a school,” Frey says. “You want people integrated into the neighborhood. . . . These people work hard all day. They come home, they’re tired, they need a place to rest.”

In Napa, the wine industry and others fund the efforts of the Napa Valley Housing Authority, which operates three farmworker living centers, as well as a camp of yurts when needed during harvest season. Each center is open 330 days a year, and at least one camp is always open. Alcohol and drugs are prohibited, there is a strict nighttime noise curfew and guests are allowed only in the public spaces, not in the rooms.

Built in 2003, the River Ranch on the Silverado Trail south of St. Helena is the nicest, and it is usually filled to capacity, says Lorraine Stuart, farmworker advocate for Napa Valley Community Housing. A longtime housing center in Calistoga is being renovated with a $1 million grant, and another $800,000 is earmarked to remodel the aging Mondavi camp in the Stag’s Leap district. When that is done, the camps will each sleep two men to a room rather than three.

“We’ll be able to get rid of the bunk beds, which didn’t work culturally and physically,” Stuart says. “The guys complained a lot. Three guys to a room is tight.”

The buildings at River Ranch are clean and modern, making a positive first impression. At dinnertime, the dining hall is filled with male voices murmuring in Spanish, the clatter of plates and silverware and bursts of melody and dialogue from a satellite television tuned to a Spanish station. It costs $11.50 a night to stay at River Ranch, including two hot meals and lunch. Breakfast is typically served at 5am; during harvest, it can start as early as 3:30am.

The bedrooms are clean but stark. Most college freshmen would turn up their noses at the extremely Spartan accommodations. But camp manager Angel Calderon (no relation to Felipe) says people bicycling or driving by have stopped and complained that the camp is a waste of their tax dollars. They tell him it’s “too nice.”

The residents range in age from their 20s to 50s. Most come from rural areas of Mexico. It’s not easy overseeing such a diverse population. Initially, Calderon had to teach some of them not to spit on the floor when using the pool table in the rec room. He’s still battling those who toss their cigarette butts all over the property.

Vineyard work is circular, with stops and starts. There are about four weeks of pruning in the winter, then nothing for four to five weeks, followed by “suckering” the vines for approximately 10 weeks, then another approximately four-week gap before the intense harvest work begins.

“It’s a hard life. They are traveling for years, alone for years,” Calderon says. He sees signs of depression, such as smoking, drinking offsite and looking sad after a long phone call home on one of the camp’s five pay phones.

Not everyone stays in the camps. Many year-round employees have been able to buy a house, but they can’t easily make the payments.

Others crowd into motel rooms. Living conditions are poor but can cost less than the camps, without the camp rules and tight supervision.

And there’s a new wrinkle in Napa County–labor contractors who bus workers in daily from Lodi, Stockton or elsewhere in the Central Valley, says farmworker advocate Stuart.

“It becomes another hardship on the workers to have five or six hours of commuting each day [on top of] spending eight or 10 hours working in the fields,” Stuart says.

It is just one of the latest twists in the complex patterns connecting workers to vineyards in order to produce this region’s major cash crop.