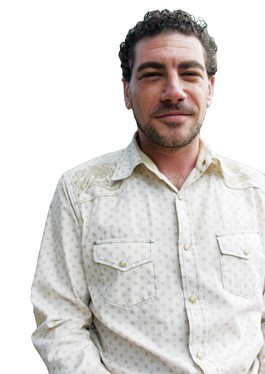 Most kids who grow up in Forestville get the hell out of town as soon as they can. But Tai Olesky, the chef-owner of his hometown’s Mosaic Restaurant, can’t understand why anyone would want to leave. “I’ve been all over the world, and I personally think that this is the best place,” he says. “To me, it’s not a small, podunk town; it’s the last of the special towns. There is no Burger King here. I appreciate that. It’s not homogenized.”

Growing up, Olesky used to eat with his family at Chez Marie, a low-slung building on the short strip of his hometown’s main street that’d been a restaurant since 1958. When Olesky was 28 years old and an executive chef at the Hilton, his golden opportunity knocked. The owners of the old restaurant wanted to sell, and Olesky jumped in.

Four and a half years later, lounging in a Western shirt and jeans on one of the restaurant’s leather couches, Olesky, with longtime sous chef Michael Adams, has turned the modest, awningless storefront into a highly rated creative outlet for his culinary imagination. “I’m just getting better at what I do, since I’m self-taught,” he says, sipping a day-off glass of Champagne. “I learn as I go. I think it’s a lifelong craft.”

The front door at Mosaic—the name plays on the “Ferraris to flip-flops” feel of the Russian River area, as well as Olesky’s amalgamation of food philosophies—opens immediately into a softly lit dining room, a quaint couch-and-coffee-table wine lounge and a large outdoor patio complete with a fire pit and giant Japanese maple and redwood trees. Dishes range from California cuisine with a world-fusion twist to unique house specialties. Be sure to ask for the locally grown mushroom special, an in-the-know secret that’s not on the printed menu: mushrooms, oil, shallots, Madeira, cream and herbs on toasted bread never tasted so good.

A chicken sandwich with avocado aioli, bacon and sweet peppers redefines comfort food, but by press time might be replaced with something new. Olesky changes the menu seasonally, but one signature item stays. He’s tried occasionally to retire the coffee-encrusted filet mignon with chocolate Cabernet demi-glace, but to no avail. “People were seriously upset,” he laughs.

With a half-acre farm in Healdsburg and a one-acre farm at his house, just around the corner from Mosaic, Olesky sources as much as he can on his own. “We have 200 varietals of tomatoes already sprouted right now,” he says. “We have chickens; all the scrap from the restaurant feeds the chickens. We get their eggs for our house-made pastas and desserts. We do everything from scratch.”

Owning a restaurant comes with the usual stresses, Olesky acknowledges, but it’s the occasional charge that Mosaic is gentrifying Forestville that really chaps his hometown hide. “I’m not trying to ‘change the face’ of Forestville,” he sighs. “How could I? I’m from here! This is for the community. You don’t have to be pretentious or from somewhere else to make it ‘better.’ And it’s not better; it belongs. It’s part of it. We’re no better than Carr’s Drive-In or the Forestville Club. There’s a sense of place here, there’s a true community. It’s exactly what it’s supposed to be right now.”

Still an avid world traveler (Paris and Germany in the last year, the Superbowl in the last week), Olesky jokes that he “might be comfortable” living in the south of France or northern Italy, but he hasn’t yet found a spot on earth with more world-class farms and wineries within a 10-mile radius than Forestville.

“Food and wine are my passion, my life. It’s what I live for,” he says. “I eat out, I love to forage, fish, go out to the coast. I’m mostly a student of life. I’m a pretty simple guy. I love all of West County, through and through. I really do. You either get it or you don’t. This is the good life. Forestville, ‘the Good Life’—that’s the motto here. I have to agree with that.”Mosaic Restaurant and Wine Lounge is in the $39 prix fixe category for Sonoma County Restaurant Week. 6675 Front St., Forestville. 707.887.7503.