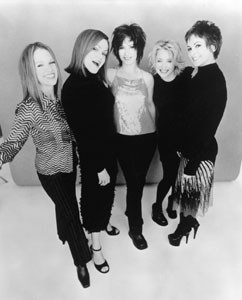 Go-Go’s still got the beat

Flowers bloom and fade too soon / What happened to our daisy chain?

With that simple chorus, the Go-Go’s capture much of the emotion surrounding a whirlwind career that saw the group reach the top of the charts with their first album, 1981’s Beauty and the Beat, then splinter in a bitter breakup just four years and two albums later.

That chorus comes from “Daisy Chain,” a pretty ballad soaked in regret that closes God Bless the Go-Go’s, the studio CD released last year by the reunited group. The song’s verses capture the giddy highs of million-selling success, the debilitating pace of the group’s career, and the pain of the split that came in 1985.

“It means a lot to us–and also in making this record–coming to terms and overcoming a lot of stuff to get to this point; it was just such a poignant and such a well-written song,” Caffey continues.

With rockers like “Stuck in My Car,” “La La Land,” and “Kissing Asphalt,” the album recalls the crisp and catchy blend of pop, punk, and surf rock that typified “We Got the Beat.” Other songs, such as the ballad “Here You Are” and the powerful midtempo tune “Automatic Rainy Day,” reflect the more mature personality of Talk Show, the underrated 1984 album that closed the Go-Go’s original stint together.

“We didn’t want to change who we are,” Caffey says of the new album’s sound. “We’re not going to sit there and go, ‘Let’s be a rap band now.’ I mean, we were just like, ‘What’s the essence of the Go-Go’s?’ Great melodies, guitar hooks, driving drums–it’s like all of that.”

Getting to the point where the Go-Go’s could become a full-fledged recording and touring band has not been easy. The split itself was acrimonious and left plenty of hurt feelings. During the four years that followed the breakthrough of Beauty and the Beat and its two hit singles, “We Got the Beat” and “Our Lips Are Sealed,” the Go-Go’s toured practically nonstop, partied almost as incessantly, and endured arguments fueled by everything from creative differences to ego problems.

As Caffey described it in an interview in 1990, “It was horrible. We didn’t like each other. We didn’t speak to each other for years.”

Today, Caffey has more perspective on the factors behind the split. “There was not one single thing that made the band break up,” she explains. “I have to say, probably above and beyond anything, it was [that] we didn’t have lives outside of the band, number one. That was one thing. Number two, forget all the drugs, forget all the egos, forget all of that–I mean, that’s part of it. But I think the main thing was, we didn’t know how to say no and stop and take breaks and rejuvenate.”

According to Caffey, some of the creative differences and personality contrasts that hindered the group in the 1980s still exist. The difference now, however, is that the Go-Go’s have learned how to deal with those issues.

Caffey knows that one obstacle facing the group is how to convince people that the Go-Go’s are a current, contemporary band. Their sound has influenced dozens of alternative rockers–one of whom, Green Day’s Billie Joe Armstrong, teamed up with the Go-Go’s to cowrite “Unforgiven,” the lead single from God Bless the Go-Go’s.

“Part of our history is, we started in the ’80s,” Caffey says. ” So many people have grown up with us and they’re here now. We’re lucky.

“And as far as being labeled as an ’80s group–some people will probably end up doing that, and that’s OK,” she continues. “People are going to do that. But we haven’t stopped yet.”