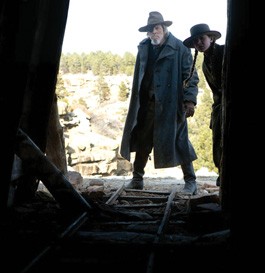 The Filth and the Fury

Mattie Ross (Haile Steinfeld) is a self-assured 14-year-old. She arrives in Fort Smith, Ark., in the early 1880s to track down the hired hand who murdered her father. The killer, Tom Cheney (Josh Brolin), “lit out for the territory,” says the sheriff, as if describing Huck Finn. The sheriff lists some U.S. marshals who could possibly track Cheney; Mattie chooses Reuben “Rooster” Cogburn (Jeff Bridges). Ruthless and dead to fear, though often dead to the world, Cogburn “likes to pull a cork,” says the sheriff.

First seen in the courtroom, Cogburn is a greasy-haired, one-eyed man pushing 60. Winter light from the windows behind him illuminates a three-gallon cuspidor at his feet. Bridges lulls us with his take on the part—a bass-voiced good ol’ boy who sounds like Arkansas’ Billy Bob Thornton in Sling Blade. Note the eccentric pronunciation: “snike” for the reptile, “dronk” describing that the state Cogburn is often in.

The early scenes of Mattie and Cogburn together play out like a duel of the Orsons. Steinfeld has the smooth-faced, sotto voce way of the young Welles, who made every comment sound like an aside to the audience. Grumbling Rooster Cogburn resembles the old Welles, especially his Hank Quinlan in A Touch of Evil.

Mattie offers the marshal a $50 reward to cross into the Choctaw lands to retrieve Cheney. While awaiting his decision, Mattie encounters LeBoeuf (Matt Damon), a fancy, buckskin-covered ranger who’s seeking Cheney for a previous murder down in Texas.

The three, reluctantly matched, discover that Cheney has thrown in with the gang of Lucky Ned Pepper (Barry Pepper, displaying almost courtly lucklessness). The pursuers draw closer to Cheney but feud along the way—about the Civil War, about Texas metaphysics, about Cogburn’s drinking. Mattie’s unpolished honesty brings out the best in both, the part that is larger than life.

True Grit was John Wayne’s finest work, and Wayne knew it. He never performed better than in the campfire scene in the 1969 film, with Rooster Cogburn talking about his wife and kid back in Cairo, Ill. Bridges does the same monologue conversationally as he rides, since his Cogburn likes to fill the frontier void with talk. This True Grit is not a movie about strong silent men, and Bridges does things that John Wayne wasn’t capable of as an actor—he expresses the desperate underside of a bluff, a rowdier level of buffoonery and a quitter’s despair.

Even if Wayne was short of breath and stout in 1969, he was indomitable. The last mounted leap over a graveyard fence showed us the actor’s bid for immortality. In this True Grit, Bridges shows us something truer: mortality, the gravity of killing and being killed. The Coens have the bravery to deliver the downbeat coda to this story left out in 1969. It increases the stature of this film, its depth, beauty and sadness.

With haunted, cold-weather photography by the always-remarkable Roger Deakins, the film is oddly Christmassy; see the final ride under frozen stars, the slight blowing snow around watchful figures, mounted and motionless, and the browned, daguerreotype tones, in which the lone spot of color is Bridges’ single blazing blue eye. All told, True Grit delivers a flawless match of rich performances and austere visuals.

‘True Grit’ is in wide release.