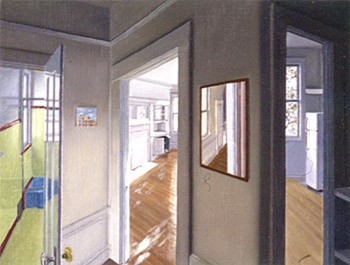 Come In: Dalton Jamieson’s ‘View of Three Rooms and a Mirror’ is included in Julie Baker’s ‘Views’ show.

SMOVA exhibit raises the stakes and the odds

Visiting 15 art exhibits sounds like a worthy resolution for a full New Year, involving all the ordinary hazards of remembering to attend the opening reception, driving there and parking, fighting through the crowd for a small piece of cheese, and then elbowing back again to stand on tippy-toes to possibly see what little you can of the art on the walls. And then, of course, doing all of that 14 more times before year’s end. Perhaps this is a worthy resolution for more than one New Year at a time.

Which is why the Sonoma Museum of Visual Art is so marvelously helpful in bringing 15 mini exhibitions together all at once, putting the work on view for months, and then having a big old party at the end, after all interested have had a good, long chance to belly right up to the walls.

For “The Curatorial Eye: Fifteen Perspectives,” SMOVA’s sixth annual fundraiser and auction, SMOVA executive director Gay Dawson has invited 15 guest curators, including herself, to stage mini exhibitions of 10 pieces each, totaling work by 150 different artists. The results promise to be more complex than just a simple math equation.

Much larger in scale, scope, and financial ambitions than previous years’ auctions, “The Curatorial Eye,” which runs from Jan. 12 to March 7, with the auction planned for March 8, aims to raise $100,000 for the museum. According to Dawson, they raised some $40,000 last year.

Well, that is a simple math equation. From whence the extra $60,000? She chuckles gamely. “We’re still going to deliver a museum-quality show, but to the usual silent art auction, we’re adding a live auction.” Those, for example, who could use a mint condition 1967 Volkswagen in which to carry their art home are well advised to grab a paddle when LBC executive director David Fischer begins the live auction, as this is one of the main prizes of the night.

But the art remains the story. Dawson’s contribution is titled “Spring Grass.” “It’s a mini show about rejuvenation in the same way that things die back in the winter,” she says, noting with a laugh that the phrase is also a reference in Japanese art to pubic hair. “But,” she hastens, “the way that I’m using it is with renewal.

“The works in my show are all subtle and about finding life again, finding life in something dead, coming to life, or a peaceful rejuvenation,” Dawson continues. “It was a spontaneous idea; it occurred to me in a flash of insight. There’s something about a mini show–you can be a little zany. Maybe it’s a topic that I wouldn’t have the occasion to do in a larger show.”

Two artists who recently had residencies at the Marin Headlands Center for the Arts–Bill Ivey and Christiane Löhr–are among Dawson’s picks, both of whom work intensely with objects from the natural world. Löhr is involved with the compelling geometry of nature; Ivey, Dawson says, “works a lot with the idea of dead/alive. [His contribution] is a redwood sprout encased in cement.”

How will we know that it’s in there?

“Some of the artists are not particularly ironic,” she assures drily. “They’re pretty straightforward.”

Known for his obsessive pen-and-ink drawings of boiling viral structures, Sonoma State University art instructor David D’Andrade examines the less linear forces of fear and complacency in his curatorial contribution of the same name. His list of artists is a familiar string of best beloveds, including San Francisco painter Amy Wilson–whose compulsively girly canvases were on show last May at SMOVA–and emerging painter and printmaker Frank Ryan, whose work enjoyed an unseemly rave-about in these pages just last October. But why the theme?

“Fear and complacency are what’s going on right now with impending war and fear of terrorism,” D’Andrade says. “It’s been on my mind–I’m sure that others are thinking the same thing–and I wonder how it affects the production of art. Has it,” he asks rhetorically, “changed people’s work?” D’Andrade somewhat sheepishly admits that it hasn’t much affected his own. “I’ve been working with this virus thing for a while,” he says. “I like the anxious theme, and there’s a certain amount of beauty to it–it can look both floral and alien at the same time.”

Other, possibly calmer, exhibits in part include Dominic Egan’s “Take One or Take All,” a photographic exhibit based, naturally enough, on the Ten Commandments; Santa Rosa artist Al Longo’s gender inquiry titled “It’s a Guy Thing”; SSU Art Gallery exhibition coordinator Carla Stone’s salute to the work of faculty, BFA candidates, and alumni; Marian Parmenter’s short sample of those who exhibit with the SFMOMA’s rental gallery; and Lydia Welch’s all-fiber exhibition, “Surfaces/Textiles.” Julie Baker’s “Views” confronts how we edit the world around us; Jonathan Gregory takes on the untutored with “Outsider Art”; and Mary Hull Webster muses on “Interiors.”

And then there are the artists gathered in the San Francisco-based collective known simply as VERN, who introduce “VERNland” to the North Bay with “The Curatorial Eye.” VERN curator and member Chris Natrop explains that the moniker was jocularly used among the seven core artists to address each other, as with the simple elegance of that salutary phrase, “Hi, Vern.” They decided to call themselves this collectively when they realized its placeholder in the French term vernissage, which means a private preview screening of an exhibition.

Ranging in age from 32 to 51, the artists of VERN formed just a year ago as a reaction to the dire toughness of making a mark all alone in the modern art world. Pooling resources, abilities, and contacts, VERN has, since its inception, shown in San Francisco, Los Angeles, New York, Genoa, and Chicago, with exhibits slated this year for Romania and Berlin, and more shows in New York and Italy.

“It’s been really accelerated for us,” Natrop admits. “It’s the energy of the collective.” Having a solid professional background in design and marketing doesn’t hurt much either (Natrop joking that he “resigned” from the design department of Wells Fargo bank last year). Nor does it hurt to have a VERN-ite who owns San Francisco’s Melting Point Gallery, as does member Tyrome Tripoli. But those extra niceties aside, it’s VERN’s work that keeps making the point.

Utilizing paint, sculpture, found objects, paper scraps, and video, VERN sets itself the challenge of doing nothing but landscapes for this show. But Natrop describes it as “definitely pushing the limits of landscape. One guy created a blue color field painting just called Sky. Another guy did a sculpture called Rubber Highway that is a large rubber belt bolted together to make a floppy highway. I’m really excited by the result, because it shows all the different ways that landscapes can be represented.”

The pressing question of course becomes what the seven to 10 highly creative members of VERN choose to fight about.

“Oh, you know,” Natrop laughs, “what kind of wine to have at the reception, should we put a tip jar out on the table.”

More seriously, he says, “There’s always going to be tension when you’re working in a group. In the beginning, it was really hard to figure out how to curate our shows, because everyone as individuals wanted to show everything that they loved. Now we have a director for every show, who acts as a curator and organizer. We have a lot to offer, and we all put feelers out. At the end of the day, it’s really about the art.

“One philosophy that I have is that there are a lot of really good artists in the world, but there’s a lack of opportunity. Knowing that our art is good, we’re trying to create the opportunity.”

And so is the SMOVA.