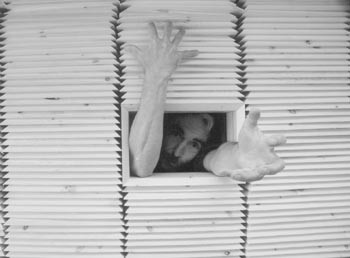 Gallery Route One artists think inside the box

On a hot, early-June Sunday, the great-nephew of the last Russian tsar merrily stands smack in the middle of the road, wearing an oversized cardboard box. A silly hat tops his head, and the home-picked geraniums decorating the sharp angle of his shoulders bravely withstand wilting as he practices his tin whistle. Around him, overheated princesses in floral dresses and sticky nylons fan themselves, a horse delicately lifts its tail to soil the ground, and someone driving a car fueled solely by cooking oil puffs by, leaving the rancid smell of old popcorn behind.

It’s Western Weekend in Point Reyes Station, and the parade has begun. Flanked by environmental activists in front and preschool gardeners behind, the artists collected in support of Gallery Route One begin their dancing in the street.

Three of them, wearing cardboard boxes so large that they require foam padding to support their wearers’ shoulders and assistance to be lifted on, twirl in practiced formation. Stopping on cue, they spell out their message to the sprightly tune of a Romanoff’s whistle. Twirl one: The. Twirl two: Box. Twirl three: Show.

A documentary-film crew swarms in, the director holding a microphone to the bearded face of an Englishman in a fetching girl-group wig and golden beads. “How do you feel?” she shouts.

No reason not to feel great: guerrilla marketing has come to West Marin, bringing with it the power of PBS, a riotous art auction and exhibit, and perhaps a book deal. The Russian royal lineage was there already.

Now in its fourth year, “The Box Show” fundraiser for Gallery Route One, an artists’ cooperative with 21 members, began for 2002 in far more humble circumstances than its zany parade formation might indicate. Working literally for weeks and making (he should know) 32,000 right angle cuts with his table saw, gallery member Nick Corcoran eventually turned a high pile of plain pine shelving into 150 wooden boxes. Over 400 people wanted one, a lottery was held, and the lucky 150 recipients–artists, nonartists, and children–tottered off in May to contemplate their bare pine “canvases.”

Each exactly the same when they left–unembellished, sized in repetitive dimensions to perhaps fit a small pair of women’s shoes, laboriously glued and fitted into place–these unassuming containers have recently arrived back at the gallery in 150 completely different guises.

Some, for example, are now lamps. Others have morphed into thickly painted tables. One holds a live goldfish; another, an inset of papier-mâché goldfish. One is totally shellacked with junk mail, while another is now an elegantly copper-sheeted home altar; many are mossed and feathered as sweetly as fairy homes. Arte á Porter sports a thickly organic painting on wheels, replete with handy carrying handle. One is covered in zinc; another with baseball cards. This one was completely shredded and rebuilt in wood shards as Porcu Pine; that one was hacked into indifferent pieces and tied up with string, albeit lovely, hand-batiked silk string.

Corcoran himself carefully cut his up into 100 slices and reweaved it, like a children’s craft project with Popsicle sticks, into a new, boxy semblance. “I call it Basket Case,” he laughs. “After making all of these boxes, you like a little revenge.”

But revenge is hardly the motive. An annual fundraiser that last year netted this small, nonprofit cooperative over $14,000, “The Box Show” is actually something of a phenomenon: a 30-minute documentary film is being made on the 2000 exhibit for PBS, and there are rumblings of a “Box Show” book in the works.

“The hook is the versatility,” Corcoran explains. “Everyone starts out at the exact same point. We have professional artists who have been [making art] for 50 years, and we have people who have never made a piece of artwork in their lives. It’s a great leveling.”

Corcoran hit on the idea four years ago when someone gave him 50 small boxes. He thought of distributing them to artists for decoration but realized that the resulting raffle wouldn’t net much. “It was a series of small incidents,” he says, that brought him instead to make 111 same-sized containers that year. He did 120 the next year, and as demand has grown, so too has the silent auction and the number of boxes made. “I thought that I was going to do it for one year, and now it looks like I’ll be doing it for the rest of my life,” he chuckles.

Corcoran’s partner, artist Betty Woolfolk, is among the original cofounders of Gallery Route One, which celebrates its 20th anniversary next year. “People got tired of dealing with the galleries in the city, and also there just weren’t enough venues for artists,” she says, explaining the gallery’s origins.

Boasting a rigorous screening committee that ensures high artistic standards, Gallery Route One is something of an oddity, placed as it is in the wilds near a national seashore. “We wanted to have a professional exhibition area set in a rural area,” Woolfolk under-scores. “We have international shows. We’ve had a show of artists from Hungary and a show with artists from the Soviet Union where all the work had to be carried out [of the country] by the artists. We had a show of San Quentin inmates’ work before it was cool to do that–and it was a really powerful show. We’re trying to bring interesting exhibits to the community that you might otherwise have to go into San Francisco to see.”

Vickisa, a gallery member who prefers not to use a surname, gushes, “It’s an epic gallery; I’m really thrilled to be part of it. You can actually talk about art.”

With strong impetus from Inverness artist Mary Eubank, another cofounder, the gallery has moved beyond its original mission. Now it’s also a nonprofit space devoted to highlighting the environmental concerns of the area’s sensitive ecosystem and to providing art-in-the-schools programs for West Marin children. And if the notion of worms wiggling across a table of dirt–as conceived by area school children for next fall’s exhibition on sustainable agriculture–is your cup of cylindrical invertebrates, all the better.

Filmmaker Victoria Lewis learned about the work of the gallery after befriending Andrew Romanoff, he of the geraniums and whistle, while working on her 1997 film about his great-uncle, The Mystery of the Last Tsar. Remaining friendly, Romanoff brought Lewis to the 2000 “Box Show” exhibit.

“I’d never seen anything like that,” Lewis confesses by phone from her San Francisco office. “It was mind food to me, and it just hit me so hard. I thought it would be a great premise for a film.” So did PBS, which is assisting her in concept and funding, promising to air the finished product possibly late next year.

A former art-school student whose interest instead veered into film, Lewis is particularly impressed by the concept that “artists can be problem solvers for a community.” She contacted all 120 exhibitors of the 2000 show and interviewed “anyone who would answer the phone,” asking them not only about their boxes but also about their lives. Some 25 artists were then selected for in-depth interviews, agreeing to recreate their 2000-era work for her camera. When the film is finished, she estimates that she’ll have further whittled that number down to six or seven featured artists. “I could do a silent film and the boxes alone would be captivating,” she declares.

Featuring a clay doll on a bed of champagne glasses, her large, red heart dangling ickily from the ceiling, Vickisa’s box is titled When Your Heart Is Being Ripped Out . . . You Need Some Anesthetic. She strives to explain the attraction of “The Box Show.”