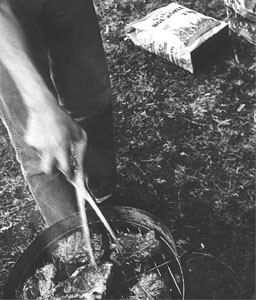 Reflections of a grill grrrl

Is it wise to trust–let alone consume–a food whose recipe reminds: “If you have enough clean cat-food cans, everyone can have a dessert”? Should the word “dump” ever be part of your menu litany? Are gas grills, as has been averred, truly proof that Satan walks this earth? Should that electric cord be so close to that swimming pool? And finally, how long do you cook that lettuce?

These are but a few of the urgent questions being mulled by home barbecuers the world over as the season peels off its last sweater for the bare-shouldered, sweat-laced, smoke-infused shrug that is summer. Out of the kitchens we pour, eager to reconnect with our most primal roots, to hail the ancient story of the Homo sapiens, a genetic history that can be shortly sketched by the sight of one frustrated cook in a humorously decorated apron poking a resistant piece of burned meat over a smoldering, uneven flame.

If your memories match mine, that cook is sometimes called Dad, and the nonpoking hand firmly clutches a gin. If you further share my wispy, WASP-y grasp of yesteryear, you were college-aged before you realized that food could be barbecued without gin. At which point you naturally enough considered: But why would you want to?

(You may also have reeled at the adult knowledge that barbecued chicken isn’t always black. Out of the Garden are we thus all eventually expelled.)

Meat–resistant, burned, gin-drenched, or otherwise–is these days by far the least of our grillable possibilities. Perhaps throwing a few burgers or dogs on the fire is OK for the kids. Perhaps. The last group of youths for whom I performed this mom-magic looked wiltingly down on their plates, shifted uncomfortably, and nudged each other until one politely inquired about marinated portobellos. It was, of course, the last children’s beach party I’ll ever throw without having a hip flask handy.

Nowadays, when preparing to roast outdoor foodstuffs of the burgers-and-dogs variety for adult company, that burger had better be a Boursin inside-out burger with the imported French cheese spooned delicately into a pocket of ground sirloin; that dog must either have some intricate Eastern European lineage or be stuffed full of chicken-basil/dried-tomato/pine-nut plug. And don’t even consider grabbing a bag of that white-flour-bun crap off the shelves. Oiled focaccia rolls infused with rosemary are acceptable, as is seeded artisan sourdough. They may be found at the bakery. If there’s a rainbow anywhere on the packaging, your pot of culinary gold–and indeed your very reputation–is in desperate straits.

Today’s modern barbecuer can purchase shiny new machinery to cook everything from pizza to pasta to baked Alaska to pancakes to fruit to, yep, lettuce–outside, in the elements, over a heat source, just like great-great-great-grandma used to do. Whether GGGGM would embrace such a miracle can’t be fathomed, but as long as there is a perfectly good kitchen inside, running water and all, one imagines her heading straight for the house.

For whereas women may have the vote, men still have the grill–or they at least appear to foot the grill bill. Advertising copy and images for the latest barbecues relentlessly feature a hirsute and apronless midlevel executive manfully standing over skewers ‘n’ steaks by the pool while a blonde woman just past her youth adoringly prepares cold drinks in the background. Mint sprigs, needless to say, abound.

Curiously, fire itself seems to be passé. The Char-Broil company leads the non-ignition pack in introducing an electric model called the Patio Bistro. Smartly sized so that wheelchair-bound folks can easily access it, the Patio Bistro’s ad copy masculinely boasts that it also has a built-in cooler–“Perfect for some cold ones!”

Connected umbilically to your poolside outlets, the PB handily brings all the hassle and mess of full-blown kitchen cookery outside. But unlike that unstable little Hibachi often bestowed on people’s patios, the Patio Bistro also has a large work counter, a dishwasher-safe cutting board, and a temperature gauge to take the usual gin-soaked professionalism out of guessing outdoor cooking times.

The Big Easy, another of Char-Broil’s products, is a large, friendly lug of a ‘cue, appearing to have a smiling face and little chub wings as hood handle and side counters, respectively. This Naw’lins-positive steel-and-ceramic good buddy is replete with a griddle for those barbecued morning pancakes we so crave and has an insert for use in frying foods. How hot do the coals have to be in order to fry foods? One unprofessional opinion: very damned hot. Want some fries with that pancake? Everyone in bathing suits stand back, the grease spits a little.

(An informal survey of the incredibly well-attended barbecuing topic on the online community the Well proves that gas grills are really better left unmentioned. They evidently range from the crappy to the really crappy to the live-with-it sigh of moderately crappy. Makes a person proud of the rust-ravaged Webber stoutly faring in the shed.)

While new-fangled grills can do everything short of producing wedding cakes, there remains a frivolous holiday air to them. No one really wants to wander out in a bathrobe, fire up the barbie, and get that oatmeal going. They’d rather be sitting bleary with GGGGM in the kitchen watching the coffee automatically make itself while the cereal nukes away in the microwave.

But lunch and dinner benefit nicely from the huge technological strides that have been made in the name of heating things up. Many home cooks take pride in pulling at least a portion of every course off the grill for summer guests. Appetizers? Please, have a grilled artichoke with garlicky aioli. Save room for the prosciutto-wrapped shrimp! Salad? Allow me to whip up a vaguely Asian sauce with soy, ginger, sesame oil, white wine, and brown sugar, drizzle a head of firm, clean romaine leaves with it, and baste over low flames for 15 minutes. Pizza? Don’t send out; I’ll smack a pie right on the coals here using a specially perforated heat-resistant pan. Don’t you know, pizza is the new ‘cue.

Dessert? Um, have an apple.

Like breakfast, dessert is that which the new age of barbecuing should neglect but won’t. Traditional stoves, refrigerators, freezers, and pastry shops already do it well enough, never using cleaned cat-food cans or the word “dump” to achieve greatness. But as with so many other misguided American endeavors, dessert is nonetheless broached upon the grill and sometimes even eaten. Those few treats that simply call for grilled apricots or peaches doused in yummy liqueur and topped with ice cream retain their dignity. Those that call for a package of cake mix and cans of pie filling do not.

Taking your cleaned cat-food can, fill the bottom with pie filling goo-stuff to about 3/4 of the rim. Sprinkle cake mix atop it, and dot with butter. Don’t, warns the gastronome who offered this recipe on the Internet, mix them up! Place over hot coals, cover, and bake until golden. Tra-la!–it’s a dump.

On the other hand, some foods are raised to glamorous new levels by being fired up for dessert. Shunned by the incurious when raw for its somewhat sticky, grainy, vaguely sexual connotations, the homely fig is celebrated when barbecued. Whether stuffed with cream cheese or slathered in honey, figs suddenly join a hip elite when hot. So too does pineapple, that ’50s staple of romantic je ne sais quoi.

While most of us enjoy the swift thwack of this fruit fresh, the cooked stuff sadly joins a ham-slab dinner in dim, distasteful, red-eyed-gravy memory. But grill that taste of the tropics with a dab of buttered brown sugar and it suddenly becomes the J.Lo of the plate, dancing saucily on the tongue with just a hint of last night’s steak sluicing the taste buds.

All of which is frankly enough to make one simply long for the plain old pleasures of a burger or dog. Please pass the chipotle plum ketchup.