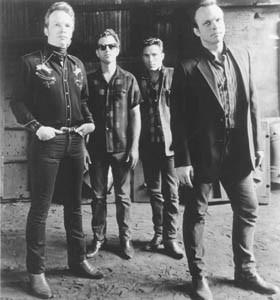 Blast from the Past

To read the mid-’80s rock press, you’d have thought that Dave and Phil Alvin were the Cain and Abel of rock and roll. After a six-year run as primary songwriter and frontman, respectively, for the influential rockabilly band the Blasters–which helped launch the roots-rock movement–the brothers called it quits after a bitter clash that saw the siblings parting ways.

But blood is thicker than ink. Dave, 46, and Phil, 48, are reuniting for the first time in a decade, getting the band back together for a few dates that bring the original Blasters to the Mystic Theatre on March 10.

“My brother and I both had the same musical tastes, for the most part,” explains Dave Alvin during a phone interview from his Los Angeles home. “The problem was, as Bob Dylan sang, we just saw it from a different point of view.”

The tour isn’t exactly a family reunion. Rather, it marks the release of Testament (Rhino), a new two-CD anthology featuring outtakes, rarities, and previously unreleased tracks. While the original band split up in 1985, Phil still performs with a revamped lineup. But for hardcore rock fans, the upcoming reunion–with Dave and Phil Alvin, pianist Gene Taylor, bassist John Bazz, and drummer Bill Bateman–is on the par of a roots-rock Beatles union.

“To me,” says Dave, “the Blasters are those five guys you’re going to see.”

Indeed, the original Blasters played a pivotal role in launching the Americana movement that last week saw the O Brother, Where Art Thou? soundtrack snag Album of the Year honors at the Grammy Awards. But at a time when America’s airwaves were flooded with easy listening, country pop, and arena rock, the Blasters, from 1981-’85, spearheaded a roots-music revival with songs steeped in blues, Cajun, New Orleans R&B, boogie-woogie country, nortenos, and rockabilly, and with lyrics rife with American archetypes.

Along the way, the Blasters got Los Lobos their first Hollywood gigs and their first recording contract, and brought Dwight Yoakam on his first national tour when Yoakam was too country for Nashville.

It all started in Downey, the L.A. suburb that was home to ’70s easy-listening sensations the Carpenters. Downey also was a blue-collar bedroom community for local aerospace drones and Firestone factory workers. But two blocks away from the Alvin household sat a prime-rib joint with a lounge piano player who had been a fixture on the South Central jazz scene 20-years earlier.

The Alvins and their blues-fan pals ate a lot of prime rib that summer, and before long guitarist and singer Phil was auditioning for a spot on a show that featured Big Joe Turner himself. Another buddy, whose mom had been a jazz singer years before, introduced the Alvins to some of her famous house guests, including blues guitarist T-Bone Walker and New Orleans sax great Lee Allen (the Fats Domino sideman who later played with Blasters).

“I was just 13, so I was the guy sitting on the amp, let’s put it that way,” Dave Alvin recalls with a laugh. “But my brother was playing with all those cats.”

The Alvins learned more than licks during those visits. “There has never been anyone like those guys and there never will be, as cliché as that sounds,” Alvin says. “When you’re in the presence of those kind of people, it’s just magical. We knew then that we were blessed to be around those guys. And the best way to honor them is to be yourself.”

Before long, the Blasters–aided at times by Lee Allen and sax player Steve Berlin (a member of Los Lobos)–were burning up stages on L.A.’s burgeoning punk and roots-rock scene, where they shared the bill with such bands as Asleep at the Wheel, Black Flag, the Cramps, the Fabulous Thunderbirds, the Go-Go’s, and X.

An independently produced 1980 album, American Music (Rollin’ Rock), earned the Blasters a recording contract with Slash Records (distributed by Warner Bros.). The self-titled Slash debut, released in 1981, entered the Top 40, got the Blasters on American Bandstand, and put roots music in the mainstream. Two more albums and a live EP followed. But after the death of the Alvins’ mother, creative differences and personal conflicts started to take their toll. The band’s demise came after a gig in Montreal.

“You see, no matter what sort of soap operas or psychodramas we had going backstage, we never let it drift onstage, really,” Alvin explains. “But one night in Montreal, in ’85, it did drift onstage and I tendered my resignation–to use nicer words than I used that night–and I was gone.”

As for the “psychodrama” behind that implosion, Alvin says it extended far beyond sibling rivalry. “Everybody always pegs it on the two brothers, but it was all five of us–we’re all insane,” he says. “I’m mean, you have five guys who went way back, and there’s a lot of old hometown stuff. Everybody knows everybody’s secret spaces and all that.”

After the breakup, the much anticipated solo debuts by Dave and Phil underscored the creative differences. Phil, who had returned to UCLA to finish his doctorate in mathematics, released the eccentric 1986 solo album Un “Sung Stories” (Slash), which featured cameos by members of Sun Ra’s avant-jazz Arkestra and the Dirty Dozen Brass Band. His next and last solo album, County Fair 2000 (Hightone), appeared in 1994 and featured members of the Faultline Syncopators, a trad-jazz band.

Meanwhile, he has chalked up a string of acclaimed folk-based recordings, including King of California and last year’s Public Domain: Songs from the Wild Land.

While his music has evolved since his stint with the Blasters, Alvin waxes nostalgic for those formative years. “I miss those days,” he admits, “because there are times when it’s a Saturday night and someone will say, ‘Hey, let’s go do something,’ and I’ll say, ‘Yeah, let’s go see Big Joe Turner! Oh, we can’t do that.” (Turner died in 1985.)

“It’s one of the reasons that I miss the Blasters in a way,” he continues, “because while there are elements of that music in my solo stuff, the Blasters were pretty darned good at reviving that period.

“I mean, my brother can sing just like Big Joe Turner, when he wants to really turn it on. . . .”