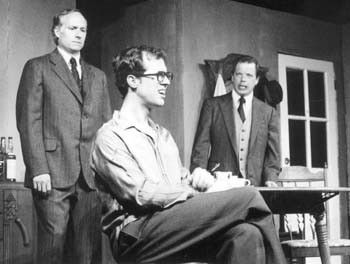 ONCE EMBEDDED in the paws of pedestrian theater pundits, Harold Pinter’s splinters persist on the floorboards of Sonoma County Rep in Sebastopol in its splendid production of his “comedy of menace,” The Birthday Party.

Originally staged in 1958, the play was panned by critics but survived to herald a new era in theater and a 40-year career for its author. It’s not populist theater by any means, and SCR should be lauded for encouraging this much-needed stretch for Sonoma County audiences. If Pinter chucked a monkey wrench into the mundane, director Scott Philips gives it real torque. His production is a taut, lean triumph for local stages.

The guest list includes Lulu (Kori Krehbiel), a dangerously flirty neighbor, as well as the mysterious Goldberg (Eric Thompson) and McCann (Allan Armstrong), who breeze into town on some undisclosed but dubious business with the hapless Stan. This unlikely bunch leads the play to a second-act crescendo of such psychological weirdness that Freud himself would have to lie down on the couch and suck dumbly on his cigar.

McVeigh’s uncanny ability to portray Stan’s emotional poverty while keeping a tenuous hold on his identity is this production’s finest asset. By turns wearied and worried, Stan is on the brink–a condemned man who, without pretense or moralizing, is unable to fully resign himself to his fate with Goldberg and McCann, whatever that may be. This indomitable flicker of humanity, perhaps more an innate survival mechanism than lofty heroism, is brilliantly presented by the actor. Despite himself, Stan resists succumbing, and when he finally does, it is with complete erasure of the self. McVeigh conveys the existential gravity of his character’s fate with only the slightest gesture. It’s his party and he’ll cry if he wants to, damn it.

Peggy Van Patten is also well cast as the intolerably chipper matron. Her zealous dispatching of breakfast cereal and maternal doting on surrogate son Stan proves a comic menace unto itself. Her naiveté is compounded by her cloying determination to make others happy, resulting in further upset and increased efforts to please. Meg’s husband, Petey (William Harrison), proves the perfect understated foil for the bombastic hostess.

Emissaries from Stan’s dark past, Goldberg and McCann are like bullying orderlies sans the white coats. In the actors’ hands, the gruesome twosome are a sort of revved-up Kray Brothers endowed with a flair for semantics. Thompson proves a particularly agile performer during the play’s signature interrogation sequence when his face literally changes color in synch with his various emotions.

Indeed, this truly eerie scene is a good example of what makes this production of The Birthday Party so special–a happy conflux of great material and estimable local talents. Party on.