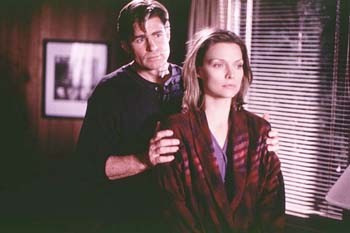 H2O: Treat Williams and Michelle Pfeiffer star in The Deep End of the Ocean.

Writer David Templeton takes interesting people to interesting movies in his ongoing quest for the ultimate post-film conversation. This column is not a movie review; rather, it’s a freewheeling exploration of art, alternative ideas, and popular culture.

IF THE DEEP END of the Ocean makes any money at all,” professes author Michael Chabon, sliding into a battered wooden chair at a bustling coffeehouse in downtown Berkeley, “it will only be because of Michelle Pfeiffer.

“That,” he adds quickly, “and because the idea of the movie is so compelling.”

Indeed. In Deep End of the Ocean–adapted from the widely read novel by Jacquelyn Mitchard–Pfeiffer plays a middle-class mother of three picture-perfect children. When her 3-year-old son is snatched from a crowded hotel lobby–not to be seen again for nine years–the mother all but loses her mind under the weight of grief, depression, and guilt. The patiently simmering father is played by Treat Williams, and Whoopi Goldberg shows up from time to time as a tough-talking, lesbian detective/grief counselor.

Tragically, this all sounds far more compelling than it is; somehow the filmmakers (led by the usually excellent director Ulu Grosbard and screenwriter Steven Schiff, a former Vanity Fair film critic) have so flattened and muffled their subject that they’ve ended up with a subdued, sappy, frequently boring film that constantly seems to be examining the least interesting, most mundane aspects of its own story. Worst of all, they’ve hosed away most of the disturbing ironies that made the book’s second half so provocative.

Which brings us to Michael Chabon, quite possibly our reigning modern master of “disturbing ironies.” With Mysteries of Pittsburgh and Wonder Boys, the critically acclaimed author has made a career of writing tales that are the full reverse of “mundane” and “uninteresting.” His characters, often troubled, usually endearing, come fully marinated in an eloquent sauce of idiosyncratic quirkiness. In his latest, Werewolves in Their Youth, Chabon has assembled nine astonishing short stories that work like literary appetizers, instilling a hunger for more of the same.

I recommend the main-course theatrics of Wonder Boys (one of my favorite books of the 1990s), a novel about bad timing, artistic failure, and a very strange case of writer’s block. We’ll soon see if Hollywood can pass the Irony Test when it attempts to transform Wonder Boys‘ “screwball tragedy” into a big-screen treat; the film version of Chabon’s book–starring Michael Douglas–is currently filming and will be released next year.

“I’m excited about it,” Chabon admits, somewhat sheepishly. “In spite of how I tend to feel about Hollywood movies, I do have high hopes for Wonder Boys.”

Chabon stops a moment to chat with a student–he’s teaching a writing class this semester at St. Mary’s College in Berkeley–then turns his attention back to The Deep End of the Ocean.

“I have to say, as the parent of two children,” he muses, “even though I was resisting the movie almost from the start–mainly because it wasn’t very good–I still couldn’t help but be upset when the kid disappeared.

“It’s impossible not to start thinking, ‘Oh my God, I’ve done that a million times with my own kid; I’ve been in some crowded place and I’ve looked away for one second.’ That’s a real nightmare. And it hasn’t been dramatized all that many times in movies. It’s really a relatively recent thing, isn’t it, all these missing children? Isn’t it only in the last 20 years or so, that kids’ faces have been turning up on milk cartons?”

TRY 14 YEARS. According to the National Center for Missing Children, the first public-service announcement featuring the photo of a missing child appeared Jan. 1, 1985, part of an experimental campaign sponsored by Melody Farms of Illinois.

“Still, it’s hard to remember a time when there weren’t faces on milk cartons,” I admit.

“It’s pretty sad,” Chabon nods. “It’s sad that those faces on milk cartons have become such an ingrained part of our culture. Again, as a parent, it’s a frightening thought. The whole subject of missing children is such a visceral one. It’s instantly kind of chilling just to think about.

“Which goes back to what amazes me about the movie,” he adds. “That they could blunt a story as powerful as this to the degree that they blunted it. It could have been great, but in the end it’s just another bad movie.”

“Doesn’t it bother you that bad art can become so popular?” I want to know. “Most of the New York Times bestsellers are pulp. Even with movies. Patch Adams was awful, but it made a fortune. Armageddon made a fortune. And Deep End of the Ocean will probably make money, too.” (On this point, it turns out, I’m dead wrong; at the box office, Deep End has been sinking like a brick.)

“Well, I suppose it does bother me that bad art is so eagerly embraced by the public,” Chabon allows. “But still, there are plenty of people out there who are buying and reading really good books, people who are going to the movies to see quality films. It’s just that there are no New York Times bestseller lists devoted to those specific people.”

“There’s a common theory among us culture snobs,” I say, “that this would be a better world if we all had higher tastes, if shows like Hollywood Squares featured brilliant writers instead of sitcom stars. As a culture, wouldn’t we be better people if we all read better books?”

“The ironic thing,” he concludes, with a smile, “is that most writers are very boring people.”