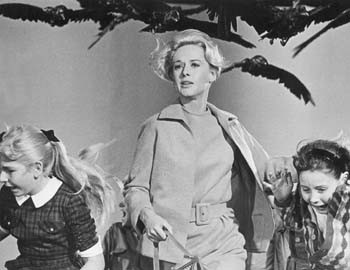 Bad hair day: Tippi Hedren’s terror pales in comparison to the anguish unleashed by a group of Petaluma teens on the unsuspecting audience that attended the 1963 premiere of The Birds.

Thirty-five years ago this month, famed director Alfred Hitchcock released the film The Birds. Petaluma political cartoonist Richard Benbrook, then 13, recalls the night he and his friends pulled a bold prank at the film’s opening. This is excerpted from a longer essay entitled “Dirty Copper.”

FOR ME AND MY PALS, the 1960s began without a hint of how they would conclude. The decade that was to end with long hair, paisley prints, great dope, and willing girls with flowers in their hair started out with a shitty-looking sneer and a cigarette clinched in its teeth.

Every guy I knew wanted to be bad in 1962 … . Some of us–like my chum Ralph, who had a passion for James Cagney movies–were more successful than others.

That year, a major motion picture company from Hollywood came to our then-small town of Petaluma to make a film, creating an incredible stir. The director was Alfred Hitchcock and the movie was The Birds, a horror film about birds viciously turning against humanity. The primary location for the shoot was the tiny coastal village of Bodega Bay, but many of the cast and crew lodged in and around Petaluma. An air of hysteria surrounded the event. Everything written was either “birds this” or “birds that.” I remember learned professors on local radio and TV expounding on whether such a terrifying event might actually occur in the natural world.

The notion of birds being objects of fear seemed stupid, but it didn’t stop us from cutting school and hitching out to Bodega Bay on several occasions to watch the proceedings. We got to see Hitchcock direct his star, Tippi Hedren, in several scenes. I remember a lot of fake blood and thousands of stuffed, inanimate birds perched on buildings and telephone wires. It was a boring, time-consuming process to watch and we were disappointed.

Our last trip there was made memorable only by the fact we were kicked off the set. During a lunch break for the crew, Ralph, realizing that no one was around, decided to throw a rock at a big stuffed raven on a fence post. Naturally, it sparked a competitive thing with the rest of us and soon we were all firing away at the target.

When the security guard who collared us began questioning why we weren’t in school, I decided it was a good time to leave. I apologized and said something brilliant like, “We didn’t know it was one of his birds.” Despite the smooth line, it was difficult to snow the guy, with Ralph snarling and spitting curses in the background. We headed home that afternoon gladly putting Bodega Bay and its phony birds behind us for good–or so we thought.

Many months passed before a second wave of hysteria concerning the movie struck. The big news was that the film was finally complete and there was to be a grand premiere in Petaluma. Our city government was rolling out the red carpet for the celebrities and other movie bigwigs who would be in attendance. Everyone who was anyone in our community would be there. The town was abuzz–it was a bona fide happening.

But dark forces were afoot in our little town. Some high school boys, a bit older than us, had the inspired idea of smuggling live birds into the theater on the big night. Their plan was to strategically release them during the moment in the movie when the birds attacked the villagers. In order to work well, the stunt would require many volunteers.

Ralph and I each met the stiff criteria to qualify: possession of a coat; a ticket to the premiere; and an incredible lack of intelligence.

We met the older boys in their pickup truck several blocks from the theater on the night of the premiere. The searchlights were visible in the distance, swaying back and forth in the evening sky. The ringleaders were farmboys and they had sacks of doves and pigeons in the bed of the truck. All of us were really nervous. I’m sure, that like myself, many of the volunteers had never held a live bird before.

The one I was issued felt strangely lightweight and fragile, and I was afraid I might break its bones. It kept trying to peck me until I finally got a crude grip on it and stuffed it inside my jacket. Ralph seemed uncharacteristically subdued throughout. I don’t think he had ever held a bird before either.

He and I were the first two conspirators to make the dangerous passage through the brilliantly lit ticket booth and lobby. A large crowd milled about and all the hubbub worked to our advantage. I was both relieved and amazed when we successfully smuggled our birds inside undetected. We hurried to our seats and scanned the audience for fellow partners in crime as they arrived after us.

The air was electric, everything was going to plan.

Up in the balcony sat the cluster of VIPs with their smug smiles and shiny heads, nobly gazing down upon their minions. I was experiencing a smug satisfaction myself in the knowledge that I knew something they didn’t. It fueled my resolve. I felt a stealthy sense of mission and destiny–I felt like John Wilkes Booth.

Unfortunately, there was a glitch in our plan–a major one. Alfred Hitchcock hadn’t provided any of us with the script to his movie, so we had no way of knowing that the inane plot would drag on for an eternity without any major bird attacks. After a while things started coming unwound. Sporadic disturbances began occurring in the audience, some murmurings in one area, then a woman’s shriek in another, followed by the sound of flapping wings.

Men with flashlights appeared, escorted several individuals out, then suspiciously prowled the aisles and shined little penlights on various suspects. I feared if they did this to Ralph he might react and blow our mission. I was also concerned that my pigeon might have died, as it had not wriggled for a long time.

But finally, after what seemed like an eternity, Alfred Hitchcock came through for us–a massive bird attack commenced on screen. In unison, Ralph and I stood and threw our pigeons skyward into the flickering beam of projector light. Dozens of other conspirators must have done the same because the theater suddenly seemed as thick with birds as did the celluloid skies of Bodega Bay. People were screaming–some in terror, some in anger. There was a dazzling three-dimensional quality to it all.

On screen, a vicious seagull pecked at Tippi Hedren’s beehive hairdo, while in the theater a woman with the exact same hair style ran screaming up the aisle with a terrified pigeon tangled in hers.

The houselights came up and people began pointing out the culprits to the authorities. Ralph and I were quickly fingered. We, along with our cohorts, were taken to the lobby, where the cops made us each hold our jackets open for inspection.

Good, small-town detective work. Inside the linings of our coats was ample evidence to send us all up the river.

SOMETIMES wonderful things happen in unexpected situations–epiphanies, if you will. It may have been the fantastic merging of the movie with our own reality that night; even the bird theme resonated strongly, as Petaluma’s sole claim to fame until then had been for chicken and egg production. But whatever it was, all the dots connected in my mind at that moment, and the completed circuit somehow illuminated the totality.

For the first time I saw the world on a much broader, more transcendent plane.

I looked over at Ralph in this entirely new light and he was glorious. I saw his rage, his beautiful rage, for what it essentially was–heroic defiance. Ralph instinctively knew that these small-town cops were in truth agents of some vaster, more menacing force that fed on the likes of us much in the same way Hitchcock’s birds fed on the villagers.

And he was right. It was another hand of this same power that would a few years later draft him into its military and send him off to a senseless war where he would die. But that was to be later.

But at that moment, on that wonderful night in Petaluma when everything converged and searchlights lit the sky, Ralph was wondrously fierce. Looking back now across the decades, I can view his defiance and courage like an unheeded bellwether for our generation, at once comic, tragic, and sublime. “Look, Copper,” I will forever remember him snarling directly into that big policeman’s face, “you can’t pin this chickenshit rap on me!”