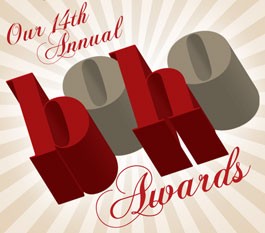 Applause is a funny thing. No one can be positive how the practice started, but somewhere in our evolution, standing up in unison and beating our palms together to create a sound became the go-to method for saying “good job.” Is it an instinctive action in humans, or was it an intentional creation? We’ll never know.

Applause is also usually directed at the star of the show, when, let’s face it, the star oftentimes does very little in relation to the stage manager, the promoter, the sound engineer, the guy who sweeps up afterward. Where is the applause for these people? Like teachers and plumbers, they finish their job and are left with gales of silence, forced to be content with a job well done.

The Boho Awards serves as their applause. For 14 years now, these awards have honored those who’ve made significant contributions to the arts in the North Bay. Most of the honorees are behind-the-scenes individuals or organizations responsible for bringing the inspiration and and passion of the arts into a public arena, whose sole satisfaction is standing in the wings and knowing they helped create someone else’s shining moment.

This year, we pull these people out of the wings and give them their curtain call. People like Robin Pressman, who as program director of the North Bay’s most robust public radio station brings news, music and arts over the airwaves on KRCB-FM; people like Donna Seager, whose keen eye has brought untold artists, and in particular book artists, into the public eye; people like Paul and Leilani Slack who constructively create opportunities for young musicians and emerging artists in the adult-oriented city of Napa; people like Gary and Linda McLaughlin of Russian River Chamber Music, who have incredibly been presenting free classical performances for 20 years; and finally, the many people behind the Sonoma County Book Festival, which puts focus annually and squarely on the literary arts.

All of this applause, of course, is long overdue. Without further ado, it’s time to stand up and cheer.

The Game Gets Old