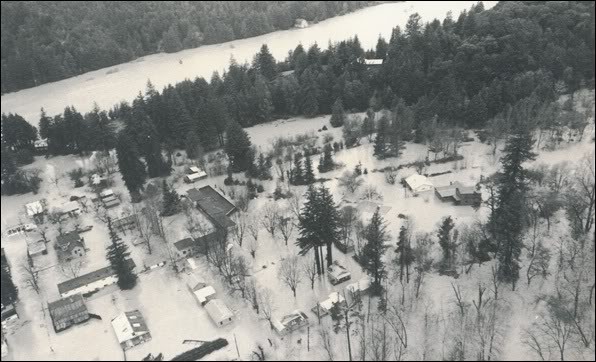 Longtime locals remember it all too well.

In February of 1986, the storm would just not stop, dropping 24 inches of rain over a 10-day period. The overflowing Russian River reached a record high water level of 49′ 1″ at the Guerneville Bridge, submerging the entire town and changing lives forever.Out of a house in Guerneville, a small-town publication called The Paper covered the flood, its damage, and its aftermath. The Paper would eventually turn into the Sonoma County Independent, and then the North Bay Bohemian, but the photos and reports from the flood remain in our archives, just as clear—or sometimes clearer—than the many memories still shared about that wet, wet week.

On the 25th Anniversary of what’s commonly known as “The Great Valentine’s Day Flood of 1986,” we here at the Bohemian have decided to dip into those archives and share some memories of the tragedy, resolve and eventual triumph that Guerneville and its surrounding areas underwent in 1986.

Over the next week, we’ll be posting dozens of flood photos from our files. Some of them have captions. Many do not. What we’re looking for from you, the longtime local—to whom the very word “sandbags” evokes images of torrential downpour—is your stories.

Who are the people in these photos? Whatever became of them? How did they persevere? What is that building in the background? Who are those kids, and what did they grow up to become? Whose Volkswagen bus is that?

Please tell us in the comments of each photo. Tell us your stories. Your memories.We’ll start with this one:
Judging by the address, this might be somewhere on Old River Road, near what’s now the Stumptown Brewery. According to cut-and-paste captions strewn in the files, the man in the car might be Fred Twers, or else Andy Fava, who owned the Guerneville Inn. Does anyone have any ideas? Please let us know in the comments below.

At the end of the week, we’ll compile our photos and your stories into a special feature. In the meantime, keep checking back to our BohoBlog to see more Guerneville Flood photos from 25 years ago.