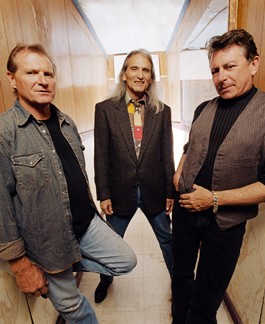 If there was such a thing as a “supergroup” of west Texas singer-songwriters, the Flatlanders would have to be it. Between them, Jimmie Dale Gilmore, Joe Ely and Butch Hancock have written hundreds of songs and released more than 40 albums, often featuring one another’s songs, among them such modern country classics as Gilmore’s “Dallas,” Ely’s “Honky Tonk Masquerade” and Hancock’s “West Texas Waltz.”

All three hail from Lubbock, where music was a common bond as far back as seventh grade. “We all were affected by everything we were hearing at the time—things coming in over the horizon on the border radio, all the old blues guys,” Hancock recounts thoughtfully by phone from his Texas home near Terlingua. “It just opened up really infinite possibilities for music.”

Their very first recordings, featuring just Gilmore and Ely, were legendarily initiated by Buddy Holly’s father, but those tapes promptly disappeared. The 1972 debut album from all three Flatlanders fared little better; it was released only as an 8-track tape by a minor southern label, with a limited vinyl pressing in England. (It was eventually reissued on CD in 1990.)

After that, “we all kinda lost heart about the music business and all took off on separate paths,” Hancock recalls, “but we still stayed pretty much in touch.”

“I think it was around 2000 that the Robert Redford folks got in touch with us through Joe and were wondering if the Flatlanders could do a song for that Horse Whisperer movie,” Hancock says.

They could, they did, and that was just the beginning.

“We sat down and wrote three songs and had such a good time doin’ it that we got together in another few months and wrote another batch of ’em, and just kept writin’,” Hancock continues, warming to the tale. “Somewhere along about that same time we did a performance in Central Park in New York. Actually, we were booked in there as three separate acts and we did a little jam session at the end and they called it the big reunion of the Flatlanders,” he chuckles. “Suddenly, we started getting some calls for pretty good bookings around the country, so we decided to put a tour together.”

The reception was rapturous, and an album, Now Again, soon followed. A second new recording, Wheels of Fortune, appeared just two years later, in 2004, and the trio has just released their third new team effort, Hills and Valleys.

“This last album, I think the character of the songs was a pretty deep felt reflection of the times we’re going through,” Hancock muses. “Homeland Refugee,” the powerful opening track, offers unsentimental scenes of defeated families returning to their roots.

“Joe describes it as ‘a reverse migration, from California to the dust bowl,'” Hancock offers.

Like most of the Flatlanders’ material, the new songs are the product of a three-way collaboration that remains slightly mysterious even to its participants. “We bring in rhythms and ideas and things we’ve collected from our travels and when we get back together. Some people have called it the process of osmosis—it just sort of bubbles through,” Hancock marvels. “All the ways in which you can write songs, I think we’ve probably tried a pretty good percentage of ’em.”

Regardless of the actual process, “What we’re really tryin’ to do is uncover those songs, to discover what the songs want to do,” he continues. “We’ve always noticed that the real job of the artist is to get out of the way of the art. Of course you’ve got to use what knowledge you’ve accumulated of the craft, the practical side of puttin’ together songs. But the real thing about the song that comes through is . . .” Hancock trails off.

“I’ve heard a lot of theories about songwriting, and frankly I don’t believe any of ’em,” he concludes. “Even the ones I’ve come up with.”