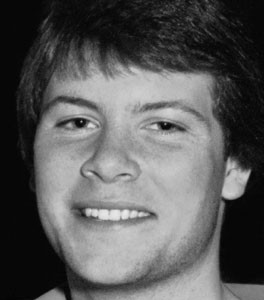 “I remember how beautiful women would sometimes look at me,” Terry Healey says, his voice softening. “Our eyes would meet, and I’d know she was attracted to me. But then, after the operation, I’d see all these pretty women staring at me, and I’d know it was out of shock or disgust. Same action, completely different idea.

Healey, 37, has many memories of what it was like to be good-looking and popular. In high school, he was elected Homecoming Prince, and he was president of his fraternity at UC Berkeley. With plenty of friends, a loving family, good grades, and endless potential “life was pretty simple,” he recalls.

Then, at age 20, Healey discovered what appeared to be a pimple growing by his right nostril. After finally getting it checked, he was stunned to learn it was a tumor.

“But I was too young to take it that seriously. I was strong and healthy, and I had never been really sick before,” says Healey, who reads from his recently published memoir, At Face Value: My Struggle with a Disfiguring Cancer (Xlibris; $21.99), on Feb. 7 at Book Passage.

The operation to remove the tumor was minor, and Healey returned to college thinking his battle with cancer was over. But six months later, while horsing around with his frat brothers, Healey got a bloody nose. He checked himself in the mirror, and his stomach cramped in panic when he saw the lump inside his nostril.

This time the tumor was larger and the operation more extensive. When he awoke from surgery, Healey discovered that half his nose and upper lip had been removed. The bone and muscles had been extracted from his right cheek, allowing that part of his face to sink in. The shelf of his right eye had been removed, causing the eye to droop. Six teeth and part of his hard palate were gone.

As difficult as it was to see his new face, that experience wasn’t as devastating as what awaited him after his discharge from the hospital. “My mother and brother went to get the car, so I sat down in the waiting room by myself, ” Healey recalls. “I looked up, and it seemed like everyone was staring at me.”

Kids pointed, some laughed. People stopped dead in their tracks, mouths agape, staring. “I felt like the Elephant Man,” Healey says. “But I told myself things would get better soon.”

They didn’t. When Healey rode BART to work, teenage girls would stand in a circle giggling and peeking over at him. In bars, grown men would yell, “What the hell happened to you?” A fraternity brother told the other guys in the house that if he had been Healey, he would have either stayed hidden in a closet or just killed himself.

“People can be pretty cruel,” Healey says. “Their actions leave a mark on your psyche. Little by little you start thinking, ‘I’m a freak,’ and that just feeds on itself. You carry yourself differently. You cower. And then, people treat you differently because you act that way.”

At Face Value describes Healey’s transformation from a cowering, self-described “freak” to a confident, self-assured man. That transformation began when he started viewing his facial deformity as a blessing in disguise. “In a weird way, I’m proud of my battle scars,” he says. “They are what has brought me wisdom. I’ve become much more sensitive, and I try not to be judgmental. I’m a better person now than I was before the cancer.”

This transformation began around the time a beautiful girl fell for Healey–and then dumped him. ” She was smart and full of energy and absolutely gorgeous,” Healey says. “And she wanted to be with me. I figured if a girl like this could like me, it can’t be that bad.

“But then,” he continues, “after I asked for the millionth time how she felt about my looks, she told me that my problem wasn’t physical, it was mental. I was just too insecure, and she couldn’t deal with it. So she broke up with me. It was devastating, but also eye-opening and liberating. I thought, ‘This is great! It’s not my looks that are the problem–it’s me!’ I mean, there was nothing I could do about my looks. But me–that’s something I could work with.”