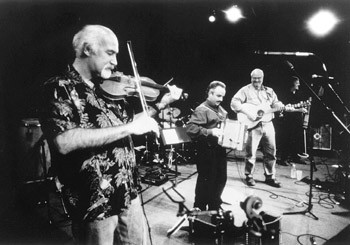 Born on the Bayou

Their name is derived from a spiritual term describing the Acadian promised land. Yet the soft-spoken Michael Doucet–fiddler, songwriter, and leader of the influential band Beausoleil, Louisiana’s leading ambassadors of Cajun music–recalls a time not so long ago when it wasn’t cool to be Cajun. “The moment you even mentioned Cajun, you were put down for the way you spoke or criticized because the music was out of tune or the food wasn’t sophisticated enough,” he says.

Tired of being put down, Doucet in 1969 started delving seriously into the music and folklore of Louisiana’s French-speaking Cajun culture. “Certainly my family–which is French Acadian on both sides–are a very proud, fair, and honest people,” he adds. “I felt it was time to right the wrong.”

In the twenty-five years since the release of the band’s first U.S. album, The Spirit of Cajun Music (Swallow), Beausoleil has spread the infectious joy of the Cajun sound, spearheaded a Cajun cultural revival (most notably through the best-selling soundtracks for Belizaire the Cajun and The Big Easy), garnered three Grammy nominations, and remained in the forefront of a commercial renaissance that has made it very cool to be Cajun.

The band’s most recent album, Looking Back Tomorrow: Beausoleil Live! (Rhino), captures the remarkable verve of this Southern regional phenomenon on its first concert recording. Beausoleil perform Feb. 9 at the Mystic Theatre in Petaluma.

The band’s music flows easily from traditional Cajun waltzes and reels to blistering “gombo” music (a cross between gumbo, the spicy, Southern mishmash stew of seafood or chicken, and gonzo, the term coined by journalist Hunter S. Thompson meaning bizarre, crazy, or eccentric). It’s a schizophrenic style that sometimes has brought scorn from purists who complain that the band has drifted too far from its French Acadian roots.

“I sure hope we’re schizophrenic,” Doucet, 50, quips with a laugh when asked about the band’s delicate balancing act between the traditional and progressive musical camps.

“The French Acadian society [in Louisiana] was basically a very isolated, agrarian society that kept its values for more than 300 years and was thrown abruptly into the 20th century via construction of roads and bridges and the introduction of TV and radio,” he says. “So if our music is schizophrenic, it’s time-traveling schizophrenia, because we can play a song from the 14th century and follow it with a new composition that incorporates those influences that have affected the region.

“I think it’s very important to get across that it’s a very diverse culture.”