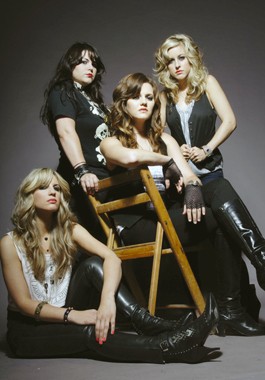 Is there life for the Donnas after 30?

Since their rambunctious beginnings as the only all-girl band in a sea of testosterone at a Palo Alto middle school, skintight jeans, partying and cruising for boys have been regular song fodder for punk-turned-rock-darlings the Donnas. So what’s a party band to do when three out of four members hit the big three-o, and the days of youth start to slip away? In the case of the Donnas, the solution is to put out a greatest hits album, one that culls from their 16-year span of albums on Lookout! Records, Atlantic and their own Purple Feather label.

The Donnas Greatest Hits, Vol. 16 contains a mix of new songs and B-sides from their self-released 2007 album Bitchin.’ The band also decided to re-record five tracks from their 1998&–2001 Lookout! catalogue, and have included original recordings that didn’t make it on to their first release.

“We wanted to make them sound better. Those old versions we recorded in someone’s living room and at Mail Boxes Etc.,” says bassist Maya Ford, on the phone from her home in Los Angeles. “We recorded them really fast, and they’re really crappy sounding. We wanted the songs to sound like how they sound live now.

“Some of them we hadn’t played in forever, like ‘High School Yum Yum,'” Ford continues, “Trying to record them, I was like, ‘Aah, this is so fast! My hand hurts! I can’t play it.’ But then I would do it in two takes and it was fine. I was worried about nothing.”

The Donnas are remarkable for many reasons, including their longevity as a cohesive unit. Formed in 1993 when the members were just 13 years old, the Donnas have outlasted other groups like Bikini Kill, Sleater-Kinney and L7 that rose to minor fame during in the ’90s.

Ford claims that the key to their success revolves around the closeness of the band members. “We’re really good friends. Since we started when we were so young, we got to live with our parents for a while and not have to worry about paying rent,” says Ford. “I don’t know, we just somehow got away with it. We never made tons and tons of money, but we keep going and it works.”

In the beginning, the Donnas’ brand of brash, fast-paced, three-chord songs about hating high school and liking boys was reminiscent of a pubescent Ramones, but after graduating from high school, they embraced an increasingly glam/hard rock sound. While this jump into the cock-rock arena inhabited by heroes Judas Priest and Mötley Crüe (they whip out a faithful cover of “Too Fast for Love” on occasion) has been criticized by some, the Donnas inspire a particularly rabid brand of fan, aka “Donnaholics,” turning live shows into an sweat-drenched, old-fashioned rock and roll party.

“They are very enthusiastic. They come from all over the place. We had a fan club show in the desert, outside of Palm Springs, and people came from Russia, Australia, England—like, everywhere,” Ford says.

“It feels really crazy, when everyone wants your autograph and gives you presents. You kind of don’t believe it’s happening,” she continues. “Some people get really emotional or shy and nervous, and you kind of feel for them, because you remember when you met your favorite band and how they treated you. So you wanna, like, try and be nice to them. You know, you can shake my hand and we can talk for a second. I’m not a monster.”

Highlights of being a Donna include the chance to head-butt Ray Liotta after playing Saturday Night Live and touring Australia as part of the Big Day Out, an experience so wild that Ford got tattooed in commemoration. While the band hits the Mystic Theatre as the headliner on July 23, they are excited about a set of late summer tour dates opening for ’80s legends Pat Benatar and Blondie. Does Ford hope the Donnas will continue to burn up the stage after hitting 50, like their iconic tour mate Debbie Harry?

“Why not?” she shrugs. “There’s nothing you can do that is like this, so I don’t see why we wouldn’t be.”