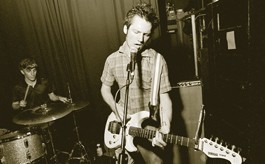 Tear the Roof Off

Modest Mouse and the eviction party of legend

It’s an honor that puts a knowing smile on the faces of a few longtime fans. Before topping this impressive heap, before the Grammy nominations, before recruiting Johnny Marr and before debuting at No. 1 on the Billboard charts, Modest Mouse were just a scruffy little band that played a completely reckless party at a tiny duplex in Santa Rosa. It was a night of flowing libations, irritated cops, angry neighbors and loud, loud bands. In fact, Modest Mouse were so loud, and the party so out of control, that the landlord showed up the next day to deliver an eviction notice. Everyone says it was worth it.

In 1996, supporting their just-released debut album, This Is a Long Drive for Someone with Nothing to Think About, Modest Mouse were a relatively unknown trio with a few holes in their touring schedule. After a club date in San Francisco with no show booked the next night, the band were begged by earnest fans Matt Carrillo and Mike Cassanova—who didn’t have the foggiest idea where the band would play—to come up to Santa Rosa.

“They were like, ‘Fuck yeah!'” remembers Carrillo, who says that after being invited back to the band’s van to toss back a few beers, a plan was hatched. Modest Mouse would play at Cassanova’s house on Orchard Street the very next night.With no time to flyer, the guys woke up the next morning and started calling everyone they knew. Modest Mouse showed up at the duplex and swiftly received a tour of the corner liquor store, filling the remaining hours before the party by recording some impromptu songs together on a four-track recorder (Carrillo still has the cassette somewhere). Carrillo’s band, Edaline, played first that night. Who played second? Nobody can remember, and nobody seems to care.

“What I distinctly remember is flashlights rapping on the windows,” says partygoer Kevin Buchholz, “which was pretty freaky.” Everyone knew it was the cops, but the band kept playing—turning it up, even—and no one answered the door at first. Buchholz was filming the show and still has grainy footage of what happened next: police officers detaining, arresting and pepper-spraying many of his friends. Scuffles poured out onto the street. Someone called 911. The party, needless to say, was over.The next morning, the groggy tenants of the duplex were roused by another loud knock on the door. The final straw, the landlord said. Everyone’s out in 30 days. Modest Mouse had officially caused an eviction.

Years later, Buchholz would run into Brock in Chicago, and Brock’s eyes lit up at the mention of that insane night on Orchard Street. “Isaac, with his lisp, you know, was like, ‘That iss one of the besst sshows we ever played’,” says Buchholz. “That night was legendary, it was emotional, it was all over the place. They just tore the roof off.”