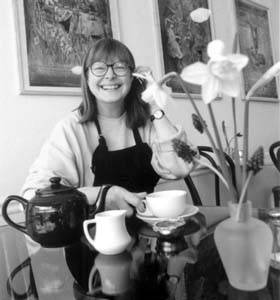 Reading the leaves: Maggie Roth, proprietor of the Tea Room Cafe in Petaluma, has created a welcome alternative to the local java scene.

A brief history of tea leads us strangely to Petaluma

ON A BALMY DAY in 2737 B.C., Chinese Emperor Shen Nung relaxed under a tree while his servant boiled drinking water. A leaf floated idly down into the steaming liquid, a fragrant scent wafted up, and a pleasant stain seeped throughout. A fearless herbalist, Shen Nung took a sip. With unknowing understatement, he declared it good.

It was year five of the seven sleepless years of contemplation on the Buddha. Bodhidharma, the founder of Zen Buddhism, was seated beneath a tree. With two alarming years yet to go, he began to feel drowsy. He reached up and plucked a smooth, green, camellialike leaf, intending to chew it for distraction. Not only was he pleasantly diverted, but the caffeine inherent in the leaf made two wide-eyed years fly by.

Or so they say.

Whatever the story, the topic is tea. Honored through ceremony, sipped for health, served high, low, and creamed, tea is also responsible for insurrection, unrest, one very wet party, and the explosion of the British shipping and porcelain industries. Many cultures seem to have been built on tea’s watery back, and from culture flows custom.

Replacing gin and whiskey as England’s favored drink, tea as a custom inadvertently aided the early rise of feminism by creating that den of suffragist plotting: the tearoom. A place where a woman could go by herself without male supervision, have a warm drink, a small cucumber sandwich, and perhaps just one slice of strawberry cake. Quietly. Alone. Or, even better–with friends, in a relaxed setting where just for that once she didn’t have to slice the damn cucumbers, bake the damn cake, or do the damn dishes herself.

Because someone very much like Maggie Roth would do it for her. Not that the soft-spoken Roth resembles anyone’s maiden aunt. Nor does she favor the simple black frock and stiff starched pinafore of early tearoom purveyors. As for the dishes, well, on one recent visit it was Roth’s husband, local artist David Best, who donned the rubber apron and bused cold teapots and the odd muffin crust from the tables of her simply named Tea Room Cafe.

But she did open the place.

“I grew up with tea every afternoon. It was something that my mom did with all of us, serve us tea with cinnamon toast–just something that simple after school,” says Roth, seated outside her popular 7-week-old Petaluma establishment. Drinking tea in Ireland is nice too, as Roth has discovered over years of visiting and owning a cottage there. Her parents spend half of each year in a home they purchased 37 years ago near Tipperary.

Opening the favored Bluestone Main, an upscale garden and gift store in Petaluma, 11 years ago, Roth–who sold the store in 1997–is no neophyte when it comes to serving the public. As with Bluestone Main, the Tea Room Cafe has the rural sophistication that is Roth’s signature. Her husband’s work adorns the walls, old Texaco signs have been re-upholstered with glass to spell TEA along the wainscoting, and air, light, and white are the keys.

In short, it’s the kitchen most of us don’t have.

YET Roth’s restaurant experience is limited to ordering a meal and asking for the check. “Basically, I wanted a tearoom, but I inherited a breakfast/ lunch place. It’s more than I expected or wanted, but it’s been fun,” she admits with a shrug.

Inheriting the chef doesn’t hurt, either.

Cathy Fox, who cooks and helps Roth devise the menus, figure the pricing, and portion the servings, has worked on and off at the Tea Room Cafe’s site for the past 18 years, through three different businesses, including Markey’s Cafe. “They just add $500 to the lease price for me,” she jokes merrily, serving an outdoor breakfast.

“I’m basically winging it,” Roth admits. “I haven’t come from any training. I love to cook, and I’ve done catering and everybody has helped me. I don’t know if there is any real science–well, I know there is, but I don’t know it.”

Other than science, what has been the biggest surprise of Roth’s new venture?

“The food,” she bursts out with a laugh. “In retail, you buy something for $1 and stick it on the shelf for $2. It looks good, you check it every once in a while, hopefully it sells. When you buy an onion–you have to chop it, you have to cook it, you have to wash the plates. There’s just this constant movement of work going on.”

Ah, yes. But as Bodhidharma himself might have remarked, it’s lovely to turn over a new leaf.