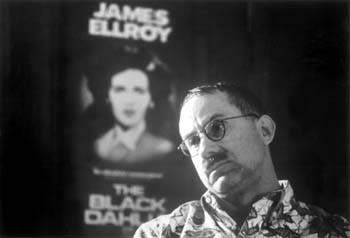 ANYONE WHO’S READ the work of James Ellroy already knows that the author labors under the mighty weight of certain psychological peculiarities. While book groups argue antically about whether Ellroy is truly psychotic or merely staving off said psychosis by writing his hard-boiled award-winning novels (L.A. Confidential, The Black Dahlia), the fact is that it doesn’t really matter–because we wouldn’t have him any other way.

True, there are certain timid readers out there who find the imposing Mr. Ellroy to be boiled a little too hard for their tastes. But the rest of us love the machine-gun hyperbole of his prose, the perversely graphic accuracy of his crime-scene descriptions, and the wild-eyed, glowering intensity of his ever-unpredictable exhibitionism. He seems to revel in shocking talk-show hosts and dropping cheerful bon mots about his lingering sexual obsession with his own murdered mother.

The truth is, as good a writer as Ellroy may be–and in the murky, quirky world of crime fiction this guy is second to none–he’s almost too big a personality to stay confined to the printed page. He seems to want to burst into our houses and take us all hostage, alternatively thrilling us with the eccentric, excessive poetry of his thoughts while frightening the hell out of us with his mere presence.

Which is more or less exactly what he does as the central figure in James Ellroy: Demon Dog of American Crime Fiction, the magnificent 1993 Austrian documentary by Reinhard Jud, playing April 16 and 17 at the Sonoma Film Institute. This is not some objective literary exposé; this is a guided tour through Ellroy’s happily sick and twisted mental mindscape, here represented by the streets and alleys of Los Angeles, the City of Dark Angels, and the author’s much beloved, equally hated hometown. Acting as tour guide, Ellroy drives up and down the avenues of L.A. in his big convertible with the top down, pointing out the scenes of notable crimes, expelling an amazing torrent of entertaining descriptions, while tossing in a spate of unexpected autobiographical details.

“That house there,” he gestures, “I knew a girl who lived there. I used to break into her bedroom and sniff her panties. Wherever she is today, God bless her.”

He takes us to the exact spot where the dismembered corpse of the so-called Black Dahlia was found, describing the scene in exact, enthusiastic detail. Admittedly obsessed with the infamous, still unsolved case–later the subject of Ellroy’s first major bestseller–he tells of visiting that sidewalk crime scene repeatedly when he was a child.

Later, Ellroy takes us to another crime scene, the spot where his mother’s own strangled corpse was discovered when Ellroy was just 10, as he recorded in his harrowing memoir My Dark Places. That 1958 crime, clearly the epicenter of the offbeat author’s grim preoccupation with death served bloody and grisly, was, like the Dahlia’s, never solved.

Whatever demons drive Ellroy, he is clearly driven to entertain, and throughout the never-boring 90 minutes of Demon Dog, entertain is what he does, and then some. He stares at the camera, facing us down. He shouts disturbing warnings about the imminent social and structural demise of L.A. He howls like a dog. He frequently addresses us as “hepcats.” But the movie is not just a demented literary freak show; it ultimately unveils disturbing truths about the thin line that sometimes separates madness from genius. We catch a tiny glimpse of the stark, seductive power of darkness.

By the end of the film, the author has taken us somewhere we never expected to go, probably never wanted to go. But as Ellroy’s last chilling howl fades away, we are oddly thrilled to have gone there.