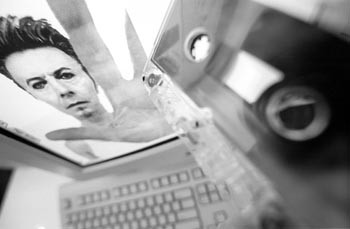 WHEN I FIRST began trading tapes via the Internet, I felt something like Daffy Duck waiting for his next comic book. There was the anticipation, the arrival, and the final thrill of popping a new cassette into my tape deck, wondering just what aural pleasures would greet me.

OK, so I admit it: I’m addicted to music, can’t help it–it’s in my genes. I’ve made cassettes for friends and parties for years because I love to share good music, having been a college radio DJ. But my musical life changed greatly when I moved to Sonoma County about three years ago. Suddenly I found myself without my old urban resources for hearing underground music.

But my initial motivation for surfing the Net was to find web sites that might link to that of Neosoreskin, the ska band I was managing at the time. I immediately found myself lost in a miasma of information without a clue to how to sort through it all.

It was kind of like walking into a warehouse full of really great goodies but no rhyme or reason to how things were stocked.

Back to square one–go with something I already know: David Bowie. I found fan sites about the man, and his own official site. The first few I checked out had bulletin boards for exchanging ideas about lyrics and how to get concert tickets and all things Bowie. In my searching, I had a few experiences that launched me headfirst into trading tapes.

First, I made contact with a woman from Japan named Tomoko, whose web site is linked to a Bowie page. Looking at her site, I found a few uncanny similarities in our musical tastes. I decided to e-mail her. We soon were communicating regularly and discovered we were about the same age and had similar interests on a variety of levels.

I sent her a Neosoreskin CD. She sent me a tape of some Bowie music and a poster that she’d worked on.

My appetite whetted, I next found myself in a chatroom that was supposed to be dedicated to music. Chatting is an odd thing. My first few experiences were less than thrilling–people talking about their messed-up lives, people looking for cybersex, and others just there to stir things up.

Thankfully, I met a handful of sincere people who were genuinely in the room to discuss music. I quickly discovered that the best way to unearth such folks was to name drop the names of a few of my favorite bands and see who responded. Worked like a charm.

When I mentioned Bowie, old punk-rock bands like the Dead Kennedys, and arty Goth bands like Bauhaus, I discovered there were actually quite a few chatters who did want to talk music. One of my first chat trades was with Frank from New Jersey. Though a big Sinatra buff, he was also interested in new music. So I sent him a Neosoreskin CD and a mixed tape. In return, he sent me a collection of Sinatra and big-band tunes.

Be forewarned: chatting is time consuming, and I had loads of free time when I initially got into it. Making tapes for people can also take up a lot of time, especially if one wants to make a cohesive compilation of a variety of artists.

I’m a nitpicker and won’t send anyone a tape with uneven sound levels or songs that get cut off at the end of one side. I make tapes much as I used to plan my radio shows: pull out far more music than I need and figure it out as I go. When the tape was completed, a trip to the post office was in order since, for example, I’d no clue to how much it costs to ship a tape to England.

The types of recorded material traded over the Internet range from made-at-home compilations and concert bootlegs to out-of-print releases and band demos. Many lesser-known bands thrive on people trading their material just to get heard.

However, copyright issues are not to be taken lightly, as demonstrated by the recent slugfest between Metallica and the online music company Napster. Music publishing companies such as ASCAP or BMI are adept at monitoring public performances of artists who are under their wing, and they take it very seriously when someone sells unlicensed material.

“It’s a [legal] gray area,” says Greg Loescher, editor of Goldmine, a popular record collector’s magazine. “According to the law, if taped for home use or to give to someone, it’s OK. If it’s for a tape exchange, that’s a gray area. Obviously the industry as a whole would rather someone purchased music from a retail source. The danger lies in what the legalities and ramifications of taping are. . . . People think that just because they can tape music it’s OK to use it in any way they see fit.

“Some bands,” Loescher continues, “such as the Grateful Dead, encourage taping at concerts. But it’s tricky if done by other means, shuffling off the Net, etc. We have people who trade using [ads in] our magazine, so it’s not that we’re against it.”

It’s obvious that recording artists and their labels are more focused on the threat posed by the latest trend–MP3s or digital-audio recordings available on the Net.

“The problem is not just trading songs but full albums off the Internet in digital format,” says Ron Rodrigues of Records and Radio. “Control of intellectual property is lost if the sound is as good as on the album.”

As for tape trading, Rodrigues agrees that “it’s not a top concern in the industry. However, taping something for someone else does go against copyright rules.”

LEGAL QUIBBLES ASIDE, tape trading offers something MP3s do not–the fun of making personal connections around the globe. I’ve traded with people from England, Japan, Australia, Canada, and all over the United States. Of the people I’ve interviewed, most traded internationally as well. Brazil, Germany, Holland, Czechoslovakia, Russia, and Switzerland were mentioned. Additionally, I’ve also found that the United Kingdom is oozing with fellow traders.

Most people I queried have been trading for about two years–some for as long as four years, others for only a couple of months. I’ve traded with people between the ages of 19 and 40. Some of the best tapes have come from college students who are completely immersed in the independent music scene.

One of my favorite tapes came from an advertising student in Toronto named Kevin. He had his own fanzine and sent a very comprehensive tape of Canadian bands. Susan, from Australia, got involved with trading tapes over the Net because of her love of the band Mr. Bungle. Despite a dedicated following in Australia, their material isn’t always so easy to find there. Susan and I share a love of an ’80s Aussie band called Hunters and Collectors, which is what got us chatting originally. I almost dropped my teeth on the floor when she mentioned Mr. Bungle, whose members hail from Arcata.

Tape trading not only fills a musical void; it’s introduced me to interesting people from around the globe. Though I have less time for it these days, I’ll always be trading with someone I’ve connected with. As for copyright worries, I have none. Gray areas work well for someone like me who trades to promote music, not profit from it.

Right now, I’m pulling some music from my collection to tape for a young man in England. How could I resist yet another opportunity to share music I think is wonderful with an attentive audience?